Is Tucker Carlson a White Supremacist? 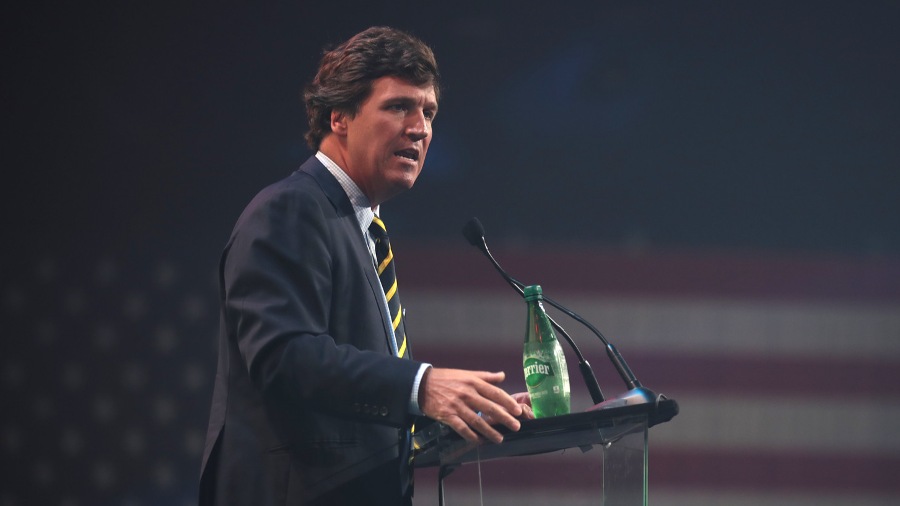 A white racist in Buffalo shoots up a store filled mostly with African-American shoppers. An elderly Taiwanese of Mainland Chinese descent attacks congregants at a Taiwanese Presbyterian Church in California. A paranoid black man in Dallas goes after Asians in a hair salon. Other atrocities may have reached the news by the time you read this.

How should we react to these crimes? Why, obviously, call Fox News host Tucker Carlson a “racist,” or a “white nationalist”! Have you seen how he fueled the Buffalo shooting? Adam Gabbatt at The Guardian explains:

As details of the Buffalo mass shooting emerged over the weekend, much of the media focused on the shooter’s self-stated motivation: his belief in ‘great replacement’ theory, the racist notion that white Americans are being deliberately replaced through immigration … Fox News’s most popular host, Tucker Carlson, has pushed the concept of replacement theory in more than 400 of his shows — and has arguably done more than anyone in the U.S. to popularize the racist conspiracy.

With that same tag line — “Carlson ‘not sure’ about White Supremacist theory he pushed 400+ times” running across the bottom on the screen, Former Fox political correspondent Carl Cameron argued on CNN that Carlson should be arrested — to start with:

Sooner or later the law enforcement and the U.S. government is going to have to stop the lying. The fact of the matter is, if you disturb the peace by starting a riot in a movie theater, cops are going to arrest you and you might end up in jail or you might end up in something worse.

Something worse? Like what? Water-boarding? Lynching? But if the American government scraps the Constitution and starts arresting or torturing liars, Gabbatt and Cameron had best watch their own backs.

I know Tucker’s schtick. I scoff at much that he says, but watch him almost every night, because sometimes I find his perspective invaluable. So I know that he does not push a “racist conspiracy theory” that “white Americans” are being replaced through immigration. That is, itself, a bald-faced lie. Or rather, a series of lies linked together, both in what is included and what is left unsaid.

We’re freedom-loving Americans. We think truth has its own power.

First, Carlson’s critics ignore the fact that the man is trying to explain a real phenomenon, or two of them, actually: the astounding flood of illegal immigration since Joe Biden took power, and the remarkable reluctance his administration has shown in stopping that surge. Millions of aliens have poured across our southern border. Some have brought drugs, even sex slaves. Democrats baselessly accused border agents, many of whom are Hispanic, of whipping and abusing the invaders. Meanwhile they sit in Washington doing nothing to stop the flow.

So, what brought about this rush on the border? Tucker Carlson argues it is a deliberate plot by the American Left to strengthen the Democratic Party, and to lower wages for the convenience of corporate big-shots.

Carlson has strongly emphasized, time and again, that he is not concerned just for “white Americans.” Carlson says clearly and often that his concern is for Americans in general. He has argued repeatedly that black Americans have the most to lose, since they are more likely to see their wages undercut by poor migrants.

So this repeated claim that Carlson is just speaking on behalf of “white Americans” is a bald-faced lie. But it is also a predictable lie. These “journalists” need that lie to weaponize young punks’ mass murders against their political enemies, and against Americans’ God-given right to speak our minds.

Carlson’s critics curiously neglect to ask: Is he wrong? They also ignore the evidence which Carlson cites in support of his claims.

The evidence he cites is often ambiguous, I concede. But the Left gloats over the demographic decline of “whiteness,” a term that hisses from their mouths like a curse from Voldemort. They celebrate the supposed coming of a permanent Democratic coalition. They’ve elected a president who opened borders and let everyone and his sex slave or pack of fentanyl in. One hundred thousand Americans died of overdose last year.

Do those lives not matter? But if anyone raises an eyebrow, even while explicitly saying, “This will hurt African-Americans worst of all,” they can only be a white supremacist. And an accessory to murder.

Those are the most obvious aspects of their dishonesty. Our nanny-censors refuse to publish the punk’s manifesto, in keeping with the Left’s new-found hatred for freedom of speech and contempt for the intelligence of the American people. Those details have leaked out, though, and we now know what Gabbatt, Cameron and friends neglected to mention. The killer in Buffalo explicitly denied being either a conservative or a Christian. He never mentioned Tucker Carlson in his long manifesto.

Carlson’s critics also fail to mention that almost no country on Earth allows millions of unvetted foreigners to pour across its borders, as Joe Biden and his party have done.

Carlson has repeatedly emphasized that he does not blame these invaders for wanting to come to America. I have never heard him say a negative word about their ethnicity. Would it be “racist” to mention that many of those fleeing (or pretending to flee) come from crime-ridden barrios in Central America or Port au Prince?

Promoting a Narrative — and Ignoring the Facts

Carlson’s critics focus on rare murders that fit their narrative, and ignore the rest. They put up yard signs reading “Black Lives Matter!” while ignoring two thousand more black Americans who died of street crime in one year, compared to the year before those signs went up.

Mass murder is spectacular. It’s understandable that the Press would give it much attention. According to FBI statistics, though, the vast majority of murders in America are intra-racial. Interracially, black-on-white murder is more than twice as common as white-on-black murder.

But the Democratic Party needs white racism like a heroin addict needs her next fix. Again and again, as I showed in Letter to a “Racist” Nation, journalists across America “cry wolf” at “white supremacist” incidents, which consistently turn out to be nothing of the sort. But owning the Media means never having to say you’re sorry, even if ten thousand sheep are eaten by poachers on your own team before the first real “wolf” shows up.

Like scare tanks at Monsters, Inc., the Democratic grid can run for months on the fuel of a single white racist incident, real or imagined. Talk about shouting “Fire” in a crowded movie theater! It is not metaphor, but apparent reality, that several theaters worth of Americans have died due to the lies about police that the Left told in 2020.

How it must disappoint the likes of Gabbatt and Cameron, not to have a genuine white supremacist on TV every night to justify canceling and imprisoning their enemies, or at least to keep Hispanics and blacks on Nancy Pelosi’s woke reservation.

Truth Has Its Own Power

A strange white supremacist Tucker Carlson would be, to welcome so many black, Hispanic and Asian guests on his show. Carlson simply holds the odd belief that American government should look out for the interests of American citizens of all races. He doesn’t seem to believe in locking people up because they disagree with him, or even because they “lie.”

How fortunate for Democratic pundits and politicians! We on the Right don’t want to lock up those who lie, endlessly and shamelessly, about the police, inflation, the Constitution, border security, Russian collusion, “Jim Eagle” racial suppression, “Don’t Say Gay” bills or even Tucker Carlson’s supposed racism. We’re freedom-loving Americans. We think truth has its own power. We’d rather just refute your lies, if we can get the facts past your increasingly shameless censors in tech, the academy, government, and the Media.

But take heart. At least you still have statues of George Washington to kick over.

David Marshall holds an undergraduate degree in the Russian and Chinese languages and Marxism, a masters degree in Chinese religions, and a doctoral degree in Christian thought and Chinese tradition. He is the author of Jesus is No Myth: The Fingerprints of God on the Gospels.