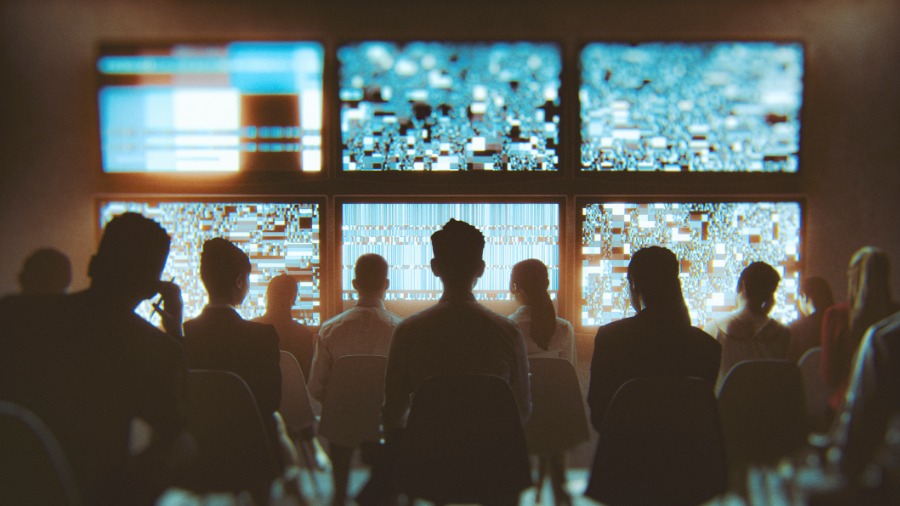 DIRECTV has a channel called “news mix.” It is a four-way split screen that allows me to watch four different news channels at the same time. I can only listen to one at a time, but I can toggle back and forth between the channels for the audio.

These four channels are not always the same. For the several weeks immediately preceding and following the election, however, they included: CNN, MSNBC, FOX, and Newsmax. The various prejudices of each station were blatantly obvious when watching them in that format.

They Urged Democrats to Relax

Prior to the election I watched the standard pro-our candidate/anti-their candidate spin on all the channels. The day of the election came with the stereotypical calling of “our” candidate’s states early and “their” states late. While these contrasts proved to be interesting, it’s been the reporting since the election that has demanded my attention.

As Election-night Tuesday rolled into the early hours of Wednesday morning, I saw two incredibly strange interviews on one of the liberal channels. Democratic strategist, James Carville was one, and former RNC Chairman turned Trump Derangement Syndrome sufferer Michael Steele was the other.

Their messages were almost identical. They addressed the Democratic base somewhere between 1 and 2 a.m., as I started getting ready for bed. Trump had a comfortable lead in Georgia, and was several points ahead in the other four swing states, with something over 90% of the precincts having reported in. To me the election was over and Trump had won handily. Yet, both Carville and Steele were smiling and calm, urging Democrats to relax.

“Don’t panic,” they both said. Not in the reassuring way of someone losing a contest, but almost as if they possessed some secret knowledge that would change the current course of the election.

I awoke later that morning to find all five swing states back in play! One of them switching would have been a shocker to me. Two would have seemed highly unlikely, bordering on suspicious. All five? Suddenly the Carville/Steele interviews felt more like an eerie foreshadowing.

I have witnessed 11 Presidential elections and have never seen a redirect like that. I suppose technically this kind of massive shift is not entirely impossible, but it is highly improbable.

Needless to say, as the day progressed, I remained glued to the election results and the analysis thereof. I watched the CNN broadcaster dutifully explicate the political constituency of micro-jurisdictions, in an attempt to explain away what seemed like an impossible Biden surge. Eventually, I was listening to the “conservative” station interview various poll workers who, despite having proper paperwork, were not allowed in the vote counting facility. If they were, they were kept at such a distance that they effectively could not see a thing.

At that exact same moment, I read a scroll on the “liberal” station that said there is absolutely no evidence of voter fraud. I remember thinking, “Really? Because I’m looking at it!”

Even so, the MSM message resonates. The other night, at my weekly poker game, half the table was practically ridiculing the other half for believing in this “voter fraud conspiracy.” We know for a fact that voter fraud happens in other countries. What’s to stop it from happening here other than extreme vigilance? We should always be checking the integrity of our voting system.

Now, one abnormality can be ignored; possibly even two. Not thirteen. And certainly not over 500! At minimum, that calls for an investigation. Both sides should demand this investigation, regardless of how they feel about Trump. If the main stream media want to cast doubt on the veracity of these allegations, fine. But to report that “there is absolutely no evidence of voter fraud” is inexcusable, and patently false. There is a big difference between reporting a story with a spin on it, and bald-faced lying.

If Trump’s claims are false, throw him in jail. But if voter fraud led to the election of Joe Biden, and this fraud is allowed to stand, then our country is already lost.

More tellingly, the left’s exaggerated sense of outrage at the very idea of a recount belies the confidence with which they reject even the possibility of impropriety. Why should a recount be an issue? If you reject the notion of voter fraud entirely, then there are only three possible outcomes: 1) there was no voter fraud, the count was correct, Biden won the election. Or, 2) there was no voter fraud, legitimate mistakes were made in counting, Trump won the election. No one should have a problem with these two. They both guarantee no fraud was perpetrated and therefore the outcome of the election is legitimate.

The big problem exists behind door number three. 3) Trump is using the recount to manipulate the outcome of the election. But this puts liberals in a Catch-22 scenario, because even though this takes place after the election, it would still be considered voter fraud. The very thing the Dems claim isn’t possible. Therefore, to be worried about this potential outcome is to admit that voter fraud is possible.

Why is This Important?

This is important because no less than the very essence of our country hangs in the balance. If Trump’s claims are false, throw him in jail. But if voter fraud led to the election of Joe Biden, and this fraud is allowed to stand, then our country is already lost. It is not “on its way out” or “going downhill,” it is over and done with. Finished. We will have joined the ranks of third-world dictatorships where tin-pot tyrants get 98% of the vote in a “fair and honest” election.

Where a government “of the people, by the people, and for the people” will have perished from this Earth. And, one person, one vote, will be nothing more than the lingering after-taste of a distant, glorious past.