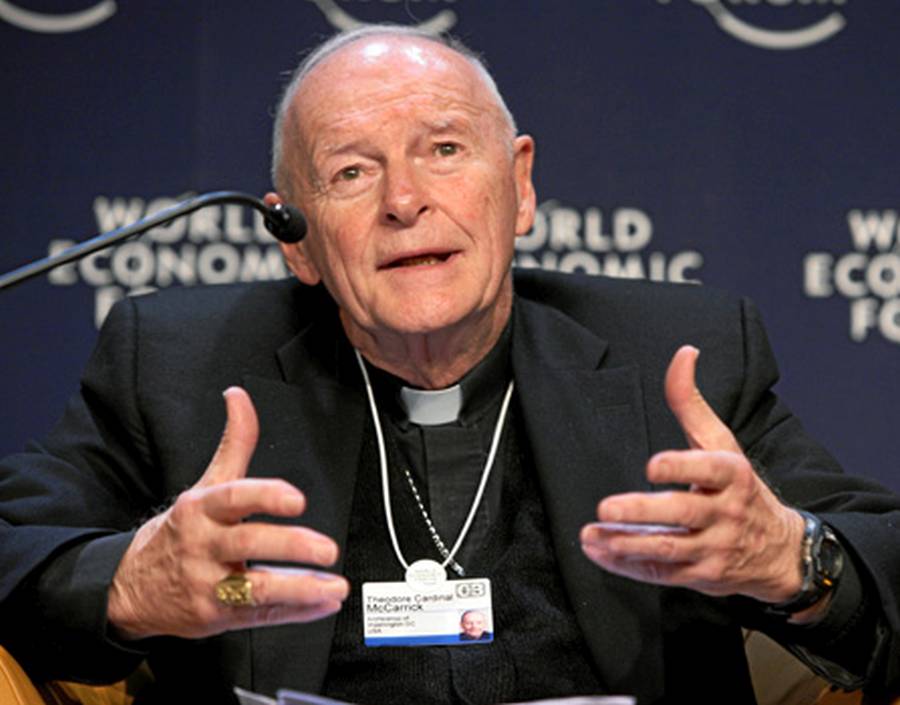 I knew the so-called “McCarrick Report” would be coming out. As the time approached, I struggled with myself. Would I even read it — let alone comment on it? I suspected it would prove disturbing for me to sift through, just as the “Pennsylvania Report” was in 2018. I never even met  the former Cardinal Theodore McCarrick, who sexually harassed seminarians and abused a boy he’d baptized as a baby. But as a priest sex abuse survivor, McCarrick’s career became symbolic for me.

Like most men and boys (because sexual assault usually involves another male) I never reported my abuse. It was too shameful on one level. But I also wondered if it was my fault. Had I “asked for it”? The priest told me that “God made me gay.” I thought he was right.

That priest almost ruined my life. I can’t blame him for everything that subsequently happened. But he assuredly pushed me forward on a path that led directly to further deprivation and exploitation in the gay male community.

Will Justice Ever Prevail?

After the McCarrick scandal broke, Archbishop Carlo Maria Viganò published his famous “testimony.” It dared to name names — even Pope Francis himself — as complicit in the cover-up of McCarrick’s crimes. And I thought justice would finally prevail. In a strange way, I believed there would be vindication for me and the countless other nameless victims. That wasn’t meant to be, however —  allegedly for the good of the Church.

I started to read the new Report. Initially, I was plagued with bouts of PTSD, which continued throughout much of the first half of the “Report.” It included rather detailed descriptions from various priests and seminarians who’d been sexually propositioned and assaulted by McCarrick.

They didn’t for the same reason I didn’t. It’s the insidious nature of sexual abuse — particularly male-on-male abuse. Sadly, when you do reach out for help, sometimes, you are abused all over again. This scenario played out in the McCarrick Report.

An Unending Cycle of Abuse by Priests

Priest 4, a victim of McCarrick, goes to see a priest-counselor who was recommended by another priest. That priest-counselor sexually assaults Priest 4. At first, I couldn’t believe I was reading this, because it’s an aspect of my own story that I have rarely addressed — even in therapy. As an adult, I asked a priest for help. He knew I was a survivor. He knew I was vulnerable.

But he went about grooming me anyway, and then propositioned me. I was devastated. The violation of trust hurt almost worse than the original abuse. I’d allowed myself to trust someone again — and I got burned. Tragically, I believe it is nearly impossible for survivors to heal in the Church because so far the Church has refused to heal itself.

How Dumb Do Cardinals Expect Us to Think They Are?

This passage from the McCarrick report caused me to pause:

In an interview, Cardinal [Kevin] Farrell stated that, during his time as Vicar General in the Archdiocese of Washington, he occasionally heard “old rumors” about McCarrick having shared a bed with seminarians at a beach house when McCarrick was a bishop in New Jersey. Cardinal Farrell noted that the rumors were not about sexual activity and “didn’t ever relate to minors.”

Tobin [Cardinal Joseph Tobin of Newark] did check on the Internet and saw old allegations against McCarrick, which did not involve minors.

Does that make it okay? The fact that the victims were not minors? This seems to have been the attitude. I believe this remains the current position of many in the Church hierarchy.

Repeatedly, I have informed certain prelates about the ongoing problem of adult-on-adult predation in some of their parishes. Because this situation exists in a few predominantly “gay” parishes, the bishops do nothing.

Perhaps they think that gay men simply act this way. Maybe some do, but that doesn’t excuse their lack of oversight. According to a study, 46% of gay men have experienced same-sex molestation. This is a uniquely vulnerable population. I was a lonely boy and I was vulnerable. The bishops failed to protect me, as well as those before, and they are continuing to forsake every succeeding generation.

Shepherds of Public Relations, Not Souls

In addition, the McCarrick Report revealed that several high-ranking prelates knew something about McCarrick’s predilections. They showed themselves primarily concerned about the prospect of public scandal, however. In 1999, Cardinal John O’Connor of New York wrote a letter to the Apostolic Nuncio in the U.S. In it, he raised his apprehensions about a possible McCarrick promotion. He expressed worry not about priests abusing men, but that “rumors and allegations about the past might surface with such an appointment, with the possibility of accompanying grave scandal and widespread adverse publicity.”

Similarly, also from the Report:

In an interview, Cardinal [Giovanni Battista] Re stated that he spoke sternly to McCarrick in Saint Peter’s Square, telling him that he should be conducting a quiet life so as not to cause himself to be spoken of [sic]. When McCarrick protested that the allegations against him were false, Cardinal Re forcefully responded: “True or not true, the accusations exist! You, for the good of the Church, must not be going around.”

Here, in both of these instances, the main concern seems to center around the issues of scandal, bad publicity and how to protect the reputation of the Church. Within the miasma of these anxieties, the victims of sex abuse are forgotten. However, it goes further than that; they have even been ignored, dismissed, and silenced.

The priest who abused me told me that “God made me gay.” I thought he was right.

In the Report, a priest victim of McCarrick was advised by his bishop to keep quiet. When

[a]nother victim of McCarrick, named Priest 3 in the Report: “…finished describing the incidents, Bishop [Edward] Hughes advised Priest 3 to forget about McCarrick’s misconduct and to forgive McCarrick ‘for the good of the Church.’”

A Methodology of Silence

All crafty and devious predators adapt and adjust to shifting situations, and their methodology to keep their victims silent changes with it. In that pivotal year of 2018, Pope Francis accused priest sex abuse survivors in Chile of “calumny.” Later in 2018, he told a male priest sex abuse victim that “God made you this way.”

A priest told me that very thing over 30 years ago. It kept me quiet. Lately, especially since 2018, I have attended numerous conferences, lectures, and addresses, usually offered by priests or Catholic LGBTQ activists, that openly promote the theory of a blessed God-given homosexuality and even transgenderism. The particular targets of this message are minors.

From Nausea to Rage

This all takes place under the auspices of prominent U.S. cardinals and bishops. In the middle of one such presentation, I had to excuse myself and rush to the restroom where I vomited. I felt as if I were again in the presence of my abuser. I was truly frightened. Now I am just angry.

In the Report, Priest 4 said:

I spoke up at the time and I think that, if I had been listened to, things might have been different. I have what I believe to be justifiable anger and frustration because what happened to me makes it difficult for me to trust bishops, and I know that many other priests feel the same way.

I think I understand how he feels. If I ever had any trust for authority in the Catholic Church, it disappeared when, as an abuse survivor, I trusted a priest again, and he violated that trust. Since then, for the past 20 years, I have been a practicing, and what I would surmise to be a devout Catholic. But I often wonder if I am a hypocrite.

Because I do not trust for one minute those who supposedly Christ placed as my shepherd. Yet still there is also something rather naive and hopeful still inside of me. I keep waiting for them to make restitution, to admit their faults, and to somehow regain my trust. I wonder if the McCarrick Report was their last opportunity. They didn’t take it. Instead, they continue to protect the complicit and the corrupt —  including Pope Francis himself — for “the good of the Church.”