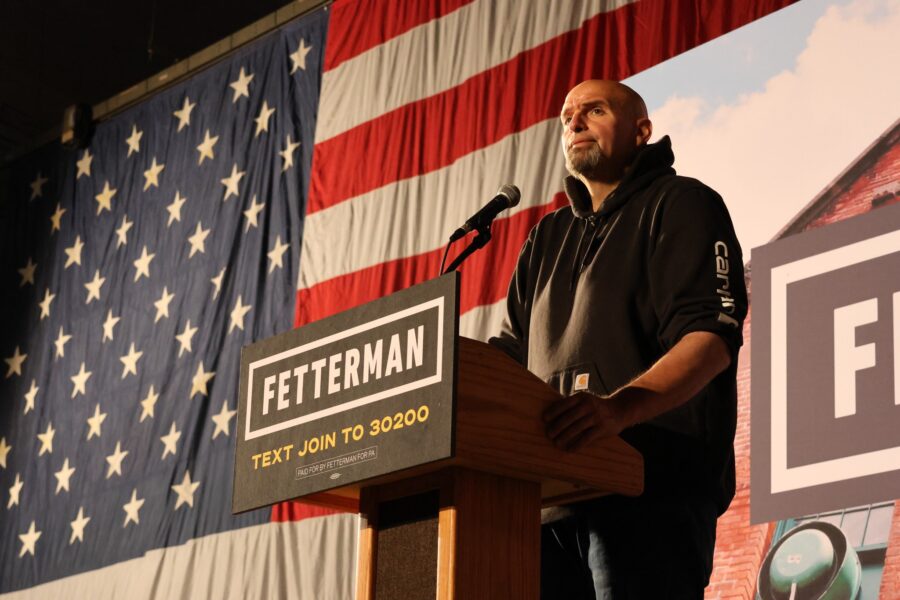 What’s the old saying? “Nobody who wants power that bad can be trusted with it.” I’m talking this morning about the vipers around John Fetterman, including his wife, the media and the Democratic Party. They’re so parched for power they pushed out onto a debate stage last night a man so clearly incapacitated that even pulling him out of a rehab facility constitutes cruelty. Imagine the cruelty they’d inflict on you.

Fetterman’s opponent is known around the globe as “Dr. Oz.” Yet the moderators referred to him all debate as “Mr. Oz.” It occurs to me in the gray pre-dawn they were doing Oz a favor. Had viewers been constantly reminded Mehmet Oz is a physician, they’d have spent the hour wondering why he wasn’t rushing over to Fetterman to render him aid. Yes. It was that bad.

Just days ago, NBC News correspondent Dasha Burns was trashed by the media and Fetterman’s wife Evita … I mean Gisele … for noting the difficulties Fetterman had with understanding small talk before their interview. She was an “ableist.” Other media types rushed in to bash Dasha, declaring how cognizant and together Fetterman was in their interactions. Even Dasha’s own colleague Savannah Guthrie jumped on her.

This morning they should be begging Burns’ forgiveness, and that of the citizens of Pennsylvania.

Yes. It was that bad.

And it got worse after.

The debate began with Fetterman saying, “Hi. Good night, everybody.”  In his prepared opening remarks.

He should have called it a night right then because it only went downhill from there.

The Fetterman vipers and defenders insisted before the debate that his issues were simply auditory. In the wake of his stroke he cannot (yet) properly grasp what he is hearing and speak his clear thoughts clearly. He’s fine when reading what’s being asked of him. Hence, the use of closed captioning. If he reads what’s being said, he can grasp it, and respond intelligently, even if what he says comes out a bit garbled.

Unfortunately, that wasn’t the case. All Fetterman offered was painful pre-programmed lines. Like repeated references to Oz’s “10 mansions” or “Oz Rules” … that “whenever Dr. Oz is on TV he’s lying.” There were no adjustments on the fly. No organic reposts to an Oz statement or moderator follow-up. No cleverness lurking the murky mumblings. No depth of thought, however difficulty expressed.

No moment crystalizes the evening better than Fetterman’s response to a question about fracking. Fetterman had said many times in the past he was against fracking. In 2016 he publicly supported a moratorium on fracking.

Yet when asked about it, Fetterman stated he’s “always supported fracking” and mumbled something about living across the street from fracking.

The moderator admirably followed up: “But there is that 2018 interview where you said, quote, ‘I don’t support fracking at all.’ So how do you square the two?”

So many different ways he could have gone. “Times change.” “Technology’s improved.” “The urgent need for energy independence.” “I was wrong.” He was only capable of the simple pre-programmed answer.

Think about it. It’s a debate in Pennsylvania. Asking about fracking is not exactly a gotcha question. How can he not have a better answer ready to go, however garbled.

Fetterman: “My doctors believe I am ready to be served.”

“Why won’t you release the records?”

Fetterman: “My doctor believes I am fit to be serving and I believe that is where I am standing.”

Again, no riposte. “Voters don’t care about my medical records. They care about my record of service.” Or “That’s between me and my doctor. Just like a woman’s right to abortion.” Or even, “My doctor believes I’m fit to serve. I promise If I can’t do the job I’ll resign.”

Again, not a trick question or a surprise. In fact, there wasn’t an odd or off-base question all night. Kudos to the moderators for that.

But for an hour it went. Painful response after painful response. Blown punch lines, insults, constant references to Dr. Oz’s wealth, and the depth of answers you’d expect from a seventh grader who tried memorizing a few answers the night before a test. Just a disaster.

Even the Daily Beast reports how a room full of Fetterman supporters knew they’d just seen the Hindenburg go up in flames.

Blame It on the Closed Captioning?!!

But as we said in the beginning, this isn’t about Fetterman … a very sick man in need of continued therapy. It’s about the cynical, power-hungry vipers who kept him in the campaign, insisted he was fine, and let him out onto the stage last night.

How cynical? How dishonest? How shameful? After the debate, they blamed Fetterman’s dismal performance on flaws in the closed-captioning!

Said Communications Director Joe Cavello, “He did remarkably well tonight — especially when you consider that he’s still recovering from a stroke and was working off of delayed captions filled with errors. John won countless exchanges, counter-punched aggressively, and pushed back on Oz’s cruelty and attacks.”

Statement from our parent company, @NXSTMediaGroup, in response to the @JohnFetterman campaign claiming he was “working off of delayed captions filled with errors” during last night’s Pennsylvania Senate debate on @NewsNation pic.twitter.com/PUT5ELfQ0C

In a statement, Nexstar confirmed the closed captioning worked flawlessly, and that it was “unfortunate that Mr. Fetterman is now criticizing the system.”

“Both candidates agreed to the technical set-up for the closed captioning process weeks ago, which was implemented at the request of the Fetterman campaign. Both candidates were offered the opportunity for two full rehearsals with the same equipment used in tonight’s debate; Mr. Fetterman chose to do only one.”

So he’s not only ill, he’s ill-prepared. Disinterested in doing the necessary work. And blaming others for his failure.

Not Fit for Washington

Fetterman is not fit to serve in the U.S. Senate. Heck, read closely and Cavello admits it. He called Oz “cruel.” The genial doctor from daytime TV. Cruel. Yeah, it’s a desperate effort at gaining sympathy for Fetterman. But even if Oz was cruel in the debate, that’s nothing compared to the Swamp. The Swamp makes Philadelphia sports fans look like the Vienna Boys Choir.

No, Fetterman is in no condition to serve. But more crucially, the people propping him up should not be allowed anywhere near America’s center of power.

The Brew: Can You Imagine Biden on a Bus?