EXCLUSIVE: Christians Have All the Money, People and Training Needed to Reach the World With the Gospel. We Lack Obedience — Conference Speaker 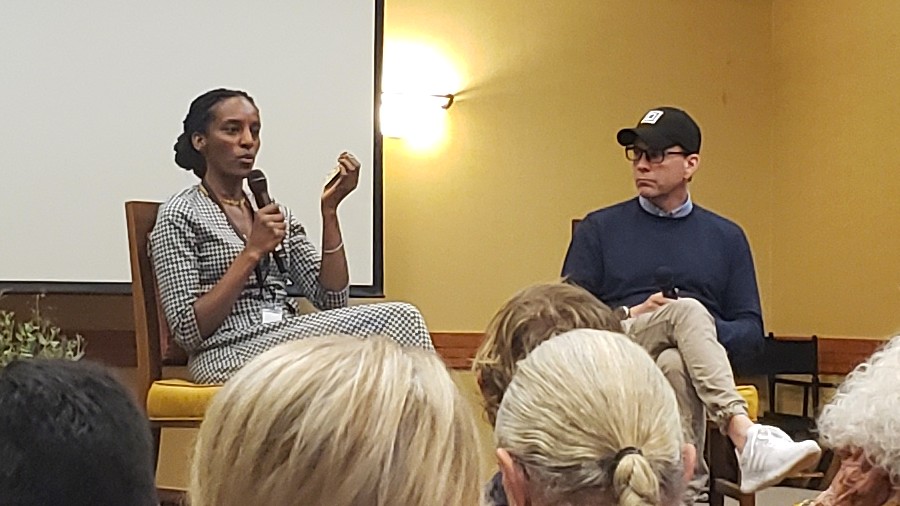 Eugene Bach, right, listens while interviewing Mariam Ibraheem, with whom he co-authored her autobiography, at the Dallas-area Voices of the Persecuted Church Conference, Oct. 23, 2022. Bach concluded the conference later that day with a message on misconceptions and truth about what the Church needs in order to reach every people group with the Gospel.

By Aliya Kuykendall Published on December 1, 2022 •

Editor’s note: This is the final part in a four-part series on The Voices of the Persecuted Church Conference. Find the series here.

MESQUITE, Texas — “All the things I’ve learned, I’ve had to relearn them again from the persecuted church.” That’s what Eugene Bach, who has a doctoral degree, told listeners at the Dallas-area Voices of the Persecuted Church Conference in late October.

Bach, who goes by a pseudonym because of his ongoing work in China, has authored or co-authored over a dozen books, including two from previous conference speakers: Esther Chang’s Smuggling Light: One Woman’s Victory Over Persecution, Torture and Imprisonment, and Mariam Ibraheem’s Shackled: One Woman’s Dramatic Triumph Over Persecution, Gender Abuse, and a Death Sentence. According to his bio, he “spends most of his time in closed countries attempting to topple governments by proclaiming the name of Jesus and not taking showers.”

Bach wrapped up the conference with a message on misconceptions and truth about what the global Church needs in order to reach every people group with the Gospel.

Why Haven’t We Preached the Gospel to All Nations?

Then Jesus came to them and said, “All authority in heaven and on earth has been given to me. Therefore go and make disciples of all nations, baptizing them in the name of the Father and of the Son and of the Holy Spirit, and teaching them to obey everything I have commanded you. And surely I am with you always, to the very end of the age.”

In Matthew 24:14, Jesus said: “And this gospel of the kingdom will be preached in the whole world as a testimony to all nations, and then the end will come.”

“The Christian church, and Americans in general, spend more money on Halloween costumes for their dogs than for completing the Great Commission,” Bach said.

Joshua Project, an organization that provides research on people groups with few to no Christians, says on its website that based on the Greek word for “nations,” the meaning of “nations” in Matthew 28:19 refers to “ethnic people groups,” not today’s political countries. Joshua Project says over 7,000 people groups are considered unreached.

Bach said that in response to the question of why the Great Commission hasn’t been completed, he often gives one of three answers, which he also called “lies.” He said these three lies and others are in a booklet he wrote called “The Six Lies I Tell at Mission Conferences.”

One such lie is that we need more money to complete the Great Commission. Bach said the issue is not that Christians lack money. “One third of the world’s population is Christian, but we manage and own more than two-thirds of the world’s resources,” Bach said. “Money is not our problem.”

Two-thirds of the world’s population are born between China and Jerusalem, and in the same area, 9 out of 10 people are not believers, Bach said. Yet, he added, only 1% of all mission funds goes to missions in that area, and only 2% makes it to unreached people groups anywhere in the world.

It’s also not for a lack of people that we haven’t reached every ethnic group with the Gospel. “It is more likely for you to die from a horse-cart accident than to become a missionary in the area between China and Jerusalem.”

“People are not the problem. We have all the Christians in the world. Just not many of them are willing to go.”

There are 75,000 churches, Bach said, for every one unreached people group.

“Do you know what country is the No. 1 country to receive missionaries? America,” Bach said. “Most missionaries that leave their home from foreign countries to go preach the Gospel come here to America, [despite] knowing that this area between China and Jerusalem is the most unreached area that desperately needs the Gospel.”

It’s also not that we need better training, Bach said. “Did you know that there are over 1,000 universities — top universities — just here in the United States that teach Christian theology specifically for missionaries?” He noted that missions training programs are easy to find online as well.

The previous conference speakers didn’t confirm the idea that Christians just need more money, people and training to complete the Great Commission, Bach said. “They talk about faith and obedience. They talk about, ‘God called me and I went.'”

Bach told the story of the Israelites crossing the Jordan river on dry ground by following God’s command to go stand in the river. “It’s obedience to God’s Word.” He referenced the story of Jesus feeding the 5,000, in which the disciples obeyed Jesus’ command to feed the massive crowd with only the little they had.

“It’s not by might. It’s not by power. It’s by my Spirit, says the Lord,” Bach said, quoting Zachariah 4:6. “And that is the only thing that will make a difference. And that’s what I heard over and over again from these saints who gave everything. It wasn’t through strength. It was through Spirit. And that I will take home with me, and I pray you will take home with you as well.”