This past weekend, an evangelical coalition backing President Trump launched in Miami. A minister for over 40 years, Pastor Mike Hayes shares his thoughts after attending in person. 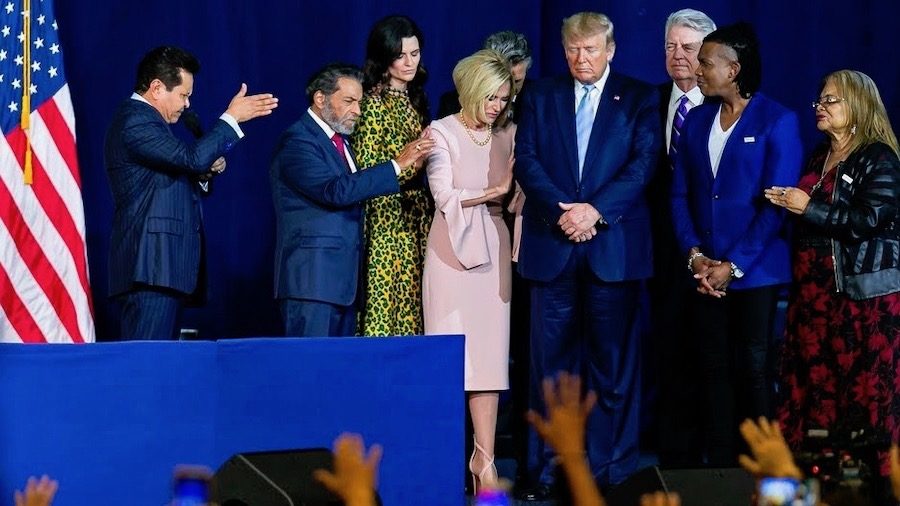 It was ten months to the day until Election Day.

“A nation without faith cannot endure,” said President Trump. “Because justice, goodness, and peace cannot prevail without the glory of almighty God.” His statements on pro-life policies and religious liberty were also a highlight.

This event publicly launched the Evangelicals for Trump coalition. The purpose was to talk to evangelicals about our concerns and the issues that are important to us.

Pastor Guillermo Maldonado has led Ministerio Internacional El Rey Jesús in Miami for over 20 years. To begin the gathering, he prayed for President Trump.

“We come together from all denominations, all races together, as the Bible says: to pray for those in authority,” prayed Maldonado. “Father, let your kingdom come. Let your will be done on earth as it is in heaven. I pray for our president to defy and challenge giants in the world and in this nation.”

Earlier, at a leaders’ reception, Pastor Maldonado spoke about his grid for supporting a candidate. So often, he said, people vote based on what party your parents were or culture or ethnicity — rather than truth. Yet, what you believe to be the truth, and which candidate most fits that, should be paramount.

Looking out over the large crowd, one could see a significant percentage of Hispanics, African Americans, and other minorities represented. I believe that is significant, as Christians and conservatives have not always navigated issues of racial equality and justice well — as I have shared previously.

What most people don’t know is what this Hispanic pastor was subjected to for his role at this gathering.

Responding to Vicious Lies Based in Fear

To be clear, this Miami church was not “hosting” the rally per se. The pastor and his team allowed the Trump campaign to rent their facility for this event. Even such a simple step led to massive pushback — locally and nationally — for this Hispanic leader.

There were rumors spread about deportation of people who may not be documented. These voices said the rally was a ploy by the Trump campaign to draw them together and then deport them all. What fearmongering!

Last Sunday, Pastor Maldonado actually had to make a statement to his church. “Do you think I would do something where I would endanger my people?” he asked. “I’m not that dumb.” He said that’s not going to happen and it’s not what this is about.

Pastor Maldonado heard from me and others that we’d pray for him, and I hope you will join us in that. Even apart from media potshots, the spiritual warfare he and others face is intense. I came to realize these issues are far more spiritual than we understand.

Speaking of the media, several publications ran with an out-of-context quote as their headline. “In Miami Speech, Trump Tells Evangelical Base: God Is ‘on Our Side,’” stated the New York Times. Other outlets followed suit.

Historically, I understand why that rhetoric is troubling to many. During my flight down to Miami, I was watching a documentary series on the Civil War. This exact issue grieved President Abraham Lincoln, who saw brothers fighting brothers and both claiming to stand on the Bible. It’s always a concern to decide in some sort of conflict which side you think God is on.

There are times when I cringe over certain rhetoric. But I recognize the principles and policies at stake matter more than a few misspoken words.

Only hours prior to the rally, the world had learned of a mission by U.S. military forces in Iraq to eliminate a violent terrorist leader.

“Qassem Soleimani has been killed and his bloody rampage is now forever gone,” said President Trump. “He was plotting attacks against Americans but now we have assured that his atrocities have been stopped for good.”

It can be taken wrong when a crowd cheers following a military mission like this one. Initially, Christians feel conflicted about the death of any person. But this was a ruthless Iranian General who had been personally responsible for carrying out attacks and terrorizing innocent people all over the world. Hundreds of Americans have been killed and thousands wounded because of his tactics.

These are dangerous times, particularly in Iraq where I have visited over the past year. Desperate times require desperate measures. It isn’t anything that anyone who is a Christian is happy about, but we’re thankful for being protected.

While in Iraq, I came to understand the plight of the Kurdish people — a group that General Soleimani particularly targeted in his campaign of death. Today, they rejoice over his elimination. Yet they also have justifiably felt abandoned, after fighting alongside our troops for over a decade.

The Kurds are great allies of freedom and the United States. They have been in that region for thousands of years, and I believe they need their own homeland. Even some leaders in Congress have recently taken up this cause.

Maybe it’s time for a fully independent #Kurdistan in what is currently Northern #Iraq? https://t.co/3SExH5WId4

Our hopes and prayers are with the Kurdish people. I encourage you to be watching and praying regarding current events in Iraq, Iran and Syria, which matter greatly in the big picture.

What Stance Christians Should Take

Our nation has entered a contentious election year. Yet most of us as Christians are not doing what the Scriptures command, which is to pray for our leaders. We must start with a commitment to pray every day for the President and our Representatives in Congress — of whatever party.

Often, our habit has become that we feel the need to have an opinion before we have prayed. I can be guilty of this too. Am I praying for my leaders when I pray every day? It’s really difficult to hate someone that you’re genuinely praying for.

Honestly, I don’t understand these Christians who absolutely hate the President. How is it justifiable from the Bible? When you pray for someone, you feel hope for them, you have a vision for positive change, and you believe for that.

I genuinely hope in the 2020 election Christians will conduct ourselves in a way that’s effective, exemplary and God-honoring. As people of faith, we act in this order: we study the candidate, their platform and their vision for leading. Then we pray for discernment, courage and wisdom. We take action by voting for the best choice of candidate we have been given, and then we rest peacefully knowing the rest is up to God!