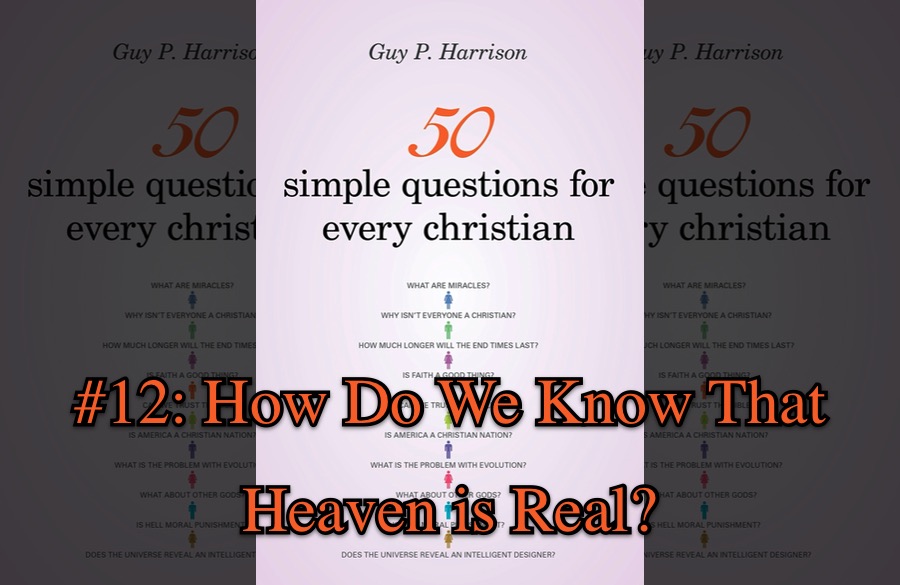 “Heaven is the most appealing promise Christianity makes,” says Guy P. Harrison. “It is central to the religion, the reason Jesus came to Earth and died for us. … But slow down! Why would anyone think this place really exists in the first place?”

It’s a fair question. And an important one. If we’ve learned anything from the current pandemic, it’s that we all face a limit; we’re not immortal. Death actually won’t come to most of us through this virus, but it will come. What follows it? What comes next? Pardon the irony, but right now it’s a very live question. Too bad Harrison blows right by the best answer, spending almost the whole chapter on another one, which he also gets wrong.

I’ll save the best answer for last. Since Harrison focuses most of his attention on near-death experiences (NDEs), I will, too, for at least a moment.

I know two men who have clinically died, been resuscitated, and reported powerful encounters with the afterlife. These experiences are not rare. Dr. Gary Habermas, who has researched NDEs extensively, says there have been millions of such reports, and they contribute evidentially to our confidence in life after death.

Harrison (naturally) disagrees. “Modern brain biology and psychology can provide reasonable and likely explanations for all these things,” he says. He stumbles, unfortunately, on that word “all.” Some, maybe? Sure. But definitely not all.

Habermas and others report clear, medically documented cases where the patient came back knowing facts they could not possibly have known by natural means. In his book on the topic, J. Steve Miller tells of doctors’ reports of great “detail and accuracy,” including a man who knew where the staff put his dentures while he was “dead,” patients describing medical instruments they’d never seen, and even blind people — blind from birth! — reporting what they’d seen while clinically dead.

What comes after death? Pardon the irony, but right now it’s a very live question.

Harrison may not know of these events. He says “stories are not proof,” which I’d call too obvious to bother mentioning. No responsible investigator thinks stories are proof. Blind people telling medical staff what they’ve seen, though? These accounts have been independently corroborated. They’re certainly not mere “stories.”

He’s got a story of his own: “the dying or oxygen-deprived brain is probably behind these events;” as in (for example), “the tunnel vision that occurs when the eyes don’t get enough blood.” The problem there is that the reports don’t match that experience. Unless thousands of people are lying, they’re describing a different phenomenon.

Could they be dreams or hallucinations? No, hallucinations are typically cut short; they end abruptly, and “dreams aren’t timed to end when we wake,” says Miller. NDEs, in contrast, typically end with closure, for example by a decision to “go back.”

And people experiencing these things are convinced they’re real. Unlike a dream, says Miller, it’s “completely convincing” to them: “As you can imagine, people who’ve had NDEs have analyzed their experiences relentlessly. But they consistently rule out vivid dreams or hallucinations.” Are we to tell all of them they don’t know what they’re talking about? If so, then how do we know that anything we experience is real and not a dream?

Wishful thinking, maybe? Miller tells of a researcher in the highly secularized Netherlands who found that 43 percent of those who reported NDEs there “hadn’t even heard of NDEs, much less believed in them.” Most of the population is “relatively confident that death is the end of everything,” so there’d be little motivation for them to conjure up a different outcome.

Near-death experiences are fascinating, and the videos I’ve linked to above are well worth the time you spend on them. Yet there’s an even better reason to be confident in heaven. This is the one Harrison dismisses far too quickly. It’s sad, actually. He quotes skeptic Michael Shermer,

It has been estimated that in the last fifty thousand years about 107 billion humans were born. Of the hundred billion people born before the seven billion living today, every one of them has died and not one has returned to confirm for us beyond a reasonable doubt that there is life after death.

Wrong. There’s one who has: Jesus Christ. In His case, one is plenty. He died and rose again, thus confirming His authority to say what He’d told His disciples a few days prior (John 14:1-4),

Reasonable doubt? That was last week. Jesus rose again. Others have been resuscitated, He was resurrected, never to die again. Others came back in the same mortal bodies; Jesus came back glorified eternally. And the best news? The day will come, too, when His followers will be like Him, for we will see Him as He is (1 John 3:2)!

That’s our great hope. It’s His gracious offer. Heaven is real, and we can be sure of it. But it’s a real destination only for those who are ready to go there, through faith in Jesus Christ. For others (this is question 40 in Harrison’s book, by the way) there’s a different and far less pleasant outcome ahead. Even now, though, it’s not too late to change your mind where you’re heading.

It depends on what you want, really. Someone once asked, “Suppose heaven was real in every way — no sickness, no death, streets of gold, living forever — except Jesus wasn’t there.” I’d be devastated. I’d feel cheated. No person has ever lived with such infinite, expansive love. There’s no one I’ve come to love more than Him. I want to be there where He is.

If that kind of love is what you want, and if you’ll trust Him for it, He’ll give it freely, and heaven is for you. Don’t wait!