50 Questions for Christians #11: ‘How Can We Be Sure About the Resurrection?’ 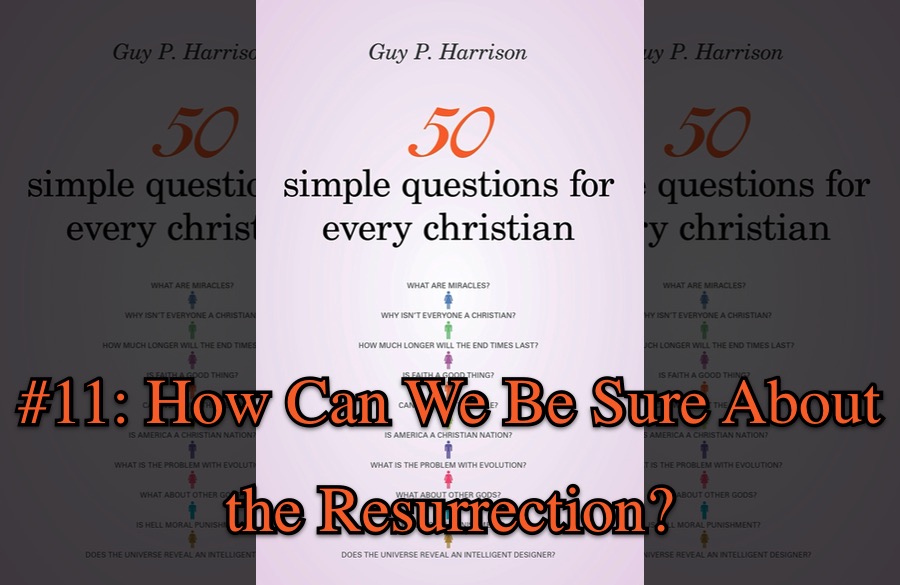 How can we be sure Jesus rose from the dead? Harrison’s question on that hits at a great time, with Easter coming soon. COVID-19 raises enough anxiety, too, that it’s great knowing God has power to turn something even as awful as the Cross into something as great as the Resurrection.

So how do we know? Let’s start with what we know. There’s a lot, even if we limit it to historical consensus even secular scholars agree on. As Gary Habermas wrote here two years ago, we can be very sure that:

There’s just one explanation that covers all those facts without doing violence to any of them: Jesus rose from the dead.

There’s more to be said, though. We have powerful evidence that the Gospels are reliable historical documents. They pass every test of manuscript reliability. Their historical claims have passed every possible external test, and their internal consistency is too solid to support any theory except that they’re reporting actual events. Whatever you may have heard about the Church “altering” them, or “so many different translations,” it’s simply not true.

Harrison hasn’t thought this through well enough. Neither have a lot of atheists.

Harrison tells us fringe religious cult leader David Koresh did, but his case is different in at least two ways. First, apparently it’s easy for fringe individuals to be deluded that one has some kind of ultimate truth. It’s harder to be repeatedly deluded about concrete events, for example that one’s friend has just had breakfast with you and several other friends.

Second, pride is a powerful thing. For Koresh to recant at the end would have been to humiliate himself among people who worshiped him. Suicide may well seem preferable to that. The record of Jesus’ disciples, in contrast, is one of humility. They viewed themselves as Jesus’ bond-servants. They certainly didn’t have crowds of supporters pressuring them to hold on to their beliefs at their deaths, either; quite the opposite.

But honestly, Harrison has this backwards. Follow the logic with me here, please. Lots of people make big changes without saying God is behind it, says Harrison, quite correctly. Paul, too, could have gone through this change of viewpoint without citing God as the reason for it. Yet he didn’t do that; he said he’d had an encounter with the living God, in the person of Jesus Christ resurrected. Paul didn’t have to say that, but he did. Why? The simplest answer is because he was convinced it was true.

Harrison hasn’t thought this through well enough. Neither have a lot of atheists.

Suppose your brother was missing and declared dead, but then he showed up for the funeral, and spent time with the family for a month and a half before strangely going missing again. The story circulates in your family until your sister writes an account of it some 25 years later. Do you honestly think anyone would say to her or to you, “You can’t convince me your brother spent those six weeks with you. Sure, you’ve got dozens of eyewitnesses, but they’re only eyewitnesses, and eyewitnesses can’t ever be trusted!”

Eyewitnesses should be tested, sure, but on major events like these, when they pass the relevant tests (as the Gospels do), they can be trusted.

Harrison also says, “We know that hundreds out of many thousands can experience similar dreams or hallucinations.” Really? What evidence does he cite for that? Thousands or millions of people “say they see ghosts each year,” he says. Sure, but that has nothing to do with people having long conversations and meals with a person, touching them, and being presented with “many proofs” that He is alive. As well as going through the experience with others at the same time.

Harrison closes his chapter with a final killer point: These are ancient documents by anonymous authors, so why trust them? He cites all kinds of things that can go wrong in journalism even today: misquotes, misspellings, twisted explanations.

He doesn’t know that historians — people who know how to assess ancient evidence — do trust them. That’s virtually all historians, at least to the extent we see in Habermas’s six points above. Harrison’s complaint here is just boxing the wind.

And if he thinks the accounts of the resurrection are on a par with misquotes and misspellings, he’s got a problem of missed perspectives. It would be like saying some journalists twist some facts, therefore Mark David Chapman probably didn’t shoot John Lennon. That’s just obviously wrong.

Maybe, though, he gets something more right than he realizes. “After more than twenty years of experience in television and print media, I can say with absolute certainty you can’t trust everything you see on TV or read in print.”

That’s for sure. I’d even call it his killer point: You can’t trust what he wrote here.

We Can Trust the Resurrection

Here’s what you can trust. We have ample evidence that the Gospel accounts are reliable history, and certain knowledge that the Church was born out of belief in Jesus’ resurrection. The early Christians changed their day of worship for it. It was a resurrection movement from its very first days. We have the six facts mentioned above.

And what do we have against the Resurrection? Harrison doesn’t say it, but you know he’s thinking it: “Dead people don’t rise; everyone knows that.” Well, of course. That’s what makes the Resurrection so spectacular! Dead people don’t rise — not unless there’s a God in heaven Who raises them from the dead. And that’s what happened. You can count on it.