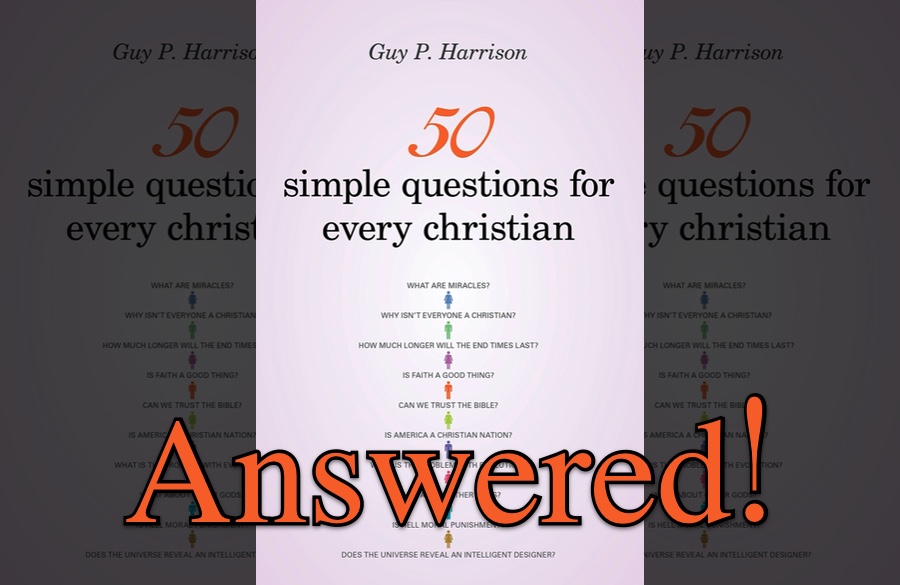 This Saturday I’m starting a weekly series, taking up a skeptic’s challenge to answer 50 Simple Questions for Every Christian. That’s the title of a book by Guy P. Harrison, a thoughtful skeptic who raises some good questions worth answering, and others that are at least representative of questions I hear over and over again on the atheist internet. (Which is all the credential he needs to be worth responding to, in this case.) I’m opening my series in advance here with an introduction and some ground rules.

Harrison has “50 simple questions,” he says; or at least that’s what the title implies. Amazon has a helpful Table of Contents listing his major questions, chapter by chapter. When I did a quick visual scan, though, I found almost 50 sub-questions in the first chapter alone. If that pattern continued through the book, that would mean thousands of questions, not just 50.

So I’m going to take one key question from each chapter and focus on that one alone. That’ll be enough to make the series last through this whole year. I’ll begin this weekend with chapter two. Harrison first chapter covers so much territory, it makes more sense to save it for a final summary article at the end of the series.

The title “50 Simple Questions” is in fact quite a misdirection. No question is “simple” if it it requires dozens of sub-questions to finish asking it! Spewing question after question is a great way to control a conversation, though. If you’ve ever debated religion online, you’ll find this quote, which my friend Dr. Timothy McGrew passed along to me last week, sounds eerily familiar — considering it was written in 1838:

Pertness and ignorance may ask a question in three lines, which it will cost learning and ingenuity thirty pages to answer. When this is done, the same question shall be triumphantly asked again the next year, as if nothing had ever been written upon the subject. — George F. Horne

Some things never change. What Horne couldn’t have known 182 years ago was how quickly a person could ignore an answer and ask another question. It doesn’t take a year anymore; it happens in moments now.

Harrison conflates various religions in his book. Chapter Two, for example, starts with the assumption that it’s possible to think of the Christian God is one of the gods of the world’s religions. He isn’t, for reasons I’ll focus on this Saturday.

Most of his book is focused specifically on Christianity, but where it wanders into “religion” in general, I will not follow it there. I have no interest in defending religions, only the one I believe is true, Christianity.

On a related note, skeptics often object that we’re “assuming” that our God is the real God. We might say, for example, that God is omniscient, that He knows all, and that this answers some question or other that they’ve raised. They might return, “But you’re only assuming that’s true of your God!” No, actually, we’re just defining our terms. We’re saying that this is who and what we’re speaking of when we use the word “God.” Talk about a God who doesn’t know all that’s conceivably knowable — apart from nonsense such as, “What would a triangle smell like if it had four sides?” — and you’re talking about some lesser god, not the God of Christianity.

Skeptics’ questions tend to fall into categories, two of which I really like to work with: Is it true? and How do we know it’s true? Many of Harrison’s questions, however, are in another category that’s not always helpful for anyone, including Harrison himself. These are the How could this be true? questions. Some of them are useful, but not all.

Harrison wonders, for example, how God could be an uncreated being. But asking how God could be uncreated implies asking what preceded God to make it possible for Him to exist without any anything preceding Him! It’s a self-contradictory question from the start.

Some questions are just unanswerable, and that’s okay. “How” questions are often impossible in many other areas besides theology. We don’t know how it could be true that photons exhibit wave-particle duality. I don’t know where or how I get a lot of the ideas I write about; they just come to me in ways I can’t explain. Human love is filled with all kinds of “How could this be?” questions.

Besides that, if God were the kind of being whose “How” questions we could answer in all ways, we would be the superior ones, not He; and at that point we’re not talking about God any longer, but some gross and blasphemous distortion of God.

No Smuggling, No Smothering

Finally, I have no patience — and neither should you — with skeptics’ attempts to smuggle their assumptions into Christianity. I’ve seen writers ask, for example, what “mechanisms” operate in the spiritual realm to make it possible. The answer is, if you insist on it being mechanistic, you’ve smothered the Christian worldview with foreign assumptions. The spiritual realm doesn’t have mechanisms, and if it did, it wouldn’t be a spiritual realm, it would be another version of nature.

Skeptics have to let Christianity be what it is, and not force it to fit into their anti-Christian worldview assumptions.

What good can I expect to come of this? I can’t do as Horne said, and write 30 pages here in answer to every question. Even if I could, I wouldn’t expect to convince every atheist, especially since a lot of them will ignore the answer until they come back and ask the same question next time around. Horne knew what to expect in that case, too:

We must be content with those of our friends who have honesty and erudition, candor and patience, to study both sides of the question.

I pray you will be one of those friends.

First in a series on 50 Questions for Christians