Women in Combat: What Repealing the Combat Exclusion Means for Our Military

This week was the deadline for the leaders of the armed services to issue their recommendation for opening all combat units to women, though these have not yet been made public and the major media have hardly mentioned it. Repealing the combat ban will not only harm women but weaken our effectiveness in combat.

You may think women are already serving in these roles; but there’s a world of difference between the combat zone and direct ground combat. Women have served honorably and well on deployments, but none who has been injured or died was in direct ground combat or on a combat mission. Performing well and bravely when engaged by the enemy is not the same as qualifying for the infantry. Returning fire isn’t combat, nor is surviving an IED on convoy. Combat is the ferocious, dirty and bloody destruction of the enemy at close quarters, often face to face and hand to hand.

Think about our foreign enemies from al Qaeda to the Taliban to ISIS raping and beheading their way across Iraq. Imagine your daughter there, not in support, but going after these bad guys where they live: hard, fast, with the greatest possible violence.

For infantry to achieve their top priority — victory with the fewest casualties — the combat arms require the best of the best, the toughest, strongest and fastest. When speaking of rates of injury or performance, we’re not comparing civilian averages, or military women to civilian men. We’re talking about trained and fit military women compared with not just military men, but the top one percent of military men.

This is the reality. The Marine Corps’ recent 9-month combat integration testing showed that the female participants had less strength, speed and shooting accuracy, and were injured more than twice as much as men. Coed teams underperformed on nearly 70% of tasks. Since close combat fights are often won on the margins, such disparity could be catastrophic for the units fighting our bloodiest battles at the front. We should be giving them everything they need, and clearing any hindrances from their path, not hobbling them with egalitarian social experiments. 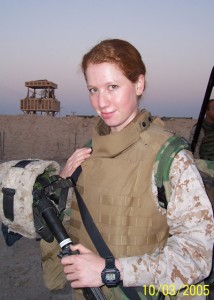 Judy Eden before heading out on convoy to checkpoint duty, Fallujah, 2005.

Military women, as tough, smart and able as they are, are not interchangeable with the men at the infantry level. Before even attempting men’s or infantry standards, military women are already experiencing two to ten times the rate of injury as men: feet, ankles, knees, hips, lower back, just to name a few.

What does it matter if one or two women can make the lowest men’s standards if they’re prone to more than twice the injuries and we have to break hundreds just to get those two? That means they’ll need to be replaced much more frequently than men, at great expense to both women and taxpayers. With quotas already demanded by General Dempsey, the military has to ensure not just that a few willing women can get the chance. They must guarantee a steady supply of such women.

Military service is not a right. No one “deserves” to be able to fight. The combat arms’ raison d’être is not to provide career opportunities, but to fight and win wars. The feminist politicians and military brass pushing this policy frame it as an equality issue because they can’t show that women truly benefit and enhance combat readiness. And because they can’t possibly prove that women can do whatever men can do, they dismiss the empirical data as inherently discriminatory. They want us to believe that women are strong enough for combat units, but too weak to pass men’s standards because of men’s (alleged) attitudes.

Their argument is basically this: we just need more leadership, and then women won’t suffer more than twice the injuries, underperform at 70% of tasks, and distract men. They say that men get passed “just because they’re men,” and women are excluded “just because they’re women.” Nonsense. Replace “men” and “women” with the physical ability each represents. Denser, larger bones, greater strength, stamina, speed and accuracy, much greater muscle-building potential vs. smaller, lighter skeletons, less aerobic capacity, upper body strength, speed, accuracy and stiff limits on the ability to build muscle. There’s no amount of leadership or attitude adjustment in the world that can change biology.

Even if it weren’t so, repealing the ban would still be expensive, untenable and deadly. Women on the front lines are at higher risk of capture and torture as high-value targets. They’re more susceptible to infection, need more accommodations to maintain hygiene, and, to state what ought to be obvious, are uniquely capable of getting pregnant.

Sexual tension and dynamics also dramatically weaken unit cohesion. Consensual or not, the spectrum from flirtation to rape is destructive and expensive enough in non-combat units. They spell calamity for the infantry. It’s not that men and women can’t work together. We can, but we’re not robots. Where the sexes are mixed, those dynamics are always in our faces. Relationships, jealousies, favoritism, fraternization, wanted attention, unwanted attention, sex and all its ramifications: these create emotional roller-coasters to units that are often isolated in remote areas with no privacy and no doors to lock. The combat units need this stuff like a hole in the head.

War is cruel, demanding and catastrophically dangerous. Women are not excluded out of some arbitrary patriarchal misogyny. It is nature who discriminates. While there may be a few highly atypical women who could pass the elite training, you don’t make policy that affects our national security and the entire population of young females based on the short-term performance of a few individuals.

Military leaders have to make decisions based on the facts on the ground, not on an ideological view of how they would like things to be. There is no job in the combat units that men can’t do, while there are plenty that women can’t do, or can’t do well enough and without lots of injury and other high risks. Where women are needed in the combat zone they are already being utilized and recognized.

Until now, a willingness to face combat reality has kept the combat exclusion in place. In the past the issue has been publicly debated, subject to presidential commissions and congressional oversight. Whenever put to a vote, America has vehemently rejected repeal. Yet all Leon Panetta had to do to enact this policy was to sign a memo. Where’s the outcry in Congress? Our representatives, who have apparently been rolled by political correctness, need to know that we will hold them accountable for subjecting women to conscription and weakening our military in the process.