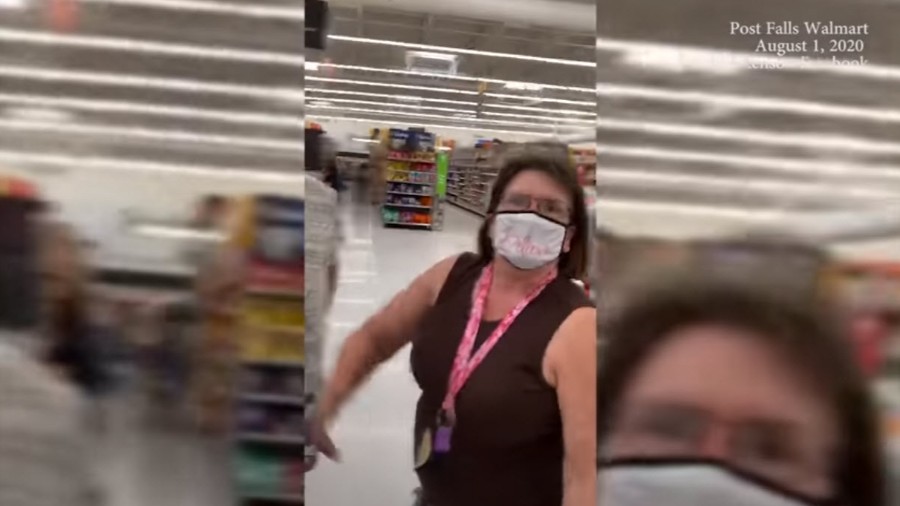 A middle-aged couple is under fire after they berated a group of teenagers and punched one of the boys because they were not wearing face masks inside a Walmart in Post Falls, Idaho.

“You guys are abusing your freedom. Stop it,” the woman said just before hitting one of the boys in the shoulder.

The North Idaho Exposed reports that police were contacted and the victim intends to press charges.

“You think this is cute not wearing a mask,” the man said. “Get a d— mask and put it on your face.”

The woman was literally screaming to anyone who would listen, “Their parents are teaching them this garbage.”

Jill Dickenson, the mother of the boys in the video, told North Idaho Exposed in an exclusive interview that she was infuriated by the attack. You can watch the interview by clicking here.

“My blood was boiling,” she said. “We live in a country that we have freedoms. We have liberties. For my kids to walk into Walmart and get apprehended and accosted the way they did — it’s uncalled for.

She was just as upset with the store’s management.

“Walmart did nothing about it,” she said. “The employees — some of them stood around laughing — mask shaming with this couple.”

Mrs. Dickenson’s son said he and his friends were asked to wear masks when they first walked into the store, but they declined to do so. The boys were still allowed in the store.

One of her sons told North Idaho Exposed that the couple approached them and immediately began harassing the boys.

“We hope your grandparents die of COVID,” the couple allegedly said.

When they came back, one of the boys turned on his cell phone and recorded the encounter.

“I was angry like any mom would be,” Mrs. Dickenson said. The mamma bear came out in me and I’m like, ‘Oh no she didn’t.'”

Just the other day a woman in Manhattan Beach, California threw a cup of hot coffee at a man because he was noshing a burrito unmasked.

“It’s hard to eat a burrito with a mask on,” the man tried to explain before his buddy was pelted by piping hot java.

It appears that a good many folks have come down with a raging case of China Virus Derangement Syndrome, and I’m afraid there is no known cure.