Why So Few Syrian Christian Refugees? For the Same Reason You Can’t Find Orphans in Haitian Orphanages 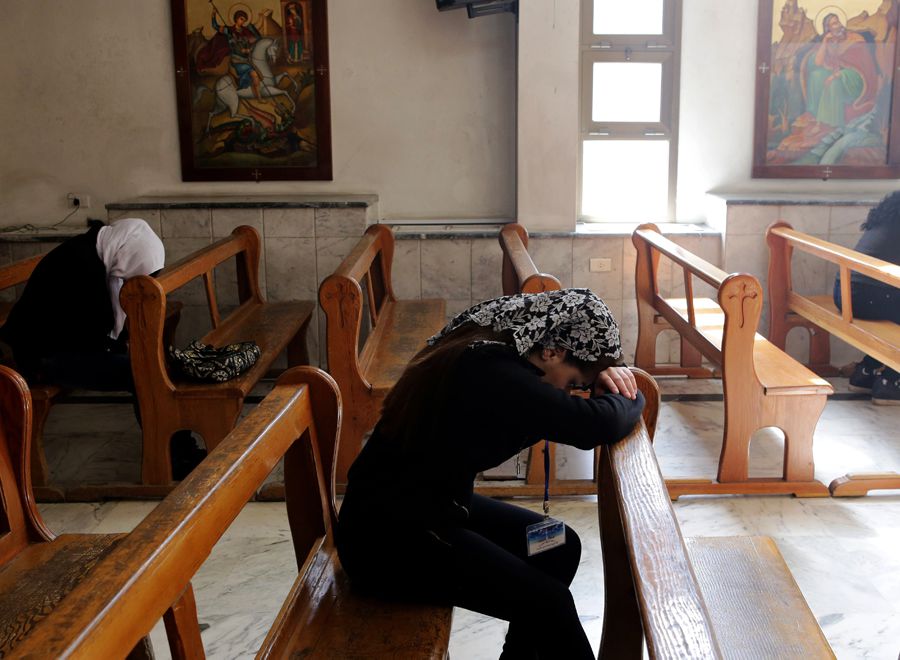 Displaced Assyrians, who had fled their hometowns due to Islamic State Group (IS) attacks against their communities, take part in a prayer at the Ibrahim-al Khalil Melkite Greek Catholic church in the Jaramana district on the outskirts of the capital Damascus on March 1, 2015. IS jihadists in Syria recently abducted at least 220 Assyrians, one the world's oldest Christian groups.

It seems bewildering that President Obama insists on opening the floodgates to Syrian Muslim immigrants even after the Paris terrorist attacks. It gets stranger. Ten percent of Syria is Christian, but on Obama’s watch, only about 2.5% of recent Syrian refugees have been Christian, and this even though — unlike their Muslim compatriots — Syrian Christians have nowhere in the Middle East they can go to be wholly free of persecution.

So why the stacked deck? No, Barack Hussein Obama is not secretly bowing toward Mecca five times a day on an Oval Office rug. There are almost no Christian refugees from Syria for the same reason there are almost no orphans in Haitian orphanages.

The Curious Case of the Orphanless Orphanage

That’s not a misprint. Orphanages are one of the last places you’ll find a real orphan in Haiti. I learned this when I was working on a documentary called Poverty, Inc., which (shameless plug coming) just won the 2015 Templeton Freedom Prize. We were in Port-au-Prince interviewing an evangelical couple who had moved down there a few years earlier to start an orphanage and adopt a child. They began by visiting some orphanages to learn the ropes and had even found an orphan child to adopt.

But then one day they asked about the nice Haitian lady who was coming every weekend or so to play with the little kid. Oh, that’s the child’s mother, one of the staff explained. The American couple was shocked. They thought they were adopting a true orphan, a child whose mother and father were dead or irretrievably lost and gone. But here was a loving mom, showing up every few days to dote on her child.

It turns out the mother brought the child to the orphanage because she was broke and didn’t want one more mouth to feed. The American couple, Corrigan and Shelley Clay, started investigating and found that this was typical. The vast majority of the kids in the orphanages weren’t true orphans. Each of them had one or two living parents, often ones who cared about them and stayed in contact.

We followed up by interviewing anthropologist Timothy Schwartz. He had lived in Haiti for some two decades, had published academically on Haiti and written the book Travesty in Haiti: A True Account of Christian Missions, Orphanages, Fraud, Food Aid and Drug Trafficking. As he explains in the documentary, he was paid to investigate the Haitian orphanage situation for a major international non-profit and was surprised to find that he couldn’t find any orphans in the orphanages.

Eventually, he says, it all made sense. Being an “orphan” in an American orphanage is a coveted spot. It means three meals a day, a decent bed, school and books, maybe even an adoption to the United States, which then means the “orphan” can eventually grow up to send money home to his parents.

And because it’s a coveted position, the last person with the connections and resources to navigate his way into an orphanage is an actual orphan! He doesn’t have a parent to work the system. He probably also doesn’t have any paperwork. So how does the orphanage even know for sure the kid is free and clear of any claim on him? The last thing the orphanage wants to do is adopt a Haitian kid out to an American couple and then find out the kid had a Haitian parent who most certainly did not want her kid adopted overseas.

The orphanages don’t conspire to keep out true orphans. It’s simply that it would take so much more effort to take in mostly true orphans. The rescuers would have to swim hard against the system to do so. So the orphanages essentially become free boarding schools — some of them undoubtedly doing a fine job, but not fulfilling what they originally planned to accomplish: rescuing true orphans.

Syrian Christians Disowned by Their Fatherland

As I said, this directly parallels the situation with Christian Syrian refugees. In fact, the parallel is eerily tight. Many Americans would happily have us take in some nice Syrians who have nowhere in the Middle East to turn, who are hunted, plundered, raped, sold and sometimes murdered. And since we have limited capacity in a world of more than 7 billion people, it makes sense to focus on those who have nowhere safe in the Middle East to turn. Yes, Sunni and Shiite Muslims persecute each other in the Middle East, but each group has Sunni or Shiite enclaves they can retreat to in the region. The Christians, meanwhile, aren’t even safe in the refugee camps.

So dangerous are the camps for Syrian Christians that they mostly avoid them. And the UN does its refugee head-counting in the refugee camps. If the Christians aren’t there to be counted, desperate as they are, then they don’t end up on the asylum lists the U.S. State Department uses for vetting potential refugees.

So, why doesn’t the White House take steps to find and include persecuted Syrian Christian in numbers at least proportionate to their slice of the Syrian population? Maybe the Obama administration just doesn’t care, but even if they cared a little, doing something serious about it would risk annoying the Muslim leaders of the Muslim-dominated countries in the Middle East.

As bad off as the Muslim refugees are, they aren’t without politically well-connected advocates in the Middle East. Many Muslim powerbrokers are happy to see Europe and America seeded with Muslim immigrants, and would surely condemn any U.S. action that appeared to prefer Christian over Muslim refugees, even if the effort were completely justified. By and large, they support Muslim immigration to the West and have little interest in seeing Christian refugees filling up any spaces that might have been filled by Muslim refugees.

The deck, in other words, is heavily stacked against the Christian refugees. The White House has been utterly feckless before the Muslim power structure in the Middle East that is doing the stacking, and has tried to sell that fecklessness to the American people as a bold stand for a religion-blind treatment of potential refugees —religion tests are un-American! It’s a smokescreen.

There is Still Time to Act

Those Christians, on the run for their lives, are the orphans in this geopolitical drama. Their fatherland has turned on them and disowned them. They are without powerful advocates on the ground to navigate them through doorways and into the queue for adoption to America.

President Obama should act, but standing up to bullies takes courage and resources. Finding the truly helpless in a system rigged against the helpless takes effort and commitment. There’s still time for Obama, working with Congress, to make that effort and that commitment.

Just as the United States heavily limited the flow of Jewish refugees for a time during World War II, so now the United States is failing to open the doors to the religiously persecuted Christians in the Middle East. But America changed its policy then, and we can change it now.

And, by the way, while some have tried to equate Jewish refugees back then with Muslim refugees today, that argument doesn’t work. Muslim migrants have many places to turn to in the Middle East. But like the Jews under the shadow of Hitler, today’s Middle Eastern Christians under the shadow of radical Islam have precious few options. For many of them in this vale of tears, America is their last best hope for refuge.

Jonathan Witt is managing editor of The Stream and author, with Jay W. Richards, of The Hobbit Party: The Vision of Freedom That Tolkien Got, and the West Forgot. Follow him on Twitter @JonathanRWitt.