Whoopi and Mel Remind Us: If There’s One Thing We Hate More Than Granting Forgiveness, It’s Requesting It 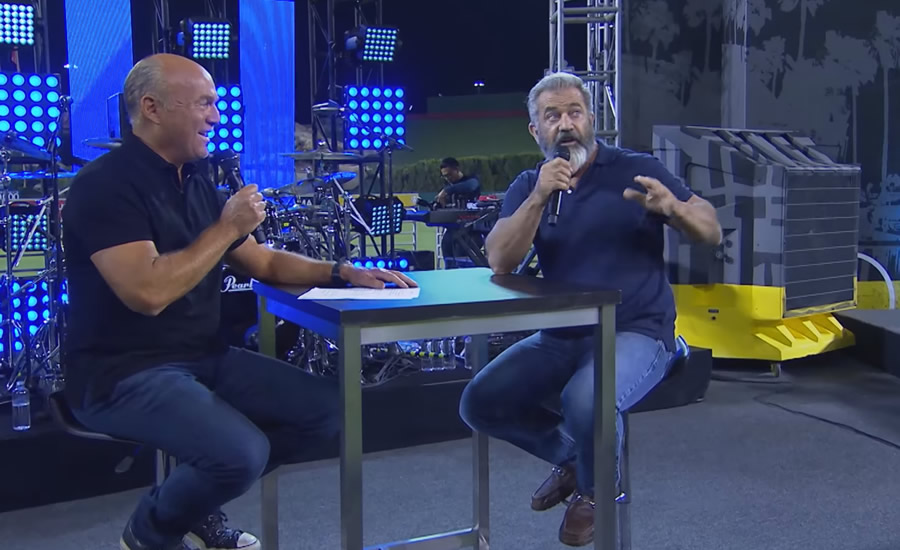 I was researching yesterday’s suitably scathing column on Whoopi Goldberg’s thunderously callous remarks about the Holocaust. Then I came across a short talk that changed my mood. It made me think of repentance, forgiveness, and our duty to welcome back a truly penitent sinner.

So of course I stopped reading it. At least, while I was still working up the dudgeon to unpack the false religion of Anti-Racism that Caesar keeps stuffing down our throats. No sense in ruining a perfectly good polemic. I saved the Prodigal Son redemption vibe for later, till I was done mocking the priests of Baal. One Testament at a time.

Now let me return to that short talk, and the thoughts it stirs. It appeared in a very good column at The Blaze, about some minor league actor who doesn’t want Mel Gibson to ever work again. You know, because of his ugly drunken behavior a decade ago, including racial slurs and violent threats against his second wife. The Blaze writer connected this actor’s plea for un-forgiveness to cancel culture. And then to the question of whether leftist Whoopi Goldberg would be quickly absolved, and Gibson left out in the cold.

The Price of Indulgences

Sadly, the answer is probably “yes” on both counts. Anti-Racism is a new, puritanical church without Christ, and its leaders can excommunicate or absolve whomever they wish. They only sell indulgences to those who share their politics, which depend on nursing old grievances and sowing lasting bitterness. Our entertainment industry, our Deep State, our schools and our corporations are all in the grips of this new civilizational death-cult. I don’t know how, short of a long series of miracles, we’ll defeat them. (Though thousands of angry truckers do give me some hope.)

But that’s not my subject just now. Let me quote the short talk I found in this column, and include the video. The speaker was actor Robert Downey, Jr., whom you might know as “Iron Man.” Some 20 years ago, he was more widely known as a “train wreck,” a hopeless drug addict whose addictions could wreck any project he got involved with. How many celebrities who actually kill people go to prison? Downey harmed only himself, but his drug-driven misbehavior was so in-your-face and notorious, that California prosecutors decided to put him away. For more than a year, in a real-life prison, not some rehab hospital with guard dogs.

Finding Sobriety in a Prison Cell

And that experience helped to change Downey, dramatically. He went from the arrogant, precocious son of Hollywood royalty — which he draws on in his brilliant portrayals of Tony Stark (Iron Man) — to something altogether different. Downey is now acquainted with desperation and sin. He ate alongside murderers, and bunked with arsonists. He had to quite literally face his very own demons, in the form of addictions that started when his father gave him drugs as a small child.

When Downey emerged from custody, unable to work in movies (since producers couldn’t insure him), who was there waiting to help him? His old friend, Mel Gibson. Downey (who is Jewish) told the story to a glittering Hollywood crowd, where he’d won the American Cinematheque Award. But he’d insisted on choosing the presenter who’d give it to him. And Downey chose Mel Gibson. Before Gibson could come on stage — quite possibly to a chorus of boos — Downey told the crowd what Gibson had meant to him:

When I couldn’t get sober, he told me not to give up hope, and he urged me to find my faith. It didn’t have to be his or anyone else’s as long as it was rooted in forgiveness. And I couldn’t get hired, so he cast me in a lead of a movie that was actually developed for him. And he kept a roof over my head, and he kept food on the table. And most importantly he said that if I accepted responsibility for my wrongdoings, and if I embraced that part of my soul that was ugly — “hugging the cactus,” he calls it — he said that if I hugged the cactus long enough I would become a man of some humility and that my life would take on a new meaning, and I did, and it worked. All he asked in return was that someday I’d help the next guy in some small way. It’s reasonable to assume that at the time he didn’t imagine that the next guy would be him or that someday was tonight!

Which of You Is Without Sin?

Despite a little profanity, it’s worth watching Downey’s talk in full:

A moving story. It helps that we’re sympathetic to Gibson because of the powerful patriotic and Christian movies he made — culminating with The Passion of the Christ. One parallel between Downey and Gibson is a father’s baleful influence. Gibson’s dad wasn’t a druggie, but a virulent conspiracy theorist who as late as the 1990s published a newsletter accusing John Paul II of being a false pope, the Antichrist, and the puppet of “global Zionists.” Imagine growing up with that. It might well shape the crazy stuff you say if you get blind drunk and have a breakdown.

Misreading the “Our Father”

Downey made a reference to Jesus’ own words in the Our Father, about “forgiving trespasses.” You know, “as we forgive those who trespass against us.”

We pass those words by quickly, but they bear some serious thought. It’s easy to misread them. For instance, I think Progressive Christians unconsciously interpret them perversely. They imagine that if they set lax standards and offer cheap grace, that will somehow force God to give the same to them. That’s why they’re so quick to damn the rest of us as “judgmental” and “Pharisees.”

I think there is real danger in premature forgiveness. Imagine if the Father in the tale of the Prodigal Son had searched him out in the city, while he was still wasting his inheritance, and handed over to him his elder brother’s portion as well — bankrupting the family just to fuel the boy’s habits. Progressives have offered that kind of forgiveness to countless celebrity rogues who share their politics, from Roman Polanski to Al Sharpton, Kathy Griffin to Jussie Smollett. God will not forgive the unrepentant, and neither should we.

I don’t find it hard to offer forgiveness to someone who’s actually penitent. I don’t know about you, but to me the more difficult part is admitting my own trespasses in the first place, accepting that I need forgiveness. Which of us wants to admit the broken, squalid, fallen parts of himself — and face them with stark honesty? Not this soldier, I can tell you.

And that’s why in Catholic parishes the Communion lines are oh so much longer than the lines for the sacrament of Confession. We’ve already forgiven ourselves, and moved on with our lives. We assume that the Lord is “mature” enough to do the same. After all, we’ve already forgiven Him for allowing all the suffering on earth, especially our own! (Or have we?)

Maybe each of us needs his own brush with prison, or scandal, or ruin. Like the Cross, it can prove redemptive.