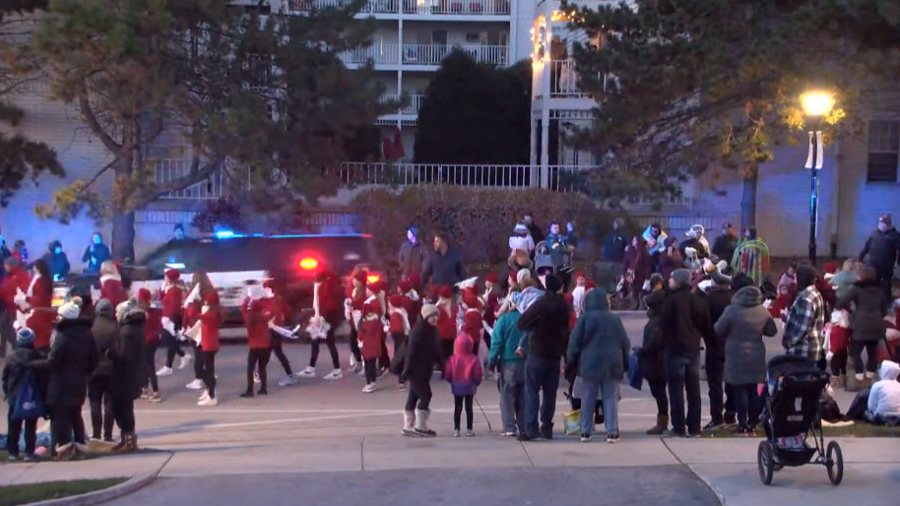 A screenshot from The City of Waukesha Facebook Live video shows events surrounding the tragedy at the Waukesha Christmas parade. A police car with lights flashing and sirens blaring speeds past a group of children who had been dancing in the parade and were quickly herded out of the way to let the vehicle pass.

As I write these words late Sunday night, the details of this tragic story are still emerging. What we do know is there are reports of “multiple fatalities” after a driver plowed his SUV at high speeds into a Christmas parade near Waukesha, Wisconsin, about 55 miles from Kenosha. It has also been reported that 11 adults and 12 children were transported to local hospitals.

What a devastating, terrible tragedy. And, if this was done intentionally, as appears to be the case, what an unspeakably evil act.

One moment, families are celebrating together, dancing and enjoying the holiday fun.

The next moment, there is blood in the streets and broken bodies on the roads, mingled with the sounds of wails and cries.

A Celebration Turned to a Tragedy

The Daily Mail reported that, “Corey Montiho, a Waukesha school district board member, told the Milwaukee Journal Sentinel that his daughter’s dance team was hit by the SUV.

“‘They were pom-poms and shoes and spilled hot chocolate everywhere. I had to go from one crumpled body to the other to find my daughter,’ he said.

And this: “One entry in the parade, the Milwaukee Dancing Grannies, posted on its Facebook page that ‘members of the group and volunteers were impacted and we are waiting for word on their conditions.’”

As described by a local police officer, “There were small children laying all over the road, there were police officers and EMTs doing CPR on multiple members of the parade.”

Where Was God When This Happened?

Naturally, at times like this, when the violence is so utterly senseless and so utterly cruel, it is only natural to ask, “Where was God when this happened? What was He doing?”

But the same question can be asked multiple times a day, all around the world.

Where was God when a family of four was killed by a drunk driver on their way to church?

Where was God when a rapist kidnapped, raped and suffocated a little girl?

Where was God when your spouse died of a terminal disease in the prime of life?

There are some who say that whatever happens is ordained by God. Therefore, we should thank Him for everything, including murder and rape and cancer.

I, for one, do not see this as the theology of Scripture, nor do I see this as an essential part of God’s sovereignty.

Nowhere in the Bible do I see believers praising Him for acts of rape and torture. Instead, I see them wailing over these things, asking Him to intervene and have mercy on the sufferers and bring justice on the evildoers. (Even when the believers recognized these tragedies as the results of divine judgments, they recognized those judgments as curses, not blessings, the fruit of sin rather than obedience.)

And nowhere in the New Testament do I see Jesus striking someone with a terminal illness as a sign of His great love and compassion. To the contrary, I see Him healing the sick and the oppressed. (If you’d like to study this subject in depth on an academic level, you can go here.)

What I also see are striking verses like these.

In Judges 10:16, after Israel came under judgment because of its idolatry, but then repented, God “could bear Israel’s misery no longer.”

And this description in Exodus 2:23-25, when the people of Israel were slaves in Egypt: “The Israelites were groaning under the bondage and cried out; and their cry for help from the bondage rose up to God. God heard their moaning, and God remembered His covenant with Abraham and Isaac and Jacob. God looked upon the Israelites, and God took notice of them.”

And this, from the prophet Isaiah, speaking again of the Lord’s relationship with Israel through history: “In all their affliction He was afflicted, and the Angel of His Presence saved them; in His love and in His pity He redeemed them; and He bore them and carried them all the days of old.” (Isaiah 63:9)

As for Jesus, Isaiah described Him in advance in these words: “He was despised and rejected by men, a man of sorrows, and acquainted with grief.” (Isaiah 53:3a) Or, in the words of the Letter to the Hebrews, “we do not have a high priest who is unable to sympathize with our weaknesses, but one who in every respect has been tempted as we are, yet without sin.” And that leads to these words of encouragement, “Let us then with confidence draw near to the throne of grace, that we may receive mercy and find grace to help in time of need.” (Hebrews 4:15-16)

He is Still Lord

Of course, the Lord of heaven and earth is not sitting idly by, doing nothing. In the midst of human chaos, confusion and pain, He is working out His will and plan (see Ephesians 1:11), working for the good of those who love Him (see Romans 8:28). He still sits enthroned as King, and He still rules as Lord.

But it was His will to create a world in which we have free choice, meaning that every single day, terrible tragedies take place, and the Lord allows them to take place. It also means that, because of the entrance of human sin into the world, there is sickness and pain and death.

In the words of C.S. Lewis, “Try to exclude the possibility of suffering which the order of nature and the existence of free-wills involve, and you find that you have excluded life itself. … Free will, though it makes evil possible, is also the only thing that makes possible any love or goodness or joy worth having. A world of automata — of creatures that work like machines — would hardly be worth creating.”

The reality, though, is that God cares deeply and He is suffering with us. Allow me to paint a picture for you to help underscore this point.

He is Suffering With Us

Imagine you are a devout Christian living in Haiti when a terrible earthquake hits, decimating your city. Thousands have been killed and thousands more are missing, many of them buried in the rubble. All electricity is out, the water system is polluted, and the city is plunged into chaos.

But you have survived, so you immediately join a rescue team, trying to dig people out of the debris. Yet your heart is bursting as you dig, forcing you to cry out, “Jesus, where are You? How could you let this happen? Don’t You care?”

Then, to your shock, you look to your right, and there He is. It is Jesus. He is on His knees, digging through the rubble as well, His hands torn and bleeding, as tears pour down His cheeks. At that moment, you say to yourself, “I don’t know why He didn’t stop this, and I have no idea who or what caused this earthquake. But I can’t blame Jesus. It’s obvious that He cares too!”

It was in that spirit that Pastor Tim Keller wrote, “If we again ask the question: ‘Why does God allow evil and suffering to continue?’ and we look at the cross of Jesus, we still do not know what the answer is. … However, we know what the answer isn’t. It can’t be that he doesn’t love us. It can’t be that he is indifferent or detached from our condition. God takes our misery and suffering so seriously that he was willing to take it on himself.”

That’s why Anglican leader John Stott stated, “I could never myself believe in God, if it were not for the cross.”

And it is through Jesus that God literally enters into our suffering, bearing our pain, carrying our disease, demonstrating His love, dying for our sins.

You may want to blame God for your suffering, yet here He is, coming into our world, standing right next to you, paying for our sins, pouring out Himself to death so that you and I can be freed from bondage and live forever. Obviously, He is not the one at fault!

What Was God Doing?

So, what was God doing Sunday night when lives were lost in Wisconsin? The same thing He is doing every moment of every day when human beings commit evil acts against others, from an abusive mother in the home to an abusive boss in the workplace, and from a crazed dictator in a closed country to an apparently murderous driver in Waukesha.

He is anything but a passive, disinterested bystander.

Several quotes and paragraphs in this article have been adapted from Has God Failed You: Finding Faith When You’re Not Even Sure God Is Real, which in turn were taken from my 2011 debate with Prof. Bart Ehrman addressing the subject, “Does the Bible Provide an Adequate Answer to the Problem of Suffering?”