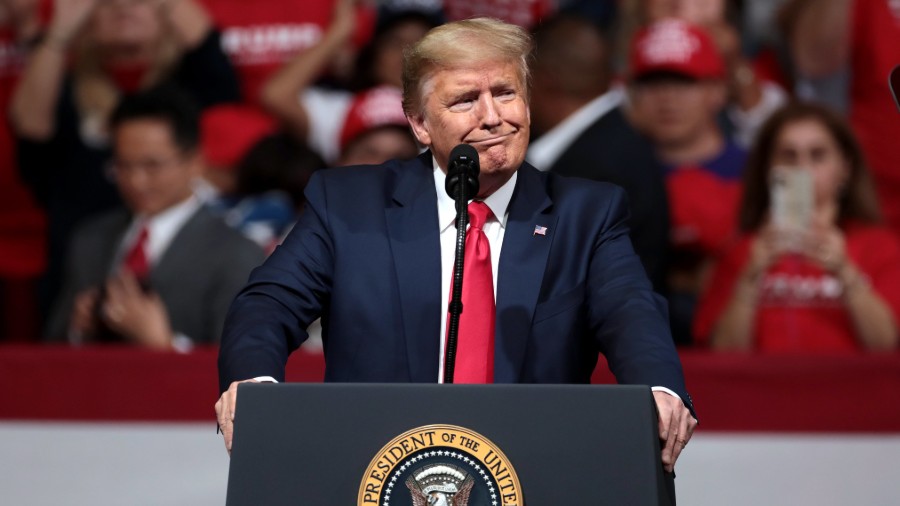 Drawing thousands of people in the midst of virus fears and protest concerns is a dud? Setting an all-time Saturday night viewing audience on Fox is a dud? File photo: President Trump speaks at rally in Phoenix, Arizona, February 19, 2020.

I rarely use the term “fake news” in my writing. In fact, out of the nearly 2,000 op-ed pieces I have written, I can only find a couple of times I used it in the title of one of my articles.

One reason I’m hesitant to use the term is because it is so overused. Everything these days is “fake news.” Another reason I don’t use the term a lot is that it is often our convenient way of dismissing a story we don’t like. “That’s just fake news!” we exclaim.

Yet fake news really does exist. And once it circulates online, it becomes canonized, fixed in the popular mind of the day as if irrefutable truth.

Yet it’s becoming more and more difficult to separate truth from fiction when following the news.

You’ll read a juicy headline, promising some bombshell information, only to read the article and say, “That’s it?”

You’ll see the sensational title of a video only to watch the video and ask, “Where was the shock and awe?”

You’ll see a chyron (a TV news banner) running across the screen, but it doesn’t match the content you are hearing.

Worse still, you’ll see that the headline or title or chyron is merely an interpretation of the events, someone else’s spin on a quote. The facts are obscured by the opining. Yet you think you’re getting the facts.

And how often do we fail even to read the full article (or watch the whole video or TV report), let alone research the information for ourselves?

Trump’s Rally Wasn’t Packed Out, But Had Record-Breaking Views on Fox News

I was struck by this phenomenon in recent days when reading reports about President Trump’s rally in Tulsa this past Saturday. (For the Trump-lovers or Trump-haters, here’s a spoiler alert: This is not a politically partisan article. This is not pro-Trump or anti-Trump. It is pro-truth.)

Before the rally, there were reports of as many as one million people registering for the event. There were plans for Trump to address an overflow crowd outside the arena. And it was fully expected that the arena itself would be packed.

None of that happened. Instead, according to the local fire department, 6,200 turned out for the rally, leaving many empty seats in the building.

Others disputed those numbers, claiming a substantially larger crowd was present, based on the capacity of the arena and the number of empty seats.

In any event, on Fox News alone, nearly 8 million tuned in to watch, while online streaming services brought in as many as four million more. The Hill even reported that, “President Trump’s rally in Tulsa, Okla., generated the largest Saturday audience in Fox News Channel’s 24-year history in delivering 7.7 million viewers, according to the early Nielsen data.” That is quite an accomplishment.

And, given the ongoing concerns about COVID-19 and the threat of protests outside the rally, the event was hardly a flop. (The White House denied reports that Trump was “furious” over the turnout.)

As for Trump’s performance during the rally, he seemed quite energized, as did his base. (Again, I’m just reporting the facts here, not making a political statement. You may have loved or hated his speech. That’s not the issue.)

Media Calls Trump’s Rally “Disastrous” — a “Dud” and a “Debacle”

And how did some of the media describe the rally?

Writing for CNN, Chris Cillizza offered “6 excuses for why the Trump Tulsa rally was such a dud.”

A dud? Really? Drawing thousands of people in the midst of virus fears and violent protest concerns is a dud? Setting an all-time Saturday night viewing audience on Fox is a dud?

Worse still was the reporting by the Daily Mail for which “dud” was not a sufficiently derogatory description. Instead, one headline announced, “Two of Donald Trump’s campaign staff who were at disastrous Tulsa rally test positive for coronavirus — but officials say they were ‘wearing masks’” (my emphasis).

Yes, the rally was disastrous! (If you read the actual article, it barely mentions the rally. When it does, the description is much less bombastic.) Now this is a matter of fact. It is codified and canonized.

For Politico, the rally was not merely a “dud” or “disastrous.” Instead, it was a “debacle.”

To rally that many people in such difficult times is hardly a dud, a disaster, or a debacle.

To quote directly, “Inside Trump’s Oklahoma debacle. The rally was meant to be a turning point in Trump’s fortunes and efforts to take on Biden. Instead, Trump was furious and his campaign is reeling.”

So, Trump finally gets his full house — meaning, on his second rally since the shutdown, just four days after the Tulsa rally. That is the meaning of “finally”?

Certainly, Trump expected a packed house in Tulsa and didn’t get it. That would certainly irk him. And he couldn’t have been happy about reports of Chinese collusion in boosting the number of reservations made for the Tulsa event, whether true or not.

But, to repeat, to rally that many people in such difficult times is hardly a dud, a disaster, or a debacle. And to draw another 12 million viewers between TV and internet, including record-setting TV numbers, is even less a dud, a disaster, or a debacle. (Bear in mind that other TV networks did not air the rally, so the viewing numbers could have been much higher still.)

News Media Consumer Beware: We Must Do Our Own Homework

But the story has been told and the reporting has been done. The media has rendered its judgment, and opinion, to the point of fiction, has become fact. Let the viewer/reader beware.

Does the rightwing media do this as well? Yes, the sword cuts both ways.

All the more, then, do we need to do our homework and form our opinions for ourselves. We cannot rely on the media to do it for us.