When Can We Expect Awakening and Revival? 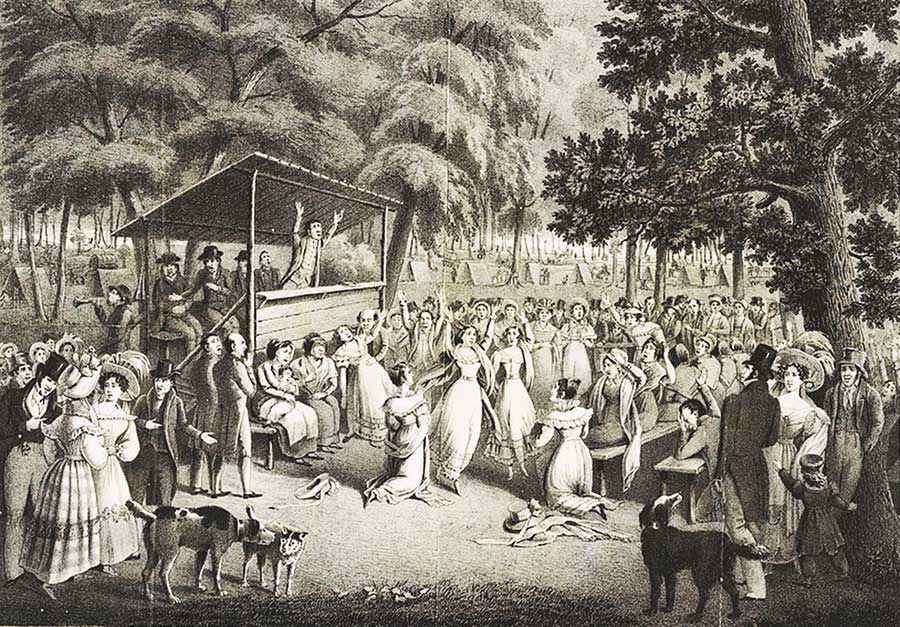 Camp-meeting — Drawn on stone by H. Bridport. Date circa 1829

ALAN EASON —  Charles G. Finney was a great American preacher and revivalist who helped lead the Second Great Awakening and the fight to abolish slavery in the United States. He also wrote about how we know when to expect a revival.

Many modern Christians have been earnestly praying for awakening and revival. Most of us know that great awakenings dramatically changed the course of both the United States and England during the past three centuries. It is not taught much in secular history classes, but when you study the societal effects of the great preachers of the mid-to-late 1700’s in England and Wales and the First and Second Great Awakenings in America, the effects are astounding. Both countries were turned around spiritually and culturally. The societal values of the entire world were dramatically influenced, from the abolition of slavery (led by Christians in England) to the definition of “Human Rights” and the protection of individual freedom of conscience and religion in America.

But the big question for years now has been: “When can we expect another awakening?”

One of my favorite leaders of the Second Great Awakening in the United States was Charles G. Finney.

Here is a quote from Finney”s item #3 in his second lecture on “Revivals in Religion”entitled “When a Revival is to be Expected.”

[Expect a revival] When the wickedness of the wicked grieves and humbles and distresses Christians.

Sometimes Christians do not seem to mind any thing about the wickedness around them. Or if they talk about it, it is in a cold, and callous, and unfeeling way, as if they despaired of a reformation: they are disposed to scold at sinners — not to feel the compassion of the Son of God for them. But sometimes the conduct of the wicked drives Christians to prayer, and breaks them down, and makes them sorrowful and tender-hearted, so that they can weep day and night, and instead of scolding and reproaching them, they pray earnestly for them. Then you may expect a revival.

Indeed this is a revival begun already. Sometimes the wicked will get up an opposition to religion. And when this drives Christians to their knees in prayer to God, with strong crying and tears, you may be certain there is going to be a revival. The prevalence of wickedness is no evidence at all that there is not going to be a revival. That is often God’s time to work. When the enemy cometh in like a flood, the Spirit of the Lord lifts up a standard against him. Often the first indication of a revival, is the devil’s getting up something new in opposition. It will invariably have one of two effects. It will either drive Christians to God, or it will drive them farther away from God, to some carnal policy or other that will only make things worse.

Frequently the most outrageous wickedness of the ungodly is followed by a revival. If Christians are made to feel that they have no hope but in God, and if they have sufficient feeling left to care for the honor of God and the salvation of the souls of the impenitent, there will certainly be a revival. Let hell boil over if it will, and spew out as many devils as there are stones in the pavements, if it only drives Christians to God in prayer — they cannot hinder a revival. Let Satan get up a row, and sound his horn as loud as he pleases; if Christians will only be humbled and pray, they shall soon see God’s naked arm in a revival of religion. I have known instances where a revival has broken in upon the ranks of the enemy, almost as suddenly as a clap of thunder, and scattered them — taken the very ringleaders as trophies, and broken up their party in an instant.