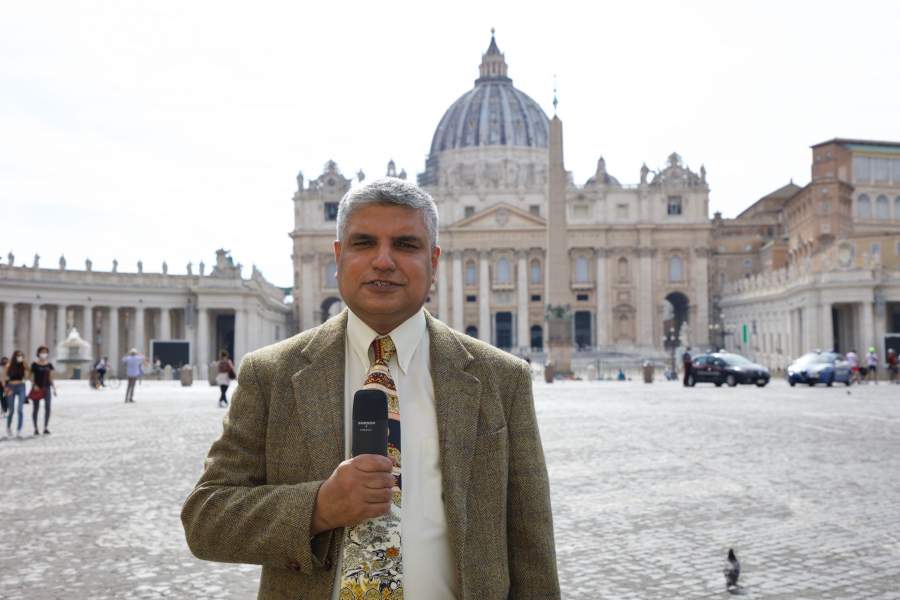 The most journalistically driven, polished, professional reporting on the Catholic church and its worldview comes from Church Militant. That news source, founded and run by laymen, turns a probing eye at church people and doings. It frequently makes enemies. Which means it’s doing its job.

With the Chaplain to the Queen

John Zmirak: Can you please tell Stream readers about yourself — your religious journey, your academic accomplishments, your journalistic work?

Jules Gomes: After two decades as an Anglican priest, I swam the Tiber with my bishop — a former Chaplain to the Queen — at the beginning of 2020. My weekly biblical exegesis in preparation for my sermons, my study of the Church Fathers, and a historical re-reading of the Protestant Reformation left me with no option.

I was also shocked by the Babylonian captivity of British evangelicalism to the zeitgeist. Protestantism there was no longer the Church Militant, but the Church Compliant. I experienced a profound hermeneutical fracture.

As a child, I was in love with literature. In the days when professors did not brainwash students with a lesbian post-colonial reading of Milton’s Paradise Lost, I graduated from Bombay University in English literature. We began with Chaucer and Shakespeare and ended with James Joyce and T. S. Eliot.

My love for words led to a love for the Word and I began my scriptural odyssey doing a four-year postgrad degree, a two-year Masters’ degree, and my doctorate from the University of Cambridge in the Hebrew Bible.

God has a sense of humor. My first career was in journalism. As a reporter in Bombay, I exposed the dirty deeds of seven of the world’s biggest pharmaceutical companies — including Pfizer. Years later, I returned to my newspaper for a short stint as sub-editor to pick up skills in copy editing, page-making, and bullying cub reporters!

The Cowardice of Christian Media

As a secular journalist, I spotted the mediocrity and cowardice of the so-called Christian media. So, when I stumbled across Church Militant (they found me!) I was overwhelmed by the high degree of professionalism and fearlessness at every level — word, image, video.

It was all down to one man’s vision — Michael Voris — a secular television reporter and a prodigal who came home to Christ. Voris’ passion was saving souls. It still is our chief goal. But when Voris saw the gangrene in the hierarchy, our apostolate [ministry] adopted the prophetic paradigm set by Amos and the eighth-century prophets. That is, speaking truth to power without fear or favor.

A few days ago I wrote a light-hearted column on why Pope Francis is NOT the big-a Antichrist. What prompted that was Pope Francis’ use of St. Paul to equate traditional Christians with Judaizing apostles in the first century. As a biblical scholar trained at Cambridge University, can you address Francis’ remarks? Do you agree with me that he’s engaging in a kind of Marcionism, aimed at the New Testament rather than the Old?

I got a kick out of your spiel on Pope Francis. Your analysis is devastatingly incisive and outrageously funny. Francis cannot be the Antichrist — because he’s simply too mediocre to fulfill that gargantuan task!

Honestly? Each time Francis quotes, or rather misquotes Scripture, I cringe. Because even when as a trainee pastor in a neo-Pentecostal church, I had at least one preaching mentor telling me: “A text out of context is pretext and can be used to prove anything.”

In the last couple of days, he has distorted Paul’s letter to the Galatians. He compared Catholics who are simply following Church teaching with the Judaizers who wanted to impose circumcision on Gentile Christians. The analogy is fatally flawed.

Any student of Pauline theology will tell you how Paul’s pastoral imperatives in the second part of his epistles are always rooted in his doctrinal indicative in the first part.

Because Francis has no Jewish understanding of the law as Torah and as God’s liberating gift rather than a suffocating restriction, he adopts a quasi-Marcionism towards the Hebrew Bible.

The Wedding at Cana or in Sodom?

Perhaps the front line of the World’s assault on the Church is the issue of active homosexuals in the Church. Pope Francis seems to be doing some strange Kabuki dance on the topic. He permits his deputy to issue a doctrinally correct statement: The Church can’t bless sodomitical unions. But then he ladles fulsome praise on James Martin, SJ. That priest has made it his mission to promote such unions. From your view in Rome on the ground, what’s really happening?

Faithful Catholics are freaked out by his vacillating. The ultra-papalist conservatives cheer when he throws them a few crumbs under the Fratelli Tutti table. For example, letting the Congregation for the Doctrine of the Faith ban same-sex blessing. But before the ink on the document is dry, Francis is patting his homosexualist poodle Fr. James Martin on the head.

There is a method to Bergoglio’s madness. He is playing a game called “suspended terror.” Read Robert Greene’s The 48 Laws of Power. It’s now a bible in the world of management. “Be deliberately unpredictable. Behavior that seems to have no consistency or purpose will keep them off-balance, and they will wear themselves out trying to explain your moves.” There! You have Peronist-Bergoglianism in a thimble. See Greene’s advice:

Don’t just be unpredictable: like Hannibal, create a scene that cannot be read. There will seem to be no method to your madness, no rhyme or reason, no single explanation. If you do this right, you will inspire fear and trembling and the sentries will abandon their posts.

This explains the “feigned madness of Hamlet,” frightening his stepfather Claudius through the mystery of his behavior. The mysterious makes your forces seem larger, your power more terrifying.

You know, I smell that fear on the skin of bishops and cardinals in the Vatican. It’s an Italian-speaking outpost of North Korea. And at press conferences, they offer the obligatory pinch of incense every ten sentences or so to “Papa Francesco.”

The Vatican: HQ of a Globalist NGO

What is it like to represent a doctrinally orthodox, politically conservative media outlet in Pope Francis’ Vatican? How does it feel?

It feels very lonely — like an owl of the waste places — to plagiarize Psalm 102. The English-speaking press corps are largely the CNN-types, pushing the pansexual agenda and women clergy. Some promote the Church of Nice. There are a couple of very good courageous reporters, and I’m blessed by their wisdom and camaraderie.

Otherwise, it feels like covering the HQ of a globalist NGO, with rapid-fire sloganeering on climate alarmism, immigration, redistribution of wealth, inter-faith dialogue, and, more recently, cheerleading for the COVID-19 cult of fear. An Italian epidemiologist I know has even christened it the “Vaxtican.”

Then there is the usual gravy train of speech-givers-for-fat-fees which does its regular rounds. The Jeffrey Sachs/Tony Fauci pro-abortion, LGBT, population control types.

You will, of course, never ever hear an alternative voice — it’s a monophonic cacophony. Funny, they always talk about diversity. You almost never get a straight answer at a press conference. The Holy See Press Office never bothers replying because Francis treats its staff like dirt and recently publicly insulted them.

Jumping On Board the Titanic?

You’ve come home to Catholicism fairly recently. I know quite a few people who were drawn to the Church under Benedict, only to find themselves dealing with Francis. Any buyer’s remorse?

Actually, it was Benedict who drew me back. Many of my Anglican priest friends who are drawn to Catholicism are now considering Orthodoxy because they see the Catholic Church adopting the same suicidal Anglican strategies Bergoglio is pushing. Like synodality — where you vote on doctrine and make it up as you go along.

I don’t have any buyer’s remorse because the Church is the Bride of Christ. The Pope is not the Church. Francis is here today, gone tomorrow. He’ll do a fair bit of damage, but Jesus built his Church on the rock of Peter, and not on the quicksand of a Bergoglian pontificate.

I am also hugely encouraged by the growing number of faithful and fighting Catholics — who are rejecting clericalism and not swallowing the “Father knows it all” mind-numbing Catholicism of yesteryears. We’re a sort of French resistance, blowing up their petrol dumps while keeping one eye open for Churchill’s armada that’s going to come across the Channel. That’s I guess the Second Coming of Christ!

Given the kind of cardinals Francis has appointed, is there any non-miraculous prospect of a faithful Catholic replacing Francis when he finally goes to his rich, rich reward?

No. Unless there’s a miracle. After Pope Gregory the Great imagine a Pope Wilton Gregory! Or Pope Nighty-Night-Baby Tobin! Or Pope Groucho-Harpo-Chico Marx! If Cupich becomes pope, I’ll stock up on Fratelli Tutti in seven languages for bedtime reading.

Will a future faithful pope have to retract or correct much of what Francis did? How must Catholics now re-evaluate their vision of papal authority, in light of what Francis said and did?

I think you say it best in your Politically Incorrect Guide to Catholicism. Ignore the pope when he offers you predictions on the stock market. Pope Francis doesn’t have a degree in medicine. So ignore him when he pontificates on vaccines. The job of a pope is to uphold the apostolic Deposit of Faith. Period. If he departs from Divine Revelation, quote Galatians to him: “Even if an angel were to preach a different gospel, let him be anathema.” Oops, Francis didn’t mention this verse when he used Galatians to spank the Rigidites, did he?

How is the Church faring in your native India during Francis’ reign? You’ve written about this at Church Militant. Please give us a snapshot from your past coverage.

Let me close by being nice to Francis. The poor chap isn’t at all responsible for the Indian Catholic Church going down the proverbial toilet. It’s the so-called spirit of Vatican II.

Waving around documents like Nostra Aetate and Lumen Gentium, Indian bishops and priests have largely declared a moratorium on evangelistic mission. Evangelism is making a Hindu … a better Hindu, they tell me. And, with the Raimon Panikkar nonsense of the “Unknown Christ of Hinduism” (Would we like to be told of the “Unknown Krishna of Catholicism”?), conversion is as dead as a corpse by the Ganges.

The good news is that hundreds of thousands of Hindus, Muslims, Sikhs, Jains, and Buddhists are hearing the gospel and turning to Christ. But it’s the evangelicals and the Pentecostals doing all the evangelism. And as in Latin America, thousands of Catholics have left the Church for evangelical denominations.

The Catholic Church is smoking the weed of dialogue and the hippie priests of the sixties are still muttering their “integral liberation” mantras. Benedict was a rude interruption and he cracked down, for example, on the “Hindu” Masses and the inculturation racket, but he’s gone and now they’ve got the pope of their dreams!