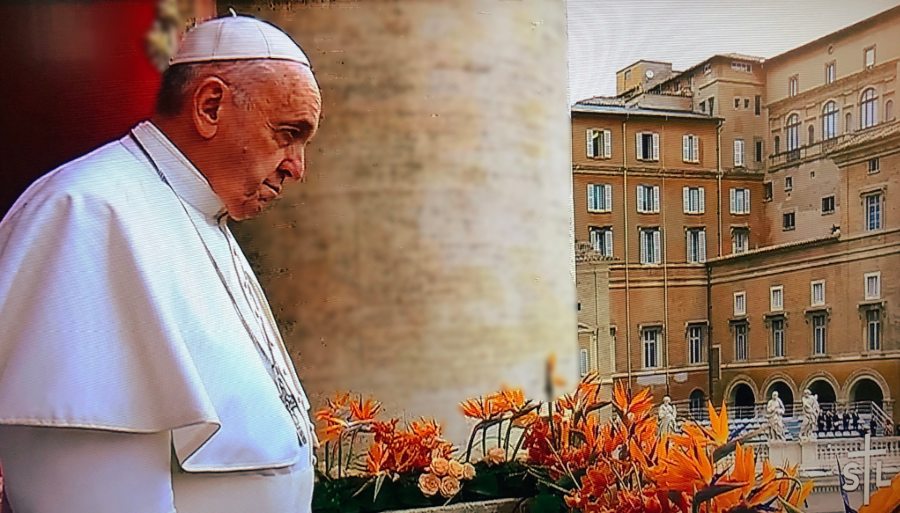 Let me start with a clarification. It’s my answer to the question that gets whispered among faithful Catholics after their fourth or fifth gin and tonic. My answer is still, “No. Pope Francis is not the Antichrist.”

Maybe you’re skeptical. Let me explain. The big-A Antichrist of scripture is supposed to have an IQ above 105. In fact, he’s meant to be brilliant. Charming, wise, and seemingly holy. He’s meant to have the power, if given time, to deceive even the Elect.

Pope Francis doesn’t fool anyone. Nobody who still respects him was ever really a believer in the first place, except perhaps in an idolatrous papal Stalinism straight out of a Jack Chick booklet.

The End of Papal Stalinism

The sooner that superstition is dead, the better. I think God permits Francis’ actions precisely to stop us Catholics from ever again giving undue importance to every word or writing by a pope. Papalism is dead, killed by a pope.

Yes, Catholics will defer to a pope if he ever uses his supreme power to declare something as infallible. That has happened maybe eight times in history. The rest of the time? We’ll judge what he says on its merits. Compare it to Scripture, sacred Tradition, and Natural Law. Then make up our minds for ourselves. Treating every poot in the papal bathtub like a divine revelation? That’s like taking Justice Roberts’ dinner party speeches as new Constitutional law.

The Real Antichrist Won’t Be So Blatant

Read The Dictator Pope to see all the backs Jorge Bergoglio used to slap before stabbing, all the bridges this man burned in his ruthless climb to the top. The real Antichrist won’t have a long, well-known track record of cozying up to dictators. He won’t come to power with the help of the most pro-pedophile, pro-abortion cardinals in the Church. Nor invite the worst of them out on the balcony right after his election to wave at the crowds. He won’t invest Peter’s Pence in kissy-kiss gay biopic bombs about Elton John. He won’t hug unrepentant abortionists in public.

Those Catholics who seemed faithful under John Paul but now parrot Francis’s errors? They’re simply outing themselves as opportunists or zombies. Even Francis’s allies sanitize their hands after shaking his. The gay Jesuits, the Red Chinese, the fat German globalist billionaires stuffing their pieholes with vegan knockwurst … none of them see Francis as more than a useful idiot, a steamroller to crush a speedbump.

The Catholic Marion Barry, or the New Marcion?

Francis is the Marion Barry, the Boris Yeltsin, the Rob Blagojevich you hope your enemies are dumb enough to put in charge. Or the Indian chief the rapacious English settlers want to see take power. They know he’ll sell them his forefathers’ birthright for a jug of rum and some trinkets. The real Antichrist won’t send his deputies to praise Communist regimes at conferences of government organ thieves. Or take billions of dollars in bribes from them that Breitbart can expose. He’ll be clever, and subtle, and smart.

Okay, so I’m not preaching the apocalypse when I suggest that Francis is something else, one of the many lesser, small-a antichrists who’ve emerged over millennia — a toady like King Herod, or a conman like Simon Magus. But more than anyone else in Christian history, Francis resembles the first great heretic in the history of the Church, the wealthy modernizer Marcion:

Marcion declared the “God” of the Hebrew Bible unworthy of Jesus’ “higher” and “purer” ethics. He announced that the Father of whom Jesus spoke was not the entity who’d spoken to Abraham and Moses, but some vastly more elevated God. The “lesser” god of the Jews, Marcion declared, was some well-meaning but bumbling “demiurge.” The true God whom Jesus had come to declare wished to set us free — from the countless demands of the Old Testament, from its god, and from the Jews.

Jesus wasn’t incarnate as both the Yahweh of the Jews and a Jewish carpenter’s stepson. Instead, He was merely a “manifestation” of some higher, cosmic God.

Marcionite Christianity fit perfectly with the philosophic opinions and cultural attitudes of the age. And for a very good reason: it was the product of them. Instead of a full, rich tradition that went back for thousands of years as the revelation of God, the creed of Marcion was the fruit of exquisite plastic surgery, of the kind that would put today’s transgender clinics to shame.

[T]oday we face Marcionism in a new and more virulent form. Progressive Christians seem perfectly happy to offer the Marcionite sex change (snip here, snip there) to the Church’s historic doctrines. They shed most of the Old Testament, especially. It contains those pesky prohibitions of most sexual sins, as well as firm endorsements of national borders, private property, and the “patriarchal” family.

They’ll take their surgical scissors to the New Testament, too, even Christ’s own words. Their private vision of “What a Good God would really mean” is their highest religious authority. They announce their “new gospel” with the hemp rainbow flags they fly. Their hubris escalates daily, replacing their sense of shame.

Every Christian Before 1960 Was a Pharisee

Pope Francis regularly channels the heretic Marcion, but with a twist. See this report from Lifesitenews:

Pope Francis used his general audience this week to denigrate online preachers who are “rigid” and who seek “solutions to the crises of today” in the past, while again choosing to say nothing about the ongoing persecution of Christians and others by the Chinese communist government.

Drawing from St. Paul’s Letter to the Galatians, the Pope seemed to be accusing conservative and traditionalist Catholics of being in league with the Evil One and of being no different from those who sowed discord and mistrust by demanding that the new Christians in Galatia subject themselves to Mosaic Law.

“At General Audience Pope Francis berates ‘preachers, especially through the new means of communication’ who present themselves ‘as true guardians of the truth; strongly affirm that the true Christianity is the one they adhere to, often identified with certain forms of the past,’” noted a Tweet by Catholic Sat.

The Vicar of Christ, or a Knock-Off Imitation Savior?

Marcion claimed that Jesus came to completely negate the Old Testament. Francis pretends that Vatican II negates parts of the New, and key teachings the Church passed on until he came along. Why else would Francis claim that taking literally Jesus’ own teaching on divorce is pharisaical, worthy only of “doctors of the law”? Especially since the position Francis promotes is exactly … that of the Pharisees whom Christ rebuked.

On divorce, capital punishment, and (in practice) on homosexual actions, Francis treats the teaching of the New Testament, as passed on by his predecessors, the way Marcion treated the Old. Perhaps Francis considers himself not the Vicar of Christ but a “second Christ” — a term some incautious enthusiasts applied to St. Francis, whose name (not spirit) this pope appropriated. If Pope Francis can say, in effect, “Jesus told you X, but I say unto you Not-X,” what else is he playing at being but the prophet of a new Covenant, preaching a “new gospel” such as St. Paul warned us against?

But again, the big-A Antichrist will be made of sterner, smarter stuff. Unlike this gas-lighting recycler of discredited leftist cliches, the genuine article might well fool you and me. So remain on your guard.