What If the Nazis Had Really Lost World War II? Part 2: Imagining Such a Timeline 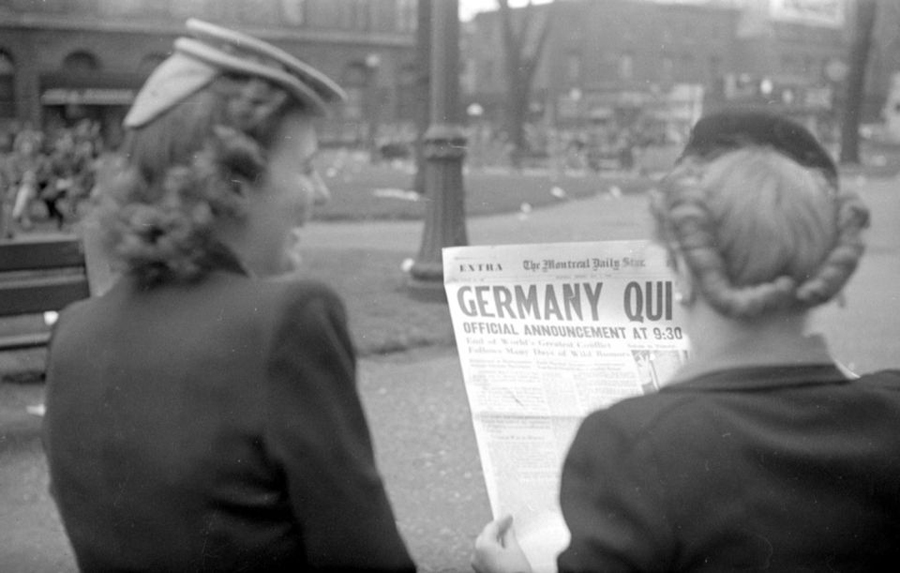 In my last column, Part 1, I mentioned my idea for an alt-history novel, one where the Nazis had really, really lost World War II. Where their deepest beliefs didn’t continue to dominate Western societies. And our elites didn’t quietly march to much the same drummer as the troops that stormed into Warsaw.

Our science wasn’t governed by monstrous, utilitarian cruelty. Our politics didn’t rest on scapegoating, group hatred and vengeance, propaganda and censorship. Because we had renounced, as a civilization, the premises that made the Nazi regime so monstrous.

I don’t have what it takes to be a quality novelist. My old Mac disks are stuffed with the proof of that, in the form of unpublishable narratives I inflicted on agents and friends. So I can’t write the book I’m talking about.

Can You Even Picture It?

But one thing does lie within my powers: To point up how compromised we all are, even many Christians, by our tacit, unconscious absorption of the deadly premises that the West still shares with the Nazis — whom it ritually denounces by way of keeping its conscience quiet.

And I think the best way to do that is to lay out some of the world as it would be in my alt-history novel, where the Nazis really lost. Where their worldview didn’t simply go underground, into some Argentina or Paraguay of the mind, to emerge triumphant today. Will you take that journey with me, to my imaginary world?

A World Without Nazi Medical Ethics

We would have repudiated forever the idea that the State exists as an organ of hygiene, to manage the health and uplift the lifestyles of its citizens. Of course, we’d never violate the Nuremburg Principles, and force experimental vaccines on millions of citizens without their free, informed consent. That’s obvious.

We also would never countenance making those vaccines using organs cut out of the living bodies of unborn children, whose hearts were still beating. Nor would we create treatments for illnesses like COVID by using mice “humanized” with hundreds of fetal organs taken from intact, living babies delivered by Caesarean section, in research subsidized (secretly) by the government. That would smack too much to us of the vicious experiments conducted on other vulnerable human groups by the Nazis — who remember, in this scenario, actually lost the war.

Any decent person would be nauseated at the thought of receiving such a treatment. He’d compare it to benefiting from DNA stolen from poor Ann Frank, by a monster like Josef Mengele. Philosophy professors, medical ethicists, evangelical leaders, pastors, and the pope himself would take such a stand.

The Vicar of Christ would point out that early Christians died rather than pretend to worship Caesar. Surely, they should accept the risks of a virus rather than emulating Hitler. Thanks to the Fall, death is part of life. It’s madness to hazard one’s eternal life to cling for a few more years to this one, by indulging in medical cannibalism. That’s what the pope would say. In my fantasy world.

In my world, the handicapped wouldn’t be hunted down and exterminated in the womb. The depressed and the sick couldn’t be pressured by their relatives into asking their doctors to kill them. Because the Nazis had lost the war.

In my timeline, we’d still be too spooked by our memories of Goebbels’ propaganda, and the Nazis’ purge of academia and the media, to allow a small group of huge, oligarchical corporations to control communications — especially in collusion with the State. The idea of censoring, silencing, and rendering citizens unemployable because of their political or religious beliefs would horrify anyone.

We’d remember how the National Socialists took over every labor union, student group, children’s club, literary circle, and other cultural organization. How they scapegoated, bankrupted, looted, and finally jailed all their opponents, just a year or two after winning a close, democratic election. We’d never allow our laws to encourage, foment, and protect such dangerous monopolies of opinion. In a world where they lost the war.

The Protocols of the Elders of Jamestown

In my dream world, you could never get ahead by demonizing members of one racial, religious or ethnic group — no matter that you thought they’d accumulated too much wealth, or wielded too much power. You couldn’t systematically exclude them from jobs, academic slots, advancement, or school curricula with arguments that they wielded too much “privilege.” Conspiracy theories that claimed these ethnic groups controlled the government and the economy, so other groups must unite against them, fueled by vengeance, would be automatically scorned.

If Only the Gestapo Has Guns …

In my timeline, nobody would think of collecting all the guns in any society and handing them to the government. They’d remember that one of the first measures the Nazis undertook was using the Weimar gun laws to disarm all their enemies, especially the Jews. They’d recall the millions of victims of Lenin and Stalin and Mao, who shared just one attribute in common: they’d all been disarmed by their governments first.

People would realize that self-defense against violence, crime, and potential tyrannical government is an attribute of basic human dignity. And they would believe in that dignity, because they’d see human beings as images of God, not flatulence in Charles Darwin’s bathtub. In my fantasy world.

Then You Wake Up

But enough of this. Such a book would be too bizarre, implausible, and unrecognizable to us. It would read like some fruity Utopia, or a children’s paradise invented for some cartoon. I couldn’t make such a world believable for more than a chapter or two. Then people would throw it across the room, cursing the author’s name. (As literally happened when I tried to read James Joyce’s Ulysses.)

Back to reality. No, not every element of Hitler’s worldview survived his cowardly suicide in the bunker. Vicious, exterminationist anti-Semitism retreated, mostly to parts of the Muslim world. Sneering resentment and distrust of Jews remained, but diffused somewhat. Now it’s simply applied to white people in general, which I’m not sure is an improvement.

Western elites still engage in crass, hateful groupthink. But now they direct it openly at their own lower classes, whom they demonize with abandon and pile up with sins, while impoverishing their lives and sneering at their values. Whites who are rich and powerful and wish to remain that way know that they must pretend to be “allies” of the supposedly marginalized. In practice, that means recruiting as their deputies and enforcers people who think exactly like them, with different skin color and hair texture — along with a prosperous potpourri of the sexually eccentric.

At the heart of what didn’t change as a result of World War II, where my father served in Germany under General George Patton, is that triad I laid out in Part 1. The one which Hitler brilliantly weaponized. As moderns unredeemed by a living faith in God, we share with those who swarmed the Nuremberg rallies eerily similar answers to those three critical questions.

We already believe (with de Sade, Marx, and Darwin) that life is merely the outcome of a constant struggle for power, either among individuals and species, or between races and classes. No redemption is possible, so we’ve learned not even to wish for it.

We want to think that we can come out on top of this struggle, meet our own needs, satisfy our appetites, and avoid at all costs suffering — which is meaningless and worthless.

We hope that we can get away with shunting off the suffering, the price for our enjoyment, onto other people and groups. Because there’s nobody up in the sky keeping an account of such things, Who will render Judgment upon us.