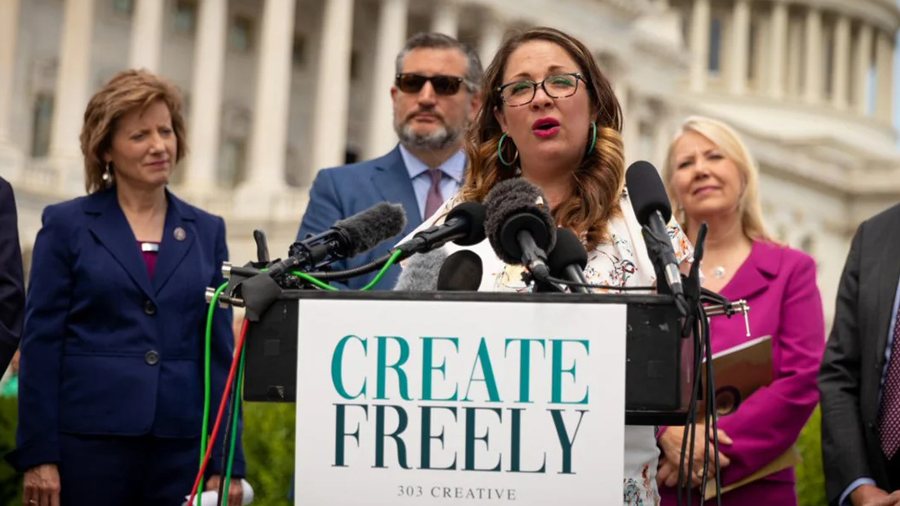 Colorado graphic artist Lorie Smith does not want to be compelled by law to create custom websites for same-sex weddings. Her case will be heard before the Supreme Court in December. Pictured: Smith, owner of 303 Creative LLC, speaks at a news conference in Washington on June 9.

Girgis joined a panel discussion with lawyers Kristen Waggoner and David Cole that turned into a civil debate at the National Archives in Washington, D.C., on Tuesday night discussing the future of the pending free speech case 303 Creative LLC v. Elenis.

Graphic artist Lorie Smith is the owner of 303 Creative near Denver. She filed a lawsuit against a Colorado law that would force her to create custom wedding websites for same-sex nuptials, the same law used to punish Masterpiece Cakeshop owner Jack Phillips. Aubrey Elenis is the director of the Colorado Civil Rights Division and a respondent in the case.

Smith’s case has risen to the Supreme Court, and on Dec. 5, the Alliance Defending Freedom, an international Christian legal aid organization, will argue Smith’s case before the nine justices.

“I want to make it very clear tonight that we support the right of every artist and every American to be able to speak freely, regardless of how they identify, whether they’re Democrat or Republican, whether they’re Muslim, whether atheist,” said Waggoner, president and CEO of the Alliance Defending Freedom and the attorney who will argue Smith’s side before the high court.

The right to “free speech doesn’t come from the government,” Waggoner said. “We’re not lucky to have it. It is a pre-political and inalienable right that we all benefit from.”

Smith is asking for the Supreme Court to allow her to be able to “promote her faith’s view that marriage is between a man and a woman” without fear of retribution if she refuses to design websites promoting same-sex marriage, Waggoner said.

Cole, the national legal director for the American Civil Liberties Union, represented the opposing side in the forum and argued that because Smith has chosen to enter the public marketplace, she is required to serve everyone equally, including same-sex couples.

Rulings from previous cases, such as the landmark Supreme Court case Hurley v. Irish American Gay, Lesbian, and Bisexual Group of Boston, have established that “you cannot compel someone to say or make or do something expressive, carrying a message they reject unless there’s a compelling interest,” Girgis said.

The court ruled in Hurley — an anti-discrimination case on the basis of “sexual orientation discrimination in a public accommodations context” — that there was no compelling interest, he said.

“There is a compelling interest in ensuring every person is treated equally by businesses that are open to the public,” Cole countered.

An audience member later posed a hypothetical question to the lawyers, asking whether, if a heterosexual individual asked a designer to create a website celebrating same-sex marriage and the designer refused based on his or her beliefs about marriage, would that refusal be legal or illegal since the individual making the request is not considered a part of a “protected class.”

Cole answered the question with another hypothetical, contending that if a T-shirt manufacturer were asked to sell a shirt saying “Black Lives Matter” and refused because the manufacturer said it would not sell a shirt with that message to anyone, “that’s not discrimination based on the identity of the customer,” Cole said. “That is message-based discrimination” and is permitted.

Waggoner says Smith is seeking the right to refuse service based on the message of the content, not the identity of the person requesting it.

Cole argues that because Smith is willing to create wedding websites for opposite-sex couples but not same-sex couples, she is discriminating based on identity, which is illegal.

Ultimately, the Supreme Court will decide whether Smith, and other designers like her, can refuse to create websites and other similar content for same-sex weddings.