The Stream's weekly look at the efforts of U.S. troops and military families serving around the world. 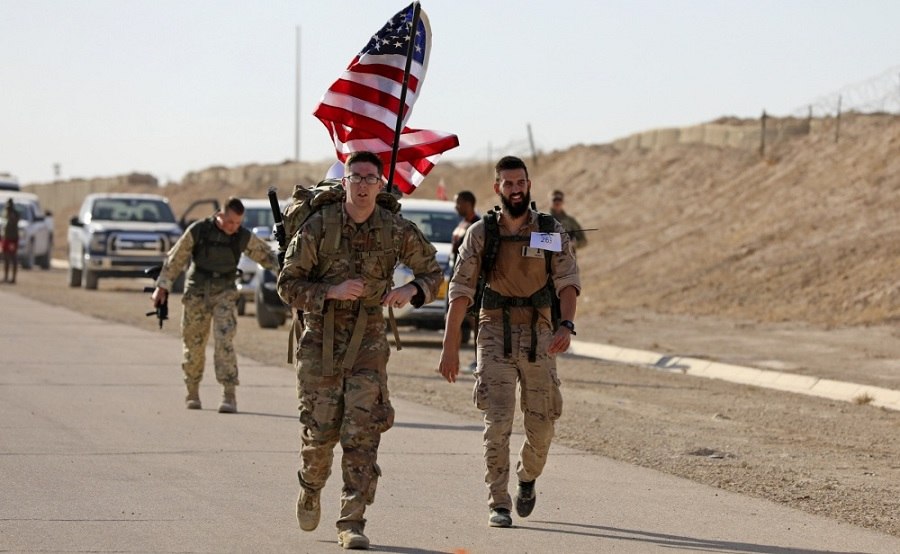 U.S. and coalition forces participate in a foot march held at Al Asad Air Base in Iraq on October 25, 2020.

Thousands of American troops are coming home from war.

President Trump has decided to withdraw about 2,000 service members from Afghanistan and 500 from Iraq, according to the Pentagon. The announcement was made Tuesday by acting Defense Secretary Christopher Miller — himself a veteran of both post-9/11 conflicts.

“In light of these tremendous sacrifices, and with great humility and gratitude to those who came before us, I am formally announcing that we will implement President Trump’s orders to continue our repositioning of forces from those two countries,” Miller said. “This is consistent with our established plans and strategic objectives, supported by the American people, and does not equate to a change in policy or objectives.”

Once the drawdowns are finished on January 15, approximately 2,500 U.S. service members will remain in both Afghanistan and Iraq. Secretary Miller noted that if needed, a significant number of American troops could return.

“If the forces of terror, instability, division and hate begin a deliberate campaign to disrupt our efforts, we stand ready to ally the capabilities required to thwart them,” Miller said.

The grand total of 5,000 troops staying in Afghanistan and Iraq will still face danger, and so will hundreds of U.S. forces in Syria, as The Stream’s John Zmirak noted earlier this week. Please continue to pray for all American warriors deployed overseas, as well as their families here at home.

All five U.S. Army soldiers killed in last week’s tragic helicopter crash on Egypt’s Sinai Peninsula have been officially identified by the Department of Defense.

PICTURED: Five US Army soldiers who were among seven killed in helicopter crash in the Sinai Peninsula https://t.co/A0uDoXy7n8

One French and one Czech soldier also died in the crash, which is said to be an accident but remains under investigation. In addition to the seven soldiers killed, another U.S. service member was injured. Please keep praying for this American hero, who is reportedly recovering in Israel.

“It is with profound sadness that we mourn this tragic loss of life,” Col. David Sentell, commander of Task Force Sinai, said in a statement. “Our thoughts and prayers are with the families, friends and loved ones of our fallen during this most difficult time. They should know that their nation will continue to honor their sacrifice.”

Indeed. We will never forget, nor will we ever stop praying for the loved ones of these fallen heroes.

A tenth American service member has died during the military’s ongoing war on coronavirus.

U.S. Army Reserve Sgt. 1st Class Calvin Ogletree III died of COVID-19 complications on November 12, according to Military.com. The 45-year-old Iraq war veteran from Lakeland, Florida, leaves behind his mother, sister, and brother. Please join The Stream in praying for them.

According to Pentagon statistics, there have been 69,390 coronavirus cases inside military ranks, with 44,390 recoveries and 793 hospitalizations. As we pray for all troops who are receiving COVID-19 treatment, we also thank each and every U.S. service member on the front lines of this pandemic.

Hundreds of members of the Maryland National Guard are finally back home after spending the past eleven months on an overseas deployment. The brave men and women pictured in this moving photo album were part of Operation Atlantic Resolve, which was launched in 2014 in response to the war in Donbass involving Russia and Ukraine.

Yesterday was a special day for members of the 729th QCSC who were welcomed home after their 11-month deployment in support of #OperationAtlanticResolve.

From the @MDNG, welcome home!