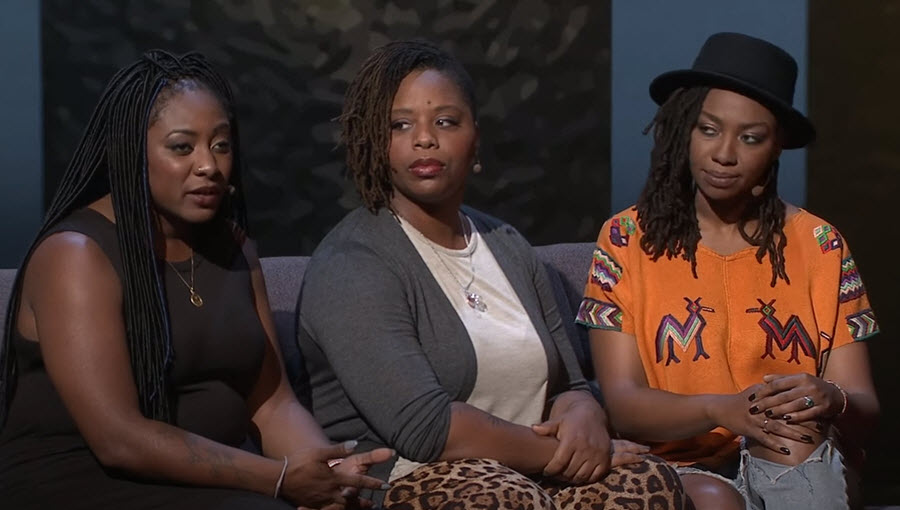 As flames, tear gas, and rifle-fire convulsed American cities, New Yorker reporter Isaac Chotiner sat down with Black Lives Matters co-founder Opal Tometi for an upbeat and uncritical interview. I have twenty less softball-ish questions I’d like to ask Ms. Tometi and her co-founders Patrisse Cullors and Alicia Garza, if they can spare the time.

1. Some say Black Lives Matter adopted that name to emphasize the neglected value of African-Americans, not to disparage anyone else. On the other hand, your Toronto co-founder, Yusra Khogali, wrote: “Whiteness is not humxnness. In fact, white skin is sub-human,” because people who lack sufficient epidermial melanin are defective in both mind and body. Which is it?

2. Thousands of people have been injured in riots over the past two weeks, including hundreds of police officers. Do the lives of black police officers like David Dorn and Patrick Underwood, who were killed, matter? How about the bodies of those injured of all races?

3. Ms. Cullors, according to ABC, you said you are “absolutely and always pushing peace.” That sounds encouraging. But you blame the police entirely for “escalating” the violence, and say nothing about numerous attacks not only on the police, but on private citizens, many of whom have died, been injured, or lost their businesses, over the past weeks. What do you say to those who are, in fact, manifestly using violence within the movement you help lead?

4. For Christian black leaders like Martin Luther King, all human lives mattered because we were made in the image of God, or because Christ died for us. As an “atheist or non-denominational” movement, as one of you put it, on what fundamental principal is the value of at least some human lives based?

5. Having subbed in numerous public school classrooms, I have found that the broad contributions of African Americans to our society are strongly and rightly emphasized. What major politicians, sports figures, CEOs or other figures in American society have said that black lives don’t matter? What reputable poll shows that a significant percentage of Americans deny that value?

6. In the case that brought Black Lives Matters into prominence, Michael Brown assaulted Missouri police officer Darren Wilson and attempted to wrest his gun away, as both a biracial grand jury and the Department of Justice under Barack Obama determined. Do you still maintain that Brown raised his hands and said “Don’t shoot?” despite the mounds of evidence they considered? On what grounds do you reject their conclusions?

7. The term “Ferguson Effect” came to describe and explain a sudden increase in murder rates following riots in that city. Murder rates had been dropping for decades, then suddenly began to spike immediately after those events. Did those deaths trouble you, or tempt you to change your narrative focusing exclusively on deaths caused by police?

8. Heather MacDonald argues that “No government policy in the past quarter century has done more for urban reclamation than proactive policing.” This, she claims, was largely responsible for the remarkable drop in murder in New York City and in cities around the country. She argues that as left-wing politicians dismantled “broken window” and other policies, and police have been reined in, America’s murder rate began to soar. The black Harvard economist Roland Fryer has confirmed the link between shaming of the police and a rise in crime rates. Is none of you worried what crop in pain and destruction of lives (of every color) the policies you advocate may be sowing?

9. Chicago just set a 60-year record for murders in a single day, including high school and college students and working-class “stiffs.” The last weekend in May, already, at least 92 people were shot and 27 died. The police were busy manning your protests:

“On Saturday and particularly Sunday, I heard people saying all over, ‘Hey, there’s no police anywhere, police ain’t doing nothing,'” Rev. Michael Pfleger, who pastors St. Sabina Church in Auburn Gresham said. “I sat and watched a store looted for over an hour,” he added. “No police came. I got in my car and drove around to some other places getting looted [and] didn’t see police anywhere,” Pfleger said.

Does not even this shake you from your conviction that the police are the biggest problem in the inner city?

10. Some six thousand blacks are killed by other blacks per year in the United States. Thousands of whites also kill whites. By contrast, nine unarmed African-Americans are known to have been killed by police last year, one by accident. Why do those few black lives seem to matter so much more in your eyes than these other thousands?

11. Would the deaths of these unnoted, untweeted, little-mourned young black men (mostly) matter more if they had been killed by white police officers?

12. Do you not recognize the link which many have pointed out, between the breakdown of American families, especially in the inner city, and the rise of violent crime?

14. Ms. Tometi, you say that instead of more police, you’d like New York to have more social workers, mental health professionals, and educators. Bill De Blasio says he will cut police funding to do just that. BLM also demands contrition from the police for past errors. The policies of Governor Cuomo and Mayor De Blasio have already been blamed in part for tens of thousands of deaths of Covid-19 in New York and beyond, yet neither man seems to have expressed much contrition. If the policies you demand also result in more not fewer black and other deaths, will you publicly take the knee before the families of those who die?

15. Can you explain why a European-American who has never harmed anyone because of his or her race, and who works and even marries happily across racial divides, feel guilty? Haven’t all our ancestors done both good and bad things? Isn’t guilt individual in our society, or has that changed?

16. You criticize what you regard as excessive spending on police. Republicans like Scott Walker in Wisconsin have long criticized public sector unions. Camden, New Jersey managed to put more police officers on the beat at the same price, bringing crime down and creating greater rapport in the community, by working around police unions. Do you think this conservative idea might work in other public sectors as well?

17. 7-Sigma Inc has announced that after their factory was destroyed in Minneapolis, they will be moving out of the city with dozens of jobs. No doubt many more will follow. What do you say to the people who are losing their jobs?

18. Even while noting that cities around America are ‘burning,” Black Lives Matter is encouraging people to sign a petition that states: “We call for a national defunding of police. We demand investment in our communities and the resources to ensure Black people not only survive, but thrive.”

Doesn’t all the evidence, including the evidence of our eyes, show that aside from criminals who take tens of thousands of lives in the African-American community a year, conventional businesses are unwilling to invest in neighborhoods that are not kept secure? Haven’t the last two weeks alone amply proven that point?

19. Great African-American leaders — Frederick Douglas, Booker T. Washington, Martin Luther King, even Malcolm X and Candace Owens — have seen part of their calling as the prophetic office of raising the moral condition of their people. Why do you, by contrast, speak so little about the responsibilities of black Americans?

20. Is not a tone of outrage directed entirely at the “Other” both patronizing and dangerous?

David Marshall holds a bachelor’s degree in the Russian and Chinese Languages and Marxism, a master’s degree in Chinese Religions, and a doctoral degree in Christian Thought and Chinese Tradition. His most recent book is Jesus is No Myth: The Fingerprints of God on the Gospels.