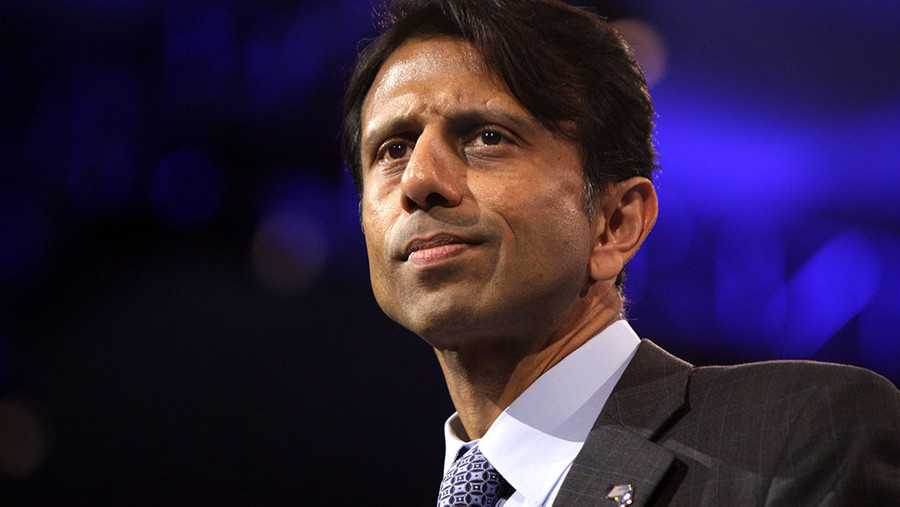 Back in September of 2015 — ah, those wonderful days, when someone might still merrily laugh like a gin-soaked Daisy Buchanan if you told them Donald Trump was a presidential candidate to be reckoned with — Louisiana Gov. Bobby Jindal put his foot down. Donald Trump, he told an audience at the National Press Club, was “dangerous,” unhinged, and completely unqualified for the White House.

“The reality of Donald Trump is absurd. He’s a non-serious carnival act,” Jindal, still in the midst of his quixotic presidential campaign, told the crowd. “It’s silly to argue policy with this guy. He doesn’t know anything about it, he has no idea what he is talking about, he makes it all up on the fly.”

Trump, Jindal continued, was “an unserious and unstable narcissist,” a fickle “hot head” unfit to have “his fingers on the nuclear codes,” and a man who “could destroy America’s chance to be great again.”

Sounds rather decisive, does it not? Fast-forward to this week, after Trump’s resounding win in Indiana and his presumptive coronation as the GOP’s nominee. Longtime Trump cheerleader Sean Hannity, a Fox News host bedeviled by the GOP’s stubborn yet plucky #NeverTrump movement, asked Jindal the following question: With Trump as the nominee, “do you think it’s possible to unite a dream team to run against Hillary and win and save the country from the mess it’s in?”

Hannity asked this, I should note, with a completely straight face. He did not dissolve into giggles, as I surely would have; his eyebrows did not twitch; his TV makeup did not flake off in giant chunks, forming a silent yet poignant cosmetic protest.

This is impressive, given that the candidate who could “save the country from the mess it’s in” — according to Hannity, that’s Trump — had, among other things, literally just accused Ted Cruz’s father of colluding with JFK killer Lee Harvey Oswald, and then acted like this was a totally normal thing to do. Next, Trump declared that people like Ted Cruz’s father shouldn’t be “allowed” to criticize him, perhaps because Trump is not aware of what the First Amendment says, or, if he is, he simply does not care.

Indeed, Trump has explicitly said he will attempt to curtail free speech in America through lawsuits and libel laws. He has mocked the disabled on television. He offers occasional admiration for thuggish Russian ruler Vladimir Putin, and praised the Chinese for their “strength” when crushing the Tiananmen Square protests. Trump has declared that he would force members of the military to commit war crimes, hinted at nationalizing health care, and has said he’ll continue Obama’s ambitious executive order streak.

When it comes to more pedestrian issues — you know, minor trifles like abortion or free trade or even immigration — Trump is a coat of many blurry colors; his stances shift and run and morph depending on the day, often garnished with Trumpian denials of things he has said, recorded in print or on video, weeks or days before. So this week, when asked if Trump could save us all — as an aside, it’s ridiculous to think any politician can save us all, but that’s another column — Jindal opened his mouth and said the following: “Absolutely, Sean.”

It’s been fascinating to watch the GOP establishment — yes, that GOP establishment, the one both Trump’s fans and the media insisted he was fighting all along — breezily sidle up to the presumptive nominee like overconfident pigeons awaiting a stray cracker crumb or pretzel chunk. In his Indiana victory speech, even Trump seemed a bit incredulous at the sudden quisling eruption.

And so we have Reince Priebus, whose entire job depends on the continued existence of the clown car pileup that is the GOP, calling for “unity” behind Donald Trump. We have John Boehner, Trump’s golf and “texting buddy,” subtly cheering him on. We have Newt Gingrich, who appears to be angling for a job in the Trump administration, maybe as vice president. We have fence-straddlers like New Hampshire Sen. Kelly Ayotte, who claims she’ll “support” but not “endorse” Trump, a hilarious position I’m sure will be all the rage in the coming months.

But hey, why not? Washington, D.C., is the ultimate company town, filled with people whose careers and livelihoods depend upon taking your money and preserving the status quo. This includes the current Republican apparatus, which does not care about principles and certainly does not care about you.

No kidding. Trump, throughout his campaign, has concurred: Government is a lever of power to be used, not limited, and “everything is negotiable.” Translation: Prepare for business as usual in Washington, headed by a statist who repeatedly donated to Hillary Clinton. Sorry, GOP. Even if you slap your label on it, it’s still the political version of a fire ant sandwich. I think I’ll pass.

This article originally appeared at RealClear Politics May 5, 2016 and is reprinted with permission.