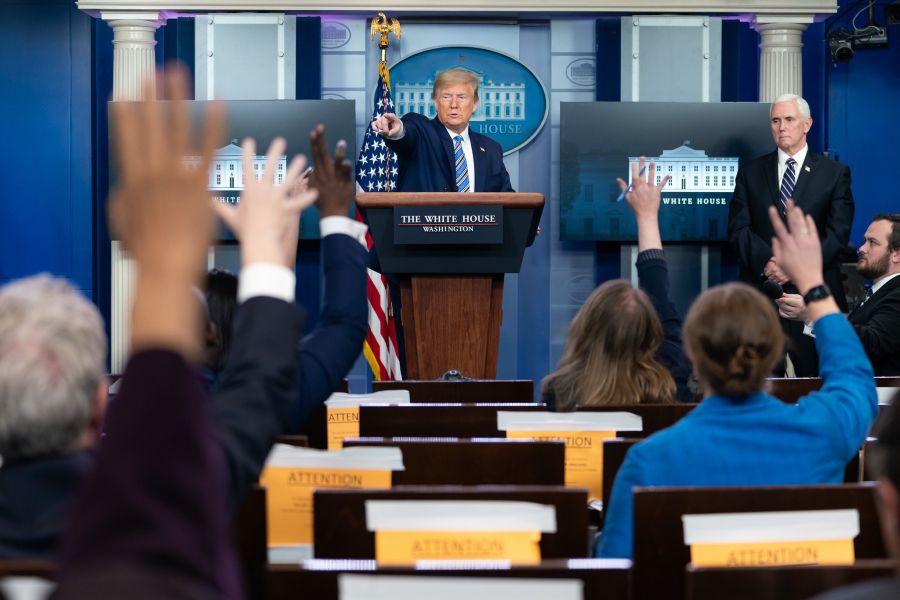 The left’s position on the nation’s proper response to the pandemic, though shrouded in the language of compassion, is incoherent and morally repugnant virtue signaling.

Since this calamity began, many national Democratic leaders, the left-wing media and various never-Trumpers have been more interested in smearing President Donald Trump — no change there — than helping to solve the myriad problems caused by the coronavirus.

They Can’t Have It Both Ways

They wanted it both ways. President Trump was doing too much, and he wasn’t doing enough. Before the outbreak, numerous Democrats were downplaying the virus and condemning Trump as a racist for his China and Europe travel bans. Later they blamed Trump for not taking the virus seriously, when in fact, they were taking it less seriously than he was. But being a progressive means never having to say you’re sorry — and that yesterday’s inconsistent positions are deemed wiped from our collective memory.

From the beginning, Trump and Vice President Mike Pence, along with their medical team, were conducting daily press briefings to inform an anxious nation about the virus and the federal and state governments’ efforts to slow the spread, organizing the distribution of medical equipment to hotspots and pushing legislation to provide relief for individuals and businesses devastated by the outbreak.

The media used those briefings to humiliate Trump rather than illicit facts to inform viewers. For example, New York Magazine’s Olivia Nuzzi asked Trump, “If an American President loses more Americans over the course of six weeks than died in the entirety of the Vietnam War, does he deserve to be reelected?”

Editorial after editorial excoriated Trump for every imaginable sin and certainly every death — while exempting Democratic governors from any accountability for wildly disproportionate cases and deaths in their states. They view everything through a partisan prism, and no crisis is too severe to be exploited for political gain.

Trump, they said, was only interested in manipulating the crisis to enhance his reelection efforts. He jumped the gun in expressing his hope to reopen our economy on Easter. He wasn’t listening to the medical experts. He didn’t care about Americans dying. He was practicing medicine without a license.

Unfortunately for these critics, President Trump was deferring to the medical experts, who repeatedly denied that he was ignoring them.

Considering themselves the sole exemplars of compassion, progressives insist that their views are the only morally acceptable ones, that all who oppose them are immoral and that so long as they have “good” intentions, neither their motives nor their policies can be questioned  — even if they are inconsistent or cause major harm.

Democratic leaders get away with indefensible, one-dimensional thinking, free from scrutiny by an equally one-dimensional media. Their statements are often childishly shallow — and yet no one challenges them.

Take putative Democratic presidential nominee Joe Biden, who tweeted Wednesday evening, “I’ve said it before, and I’ll say it again: No one is expendable. No life is worth losing to add one more point to the Dow.”

While this may strike unthinking people as a compassionate declaration, it is a cheap shot at Trump, other leaders trying to facilitate the reopening of our economy and Americans yearning to be free again — and to return to work. Biden is simply expressing his party’s position: You must choose between those at risk from the virus and reopening the economy. There are no competing interests to balance. Your concern for those unemployed, devastated, isolated, depressed and with other medical problems that are ignored because of the virus is illegitimate.

What’s particularly offensive is Biden’s reducing our concern for those financially devastated to a class-warfare soundbite (“to add one more point to the Dow”) — as if having a heart for the unemployed is promoting the rich. That doesn’t even make sense, but it doesn’t have to as long as it serves the narrative that Republicans are heartless.

Similarly, the never-Trump group The Lincoln Project produced an ad called “Mourning in America” in which Trump is blamed not just for the Americans who died because he “ignored” the virus but for the economic devastation it caused. That’s convenient. These faux conservatives have absorbed the ideas and tactics of their progressive soulmates  — virtue signaling, the shameless advocacy of mutually contradictory positions and consuming hatred for Donald J. Trump.

You know that Trump haters from both sides of the aisle have lost any semblance of fairness when their biases compel them to direct their energies toward destroying Trump rather than seeking solutions for our common problems.

We should all be working together to reopen the economy while trying to prevent new flare-ups, which happens to be precisely what President Trump and his task force are doing.

Talk is cheap, and finger-pointing is easy, but real-world problems sometimes don’t lend themselves to easy fixes. There are no perfect solutions here — there is no way to avoid death and financial destruction, only to mitigate both.

I trust that reasonable people — hopefully still a majority — will demand accountability from their leaders but not hold them to impossible standards. While people often look to government during times of crisis, we must understand that there’s only so much that government can do and sometimes it can also get in the way. It’s time that state governments show a little faith in the American people and respect their prerogative to return to their lives while still exercising responsible behavior to protect themselves and their neighbors. We will get through this.