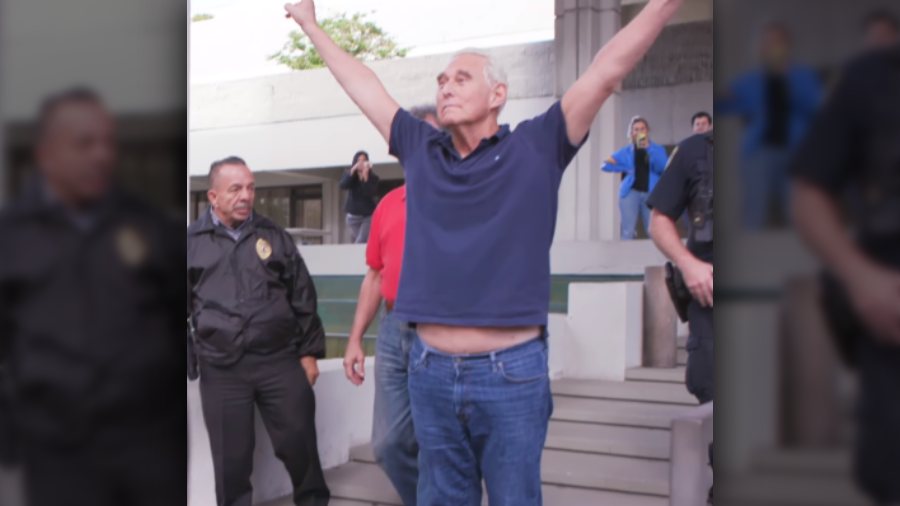 President Trump commuted the prison sentence of Roger Stone Friday night. Not pardoned, mind you. Just commuted the sentence. Stone was set to report to prison this week after being convicted (by a tainted jury) of lying to Congress among other charges brought by Special Counsel Robert Mueller.  His real crime, of course, was being a friend of the president. Anyone telling you otherwise is play acting.

Lying to Congress? It’s the string-pullers involved in the Stone persecution who lied to Congress, lied to FBI agents, lied to federal judges, and lied to the American people for three years.

Sure, “Robert Mueller” has written an op-ed in the Washington Post defending the persecution of Stone. I put Mueller in quotes because we saw Mueller testify last summer. He could barely tell which side of the Mueller Report was up, which was down. He couldn’t tell you Roger Stone from the Rolling Stones. (Doubt me? Robert Mueller didn’t know who Fusion GPS was, the outfit that created for Hillary Clinton’s campaign the Trump-Russia narrative used by the FBI and media against Trump. That’s like testifying about COVID-19 and not knowing what the Wuhan Lab is.

So it’s not Robert Mueller, but Mueller goons defending themselves in the op-ed. The same Mueller Special Counsel goons who alerted CNN and stormed Stone’s house with SWAT teams in a pre-dawn raid that had enough firepower to take a small country. Certainly more firepower than has been used against any of the cop killers busted during the BLM/Antifa riots. All to handcuff and perp walk a 68-year-old first time offender for a white collar process crime. Ghislaine Maxwell could traffic little girls for decades and she got a weekend at a spa compared to Stone.

These are the same goons who falsified documents about Carter Page. Remember? A DOJ lawyer criminally edited an email about Page being a CIA asset to say he was Russian spy. They lied about an American citizen serving his country, insisting he was a traitor in order to spy on Donald Trump’s campaign.

These are the same goons who were so dishonest, so corrupt, so dripping with venom for Trump, that a DOJ investigation into Mueller (and Obama’s FBI and DOJ)’s persecution of Lt. Gen. Michael Flynn demanded the case against Flynn be dropped. Even more proof of Flynn being framed emerging last week. John Solomon reports, “Months before Michael Flynn was charged with lying to agents, the FBI told the Justice Department the Trump national security adviser was ‘very open and forthcoming’ in his interview and believed he was telling the truth about his contacts with Russia.” These notes exonerating Flynn were not given to his lawyers. Remind me again, who again are the criminals?

I include in this list of goons, the utterly contemptible Rep. Adam Schiff. He spent three years lying to every camera within 10 miles of Capitol Hill that Trump was a Russian spy. A traitor. He said he had seen the evidence, by golly! Actually, Schiff had seen the proof of Trump’s innocence. Yet even yesterday, he was on the Sunday morning talk shows, saying anyone who believes in “rule of law in this country is nauseated” by Stone’s sentence being commuted.

This is the Adam Schiff who lied to Congress when he read a false version of Trump’s call to Ukraine’s president. He also lied about not knowing the whistleblower. Unfortunately, a congressman lying to Congress isn’t a crime. Which is a crime. Or at least a crying shame.

There should be no Stone conviction because there was never any basis for the Mueller Special Counsel. Please, my friends, have this tattooed on your hearts: The FBI and DOJ knew beyond a shadow of a doubt before the Special Counsel was named that there was zero, none, nada, zilch evidence of any collusion between Russia and Trump or any of his associates. They also knew that all the allegations against Trump were part of an effort to sabotage him paid for by Hillary Clinton. The naming of the Special Counsel was an extension of the seditious conspiracy designed to undermine and overthrow the President of the United States.

Dear Mr. Durham, to hold off indicting figures who would corroborate Biden’s role in the conspiracy is to interfere in the election.

Remember former Deputy Attorney General Rob Rosenstein? He named Mueller Special Counsel after fired FBI Director James Comey leaked official — if inaccurate — documents in order to force the naming of a Special Counsel. More crucially, Rosenstein did so after he and former FBI deputy director Andrew McCabe debated other ways to get rid of Trump after Trump fired Comey. Remember the talk about evoking the 25th Amendment? Wearing a wire into the Oval Office to entrap the President?

Fruit of the poisoned tree.

Or is it a poisoned grove?

Go back to Lt. Flynn. He was cleared by lower level FBI agents of any Russian collusion by January 4, 2017. However, Comey reversed the decision to close. The next day he’s at the White House meeting with Obama, Biden, John Brennan, James Clapper and Susan Rice figuring out ways to take down Flynn and Trump using the Russia conspiracy hoax.  It was at that meeting President Obama told Comey, Brennan and the rest to put “the right people on it.” You know, the loyal foot soldiers like Peter Strzok willing to carry out the orders of the mob boss, no matter how bloody.

Meanwhile, Vice President Biden suggested trying the Logan Act on Flynn. A law from the late 18th century that has never been successfully used to convict anybody in the history of the United States.

As Attorney General William Barr says, what was done to Trump was a “grave injustice, unprecedented in American history.”

Which Gets to John Durham

Which gets us to U.S. Attorney John Durham.

Durham is investigating not only the corrupt originals of the Trump-Russian investigation, but also the seditious efforts of the Obama team to sabotage Trump after his election. Yet, Fox News is reporting Durham might “punt” on indictments so as to not be seen as influencing the 2020 election.

With all due respect to the longtime prosecutor, that’s utter nonsense. FBI documents prove Joe Biden was a ringleader in the effort to frame Lt. Gen. Flynn. NSA documents also show Biden was the last person to unmask the war hero. Biden openly lied when he said he had no knowledge of the Flynn prosecution. He even lied when he backtracked to say he had no involvement.

Dear Mr. Durham, to hold off indicting figures who would corroborate Biden’s role in the conspiracy is to interfere in the election.

And if Joe Biden is elected, without there being any justice coming to Obama, Biden, Brennan, Comey and the rest, then, my friends, the coup d’etat against the United States succeeded. The seditious sabotage worked. Throw in the socialist policies of AOC and the Marxist violence of Antifa and BLM and you’ve got a third world country.

And every Trump supporter can expect forces coming after them in the dark of night as they did Roger Stone. And CNN will be happy to cover it.