This is an unprecedented, historic and special season for Christians as we rally around an administration that is so zealously honoring of God. 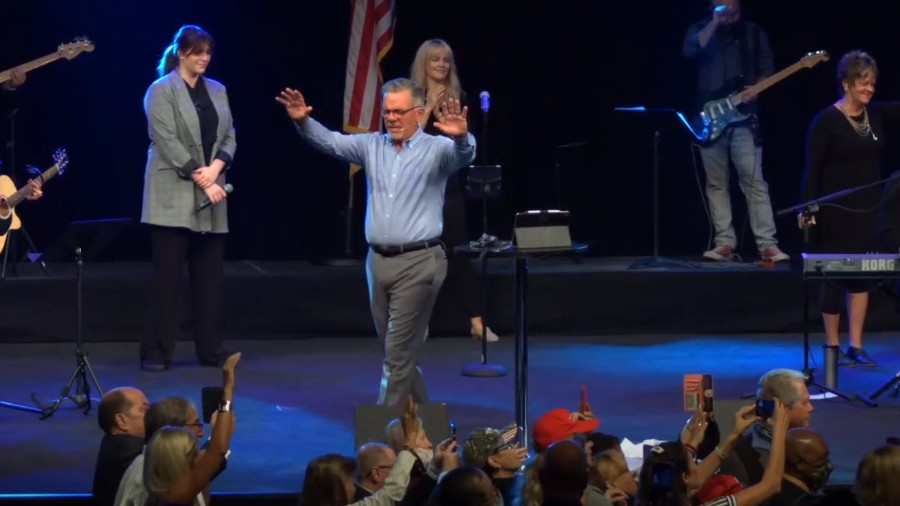 I was deeply moved as I watched President Trump along with his team including White House Press Secretary Kayleigh McEnany engaging with passion in a vibrant, Spirit-filled, prophetic church.

Deeply moved? No, that’s woefully understated. The Spirit of God was burning and blowing through me as I watched. There was a tremble within that suddenly activated as I watched our President and those who surround him in the midst of a cyclone of Holy Spirit activity in Las Vegas. Tears filled my eyes.

“This is your third time here, that means you’re a church member. I don’t care what anybody says. I love my president,” Pastor Marc Goulet said.

President Trump, encouraging and exhorting the pastor and staff, declared that he’ll be back to the International Church of Las Vegas many times.

Not Voting for President Trump?

I know many are already smirking and arguing that this was nothing more than an attention-grab. A photo-op.

First of all, I don’t care, and I’ll tell you why in a moment.

Secondly, if this was your reaction, and you consider yourself a true disciple of Jesus, you have no option but to repent.

As Believers we are to make judgment on others when done according to Scripture. What is inappropriate is a judgment of motive. Clearly, we are mandated to judge fruit. We are to carefully and lovingly analyze situations God brings before us.

“Or do you not know that the saints will judge the world? And if the world is to be judged by you, are you incompetent to try trivial cases? Do you not know that we are to judge angels? How much more, then, matters pertaining to this life!” (1 Corinthians 6:2–3, ESV)

However, we don’t have the license to judge motive. Such a judgment results in gossip, division and accusation. We align ourselves with the enemy. He is the accuser. In fact, Revelation 12:10 reveals he accuses Christians day and night before the Lord.

The gift they are probably referring to is the discernment of spirits, or to “distinguish between spirits.” This is the gift that comes in handy when taking someone through deliverance. We know what spirit is manifesting (or hiding) and we are able to confront it with spiritual intelligence. This gift has nothing to do with judging the motives of someone else. This is God’s job and his alone.

Now, the reason I said that I don’t care whether President Trump’s appearance was merely an opportunity to grab attention (which I don’t believe it was) is simple: this man, in unprecedented fashion for a sitting President, has surrounded himself with authentic, fiery, devoted and uncompromising lovers of Jesus.

A vote for Donald Trump is a vote for Mike Pence, Kayleigh McEnany and the many reputable and anointed pastors and Christian leaders who have remarkable access to him.

Simply, this is the most Spirit-driven administration America has probably ever seen. More striking is the night and day (dark and light?) comparison between such an unashamed embrace of Jesus and the wickedness so many of the liberal left represent.

The Foolishness of Rejecting Donald Trump

I want to encourage you to watch some of the videos from yesterday’s church service. You’ll witness powerful decrees, intercession and exhortation in an atmosphere marked by extreme Holy Spirit activity. I’ve wanted to visit this church for years, and I was thrilled to see our President placing himself and his team in the midst of that whirlwind.

We can all vote for anybody we desire. That’s the American way.

That being said, I’m stunned that any person who names the name of Christ would even consider for a moment allowing the nefarious agenda that the left is aggressively promoting to become rule in our nation.

I’d rather have a flawed yet growing Christian who may be considered a jerk than someone who clearly exhibits rotting (and dangerous) fruit like many of those on the liberal left. There’s no comparison.

Like him or not, Donald Trump is by far the most pro-Christian, pro-church, pro-faith President America has ever had. Stop and think about that. The left? This year most probably represents the most immoral, anti-God political advance in our nation’s history.

Have you witnessed the brilliance of Kayleigh McEnany as she runs her press conferences? As phenomenal as she is on her own merit, I’m sure she would agree with me that her poise, wisdom, boldness and effectiveness in her position is mostly the result of a weighty and unusual anointing of God on her life. She is in her position as a result of Donald Trump authorizing her, commissioning her and entrusting her as the spokesperson of the highest office in the land. If we remove Trump, our nation’s next spokesperson will most certainly be anointed by a very different spirit indeed.

Consider Vice President Mike Pence. Again, like him or not you have to respect his fervent devotion to Jesus. I shudder to even ponder the comparison between this godly man and the current Democratic Vice Presidential candidate.

Donald Trump is a Leader Who has Been Marked By God

I didn’t vote for Donald Trump four years ago. I wrote in Ted Cruz. I absolutely will be voting for him this time around.

I have watched this man transformed before our nation’s eyes. He is a story of redemption, and at age 74, it’s a story that is still being written. He’s much different than he was in 2016. He’ll be even better in the years ahead.

Is he perfect? No way.

Do I hope for the sanctification process to ramp up in his life? Sure.

Do I believe God has anointed him for this hour? Absolutely.

I’m disheartened by professing Christians who are wholesale rejecting President Trump simply because they believe him to be rude, arrogant or a jerk.

Listen closely: I’d rather have a flawed yet growing Christian who may be considered a jerk than someone who clearly exhibits rotting (and dangerous) fruit like many of those on the liberal left. There’s no comparison.

In fact, many misunderstand the traits that mark many leaders, including those in the church. A mega-church pastor once said that he’d never hire a staff member with a strong spiritual gift of mercy. He explained that those people all too often refuse to make the tough and necessary daily decisions because they are too concerned about people’s feelings. That may sound harsh and unloving to you, but the truth is that too many pastors refuse to lead with boldness today. So they compromise the mission to appease a few.

It takes an in-your-face fighter, anointed by God, to lead churches and nations today. Yes, we must be loving in our approach, but we can’t be passive. I believe if more pastors followed Donald Trump’s “You’re fired” approach we’d have healthier churches and we’d be much closer to revival. Again, we can do so with love and tenderness while also being strong and decisive.

When is the last time you heard about a pastor following this mandate in Scripture?

“It is actually reported that there is sexual immorality among you… And you are arrogant! Ought you not rather to mourn? Let him who has done this be removed from among you.” (1 Corinthians 5:1,2 ESV)

Isn’t it interesting that Scripture calls those who are dismissive of sin in the camp arrogant? Today we’d presume someone who expelled them from the church to be unloving, harsh, accusatory and arrogant. Yet, that’s exactly what God demands.

Brash leadership isn’t by default ungodly. Yes, it can be, of course. We simply cannot look at someone who is offensive and deem them to be unrighteous or unfit for leadership. Often times godly leadership demands an offensive, aggressive and unapologetic approach. Donald Trump, while quite imperfect, exemplifies this.

So, just to make my point vividly clear, no I don’t care about his aggressive, brash and sometimes irritating demeanor when he is making the tough, godly decisions for our nation.

Am I saying Donald Trump is ready to lead a church? No. He’s not. Yet, with refining he would make a modern day apostle unlike the world has ever seen. For now, I do believe, as a man in progress, even with all of his rough edges, he is clearly the right choice for the next four years.