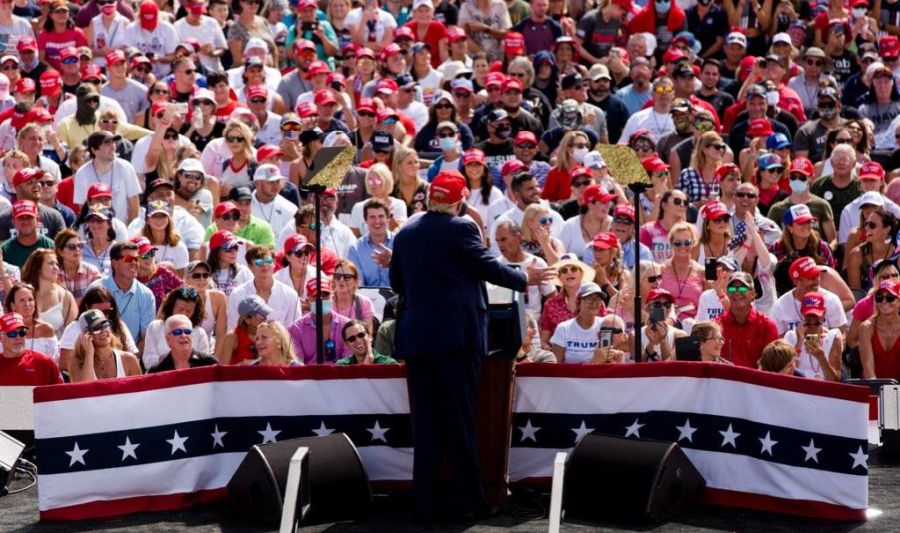 Several weeks ago I wrote an article for The Stream, urging the president to take his case documenting election fraud directly to the American people. No doubt others have urged him to do the same.

Last week, he made that case in an excellent tightly-argued 14-minute speech, presenting extensive evidence of the various types of election fraud that occurred in key battleground states. Millions of people have viewed this speech online, but many more — especially in Georgia and Arizona — need to hear the president make his case in person … and soon.

Take His Case to the People

Indeed, the president should immediately take his case to the people with two large public rallies, in Georgia and in Arizona, preferably in front the state capitols in each of those states. When he does, he should urge his supporters to demand that their governors and legislative leaders convene special legislative sessions to address and remedy the election fraud there.

In Georgia, he should urge supporters to demand decertification of the vote, based upon video and other evidence of massive late-night fraud in Fulton and other counties. In Arizona, he should also urge concerned citizens to demand that the Maricopa Board of Election supervisors comply with the subpoena releasing the voting machines for audit by the state senate.

If he makes these decisive moves, he will dramatically increase his chances of prevailing in the battle to restore election integrity and secure the victory that he most assuredly won on November 3rd.

DOJ/FBI and Courts Not Stepping Up

Here’s why. To date, relevant law enforcement agencies, including the Department of Justice and the FBI, have shown no inclination to expose, let alone to prosecute or remedy the fraud. Similarly, the courts have repeatedly signaled that they do not want to arbitrate the outcome of the election.

Apart from a January 6th “Hail Mary” in Congress, that leaves state legislatures (and officials accountable to them) as the only bodies capable of effectively addressing the fraud. This by either decertifying the current slates of Biden electors or by appointing Trump electors instead. (Although the Supreme Court may eventually agree to hear the Trump campaign’s case in Pennsylvania, it will be much more likely to act soon enough if state legislatures themselves begin to take the evidence of fraud seriously).

State legislatures have also proven reticent to take decisive action, at least in an official capacity involving majorities of their members.

Nevertheless, in both Georgia and Arizona, that could yet change if the president mobilizes his supporters to apply effective pressure on governors, legislators and other state officials.

In Georgia, a number of factors suggest that if Trump holds a rally there soon — meaning this week, well before the one currently scheduled for January 4th — such an event could make the difference there. A majority of Georgia voters think fraud tipped their state to Biden. A majority also favor convening a special session. An overwhelming majority now disapprove of Governor Kemp’s job performance, largely because he has refused to address evidence of fraud in any meaningful way.

In addition, a subcommittee of the Senate Judiciary Committee overseeing election integrity has just called for a special session and decertification of the vote for Biden based on its evaluation of the evidence. Finally, a majority of members of the Georgia state house now likely favor a special session — and possibly decertification — though the Republican legislative leadership there continues to resist convening one.

All this suggests that many Georgians are primed to demand action of their state leaders and that state leaders need to hear from Georgia voters in massive numbers to motivate them to act.

It also suggests that getting them to act — by disallowing fraudulently counted or illegally cast ballots — will make the difference. The number of such ballots vastly exceeds Biden’s current margin in Georgia. Just disallowing the Biden-only votes produced by the now famous late-night counting of under-table ballots would alone tip the state to Trump. So would disallowing many other categories of documented illegally cast ballots.

A decertification of the vote in Georgia, or recertification for Trump, would encourage Arizona to do the same, especially if Trump decides to lead a rally there. Indeed, the Arizona legislature is apparently just a few votes short of the needed majority for legislative action to decertify. Further, an audit of Maricopa voting machines would likely put President Trump well over the top, based on the error rate determined by sampling a voting machine in another Arizona county, .

But if Arizona and Georgia were to decertify or recertify, the President would need only Wisconsin, Pennsylvania or Michigan to do the same and the election would go to Trump, or at least be sent over to the House of Representatives. And in Wisconsin, the Supreme Court has outlined a path by which the Trump team could induce decertification: by challenging absentee ballots obtained improperly by people who falsely or illegally claimed indefinite confinement. In fact, the number of illegal votes that the Trump campaign has identified in Wisconsin vastly exceeds Biden’s current margin.

The Logic is Simple and Compelling

The strategic logic in support of this course of action is simple and compelling: To win, the president’s team must get key state legislatures to exercise their constitutional duties and prerogatives. To get them to act, political pressure must be focused on Republican governors and/or legislative leaders in those states. Yet, only a massive public outcry in those states can now generate such pressure. And that means Trump must rally his supporters in those states with a specific call to action.

President Trump has been abandoned or betrayed in his fight to remedy fraud by formerly-friendly media outlets, the courts, the Justice Department and all but a handful of leaders of his own party. But he still retains one massive source of political support and power: the millions of frustrated people who voted for him who know the election was stolen. Mobilizing those supporters to demand specific action by their state legislatures could yet give the President the political leverage he needs to change the dynamics of this contest.

In fact, if the president rallies his supporters, first, in Georgia, and then in Arizona, and possibly other states as well, the whole fraudulent electoral house of cards could come crashing down swing state by swing state. Perhaps just in time to secure the victory he won on November 3rd.

Michael Del Rosso is Vice President and Senior Fellow of the American Strategy Group, a think tank dedicated to understanding the strategic threats to the United States. Over the past two decades he has actively worked to form and advance both conventional and alternative strategies and policies for the USG to address the existential threats to the United States and our allies. His focus is on dimensions and domains of conflict outside of the bureaucratic consensus; examined against the full spectrum of all threats, doctrines, objectives, tactics and hazards necessary to support the new strategic realities the world faces.