Today, the Center for Medical Progress released a fifth video of their investigations into Planned Parenthood. With each video, one wonders how it can be more disturbing than the last and, with each video, it happens.

And as with each previous video, the newest one refutes the talking points, the political shields, desperately being wielded to cover what Planned Parenthood is doing — altering their procedures and selling “samples” for money. They talk about “samples.” They talk about the “product of conception.” Only when they drop their guard do they speak truthfully, as in the fourth video when one of them explains that it’s a baby.

Melissa Farrell, Director of Research at Planned Parenthood Gulf Coast, features prominently in the video. Coming in at just under 16 minutes, it includes grotesque and damning moments that clearly blow the cover Planned Parenthood is desperately trying to maintain. Here are three lies, debunked in this video:

Lie #1: They don’t alter the process

It’s been said time and time again that Planned Parenthood never alters their process to procure fetal tissue. They emphasize this because it’s against the law to alter an abortion procedure in the interest of the baby body parts aftermarket. But 18 seconds into the video there’s this: “If we alter our process and we’re able to obtain intact fetal cadavers, it’s all just a matter of line items.”  (18 seconds into the video)

Also: “We’ve had studies in which the company, or in the case of the investigator, has a

specific need for a certain portion of the products of conception, and we bake that into our contract, and our protocol, that we follow this, so we deviate from our standard in order to do that.” (1:45 into the video)

And this: “Some of our doctors in the past have projects and they’re collecting the specimens, so they do it in a way that they get the best specimens.” (4:23 into the video)

Yes, they are. When Melissa Farrell referred to fetuses as “a matter of line items,” she is talking about money, discussing how to charge to get the most out of each baby. Here are some other examples from this fifth video.

“My department contributes so much to the bottom line of our organization here.” 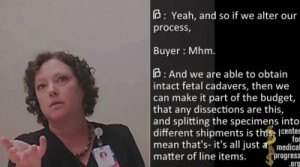 “If we alter our process, and we are able to obtain intact fetal cadavers, then we can make it part of the budget that any dissections are this and splitting the specimens into different shipments is this — it’s all just a matter of line items.”  (7:58 into the video)

While, in the last video, the doctor admitted that these are in fact babies, there are still those who would argue against it. In the final portion of the video, we have a sobering reminder that these are, in fact, babies. Even the use of the word “cadaver” implies that they know these were living human beings, although they are not treated with even a modicum of human dignity. When the videographer asks to see examples of the babies aborted that day, clinic workers laugh and tell him, “We had a really long day and they’re all mixed up together in a bag.”

She then goes on to pull a 20-week twin out of the freezer. A regular freezer, just like the one you probably have in your kitchen.

They put the baby through a pasta 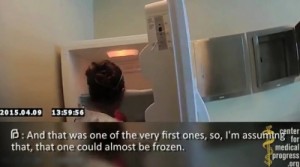 It is hard to imagine what the pro-abortion movement will come up with next to defend the barbaric practices of Planned Parenthood. Their defenses have been destroyed. We can clearly see what is happening; we can hear it in the words of Planned Parenthood’s own employees. The Center for Medical Progress, the group behind these undercover videos, says there are more videos to come. One can hardly comprehend how much worse it can get.