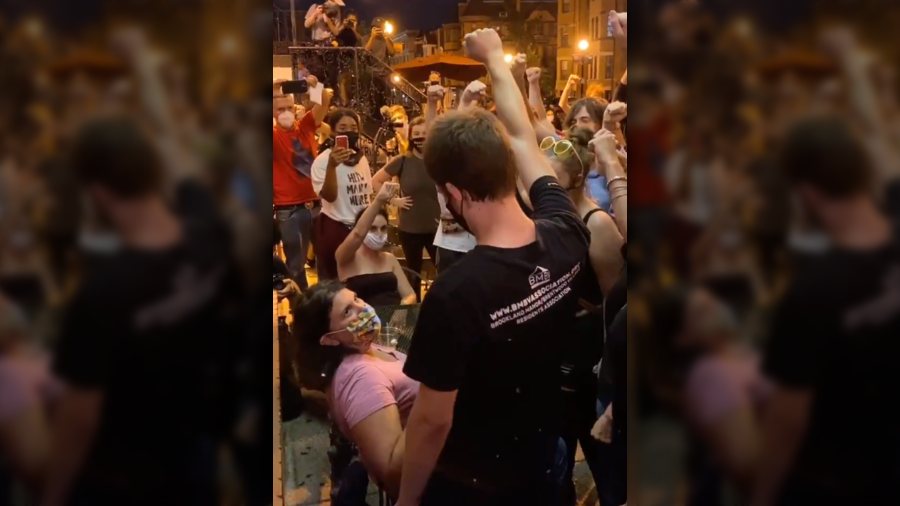 I grew up in a socialist society, but I’ve found it hard sometimes to talk about socialism in America. When people like me identify the blatant failures of socialism, its advocates often argue that the socialist countries we’re talking about are “not really socialist.” In other words, no true socialism has ever existed. Hence, there is a need to practice true socialism here in America.

The Reality of Socialism

I think socialism should be defined based on historical facts, not on utopian fantasies that exist only in its campaigners’ heads. It’s like a mirage: it only looks good from a distance. That’s why its advocates are usually those who have never lived in a socialist place. But I have. I know what socialism is like because I did not view it from afar. I was in it.

In this election, choose freedom over tyranny.

In socialist societies such as, China, Cuba, North Korea, Poland, Romania, the Soviet Union, Slovakia, Ukraine, Venezuela, just to name a few, past and present, everything belongs to the centralized government, which directs and plans the economy. There is no private property.

The purpose of the system is to distribute wealth equally and to end inequality and poverty. On paper it sounds very attractive. In reality, all socialist countries end up in one place: shattered economies, poverty and the destruction of civilization. My own childhood experience illustrates this.

But the most devastating effect of socialism is not economic. Power corrupts human beings. People inevitably abuse and misuse it. Jesus insists that within the Christian community, the ones who want to be great must act as servants instead of wanting to be looked upon as stars. In the secular world, however, the only way to prevent such an abuse is to allow competing powers to coexist through a system of checks and balances. Checks and balances are totally absent in socialism. A centralized planned economy demands that power be solely placed in the hands of the government.

This creates an elite class at every level of society. Exerting power over others brings enormous pleasure and satisfaction to the ones who are in authority. The lure is strong. It’s almost impossible to give it up under any circumstance. In the course of protecting their power, these elites will often use intimidation, manipulation, fear and anxiety as tactics to ensure subjects’ total obedience.

During the Cultural Revolution (1966-76), my family lived in an apartment in a college in China where my dad was a professor. When I was about 3 or 4 years old, I was awakened at midnight by the voice of a school official over a loudspeaker outside directing all adults to get up, get dressed and immediately report at the Square of the Red East. Within a minute, my parents were gone. I was horrified. I began to scream. Soon my cry was drowned out by the howling cries of children from every direction.

I recognized two of the voices belonging to my friends whom I had played with the day before. I felt a sense of relief. Suffering alone was the most horrifying experience for a child. A friend’s voice, even a terrifying cry, would signify the existence of another human being, and thus, the sense of not being alone. My parents came back the next day, but I still live with the trauma.

My family lived in one small room. Without space for privacy, I often heard my parents’ conversations and understood the fear and uncertainty adults faced each day. One must be extremely cautious in words and actions when living in a totalitarian society. One misstep with the authorities may result in a catastrophic change both to the person involved and to the whole family. Such wariness and anxiety must sound familiar to anyone who has lived in a socialist society.

Because of my early exposure to the adult world, I developed very early a sense of fear that something dreadful was about to take place. The oppression and maltreatment did not just come from authorities, however. An authoritarian regime extracts the vilest part of a person and drastically affects the interpersonal dynamics among ordinary people.

When I first arrived in the U.S., I noticed the politeness and respect American people exhibited. It did not take long for me to conclude that such good manners in part resulted from a culture that values freedom and human rights. It recognizes that humans are free and created equal. No human possesses any right to control another’s life or dictate another’s belief. Along with that comes the strong sense of mutual respect and tolerance.

But this is not so in a socialist country. If you came from a poor family, you were considered pure and holy. You had more rights and were expected to be treated with decency. Conversely, people like my parents, who happened to be born in a not-so-poor environment, had to live like dogs with their tails tucked between their legs (my dad’s expression).

With no sense of security, the human survival instinct often kicked in. People did things that they normally would not do in a free society. Often people who were from rich backgrounds were compelled to denounce their own families and heritages, to show their contrition and seek amnesty. It was a common practice for friends to report friends to the authorities so as to gain favor and benefits. An authoritarian society produces the foulest behaviors among ordinary citizens.

It’s my conviction that freedom is a precondition for human dignity and human rights. Socialism, strengthening the government’s power, is the most oppressive machine in human history. The day before I left China for America at the end of 1989, I was summoned to the human resource office in the college where I worked. As soon as I showed up, the lady who held the lowest rank in the office opened up a rant, shouting at me for at least 5 minutes in seemingly one breath, demanding to know why I’d failed to show up at the remote mining village for reeducation. She shouted because I meant nothing to her. She shouted because she could. She shouted because it made her feel powerful and important.

America – The Last Bastion of Freedom

I have always felt it a challenge to show my native-born American friends what it is like when the concept of freedom doesn’t exist. But recently pictures circulating on social media have done what I had failed to do. The shaking fists and indignation shown to the diner in a restaurant who dares to disagree speaks volumes. I’m sure none of the provocateurs care about individual liberty. They are promoting something that is entirely anti-republican, anti-America. They intimidate those with whom they disagree, and rob them of their dignity and rights.

I would never have thought such a thing could happen in America. The socialist and authoritarian overtones are alarming. If we allow such behavior to flourish, however, soon this kind of conduct will become a norm instead of an aberration. By then, America, the last bastion of freedom, will be well on her way to become a tyrannical state.

As a Christian, freedom has special significance to me. Though I’ve never perceived America as a Christian nation, I recognize the important role America plays in human history in general and in God’s salvation history in particular. Far from being perfect, still America is the city on the hill and beacon of the world, because it is the freest place on earth. Its political system ensures its citizens the highest degree of liberty. It safeguards human dignity, worth and rights. It brings law and order instead of chaos and oppression.

For me, American freedom points to a much greater spiritual reality, that is, the believer’s freedom in Christ (Rom 8:21; 2 Cor 3:17; Gal 5:1). Like a foreshadowing or a foretaste, American freedom provides a tiny glimpse of the ultimate freedom that the believer can have in Christ. Just as marriage reflects the relationship between Christ and the church, American liberty is emblematic of the greater reality the followers of Jesus enjoy in Christ. Just as we strive to protect marriage, we must also endeavor to defend American freedom because it, too, has sacred value!

In this election, choose freedom over tyranny.