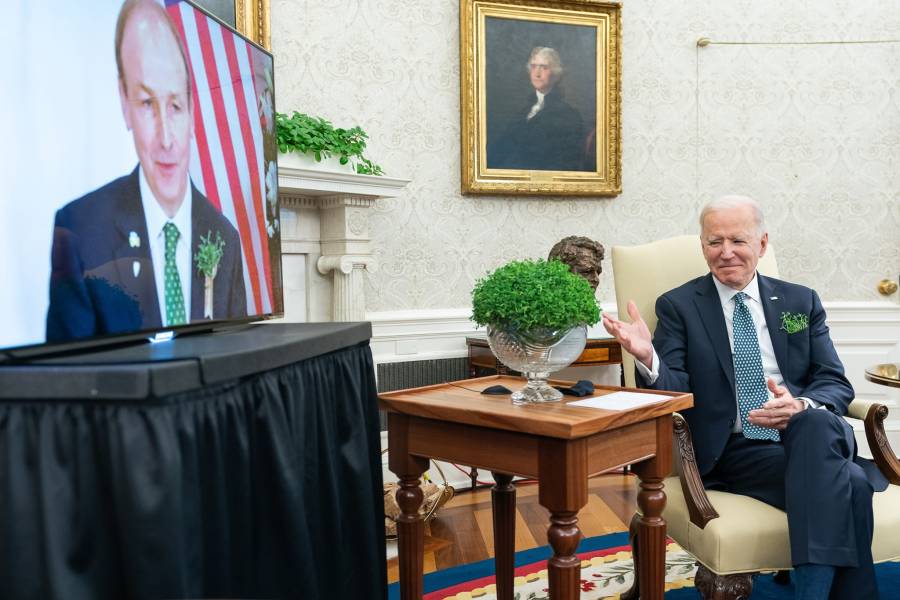 On St. Patrick's Day, Ireland Prime Minister Micheál Martin presented a bowl of shamrocks to President Biden — a tradition that dates back to 1952 with President Truman.

Double-talk is to the Biden Administration what jelly beans were to Reagan. The RNC shares the latest. On one hand, in his ABC News interview Joe Biden tells migrants “don’t come.” But his DHS Secretary turns around and tells migrant parents, “we will not expel” your child if sent here alone.

Isn’t this a problem? Not to Democrats. Don’t test for COVID and you can deny there’s COVID positive illegals are being distributed throughout the country. See? Problem solved!

Earlier this week we described how Joe Biden is sending the Federal EMERGENCY Management Agency to help deal with the situation at the border that he and his team refuse to consider an emergency. It’s like calling on Orkin when ants are swarming your house, but denying you have a problem with pests. It’s like calling in the Ghostbusters but denying your house is haunted.

NBC News reports that border agents and sector chiefs were given a verbal order to deny ride-alongs and restrict information given the media. “The officials say the restrictions are seen as an unofficial ‘gag order’ and are often referred to that way among colleagues.” And forget about getting accurate data. As the Federalist reports, “Officials responsible for gathering data about the number of illegal immigrants in federal custody, they say, have been told not to share that information with anyone to prevent possible leaks.”

The most transparent administration in history gave the order orally. No paper trail, no real accountability. Just a verbal mandate to keep the American people from knowing the full truth of what is happening on our southern border .

On Wednesday, Biden … and of course the whole posse that travels with a president … left the White House to tout the $2 billion COVID relief boondoggle. Biden traveled to Chester, Pa to visit Smith Flooring, Inc as part of his “Help is Here” tour.

Was a photo op in a swing state really worth all the fuel and time? Not like Joe didn’t want to stick around longer.

He had asked Smith Flooring co-owner Kristin Smith if she had any questions, but Smith passed. “We don’t have any questions but we wanted to say thank you.” A business owner has no questions for a man set to propose a massive tax increase? About a still fragile economy and how it impacts the housing, and thus the flooring industry? Travertine versus marble? Heck, no questions about the poor pooch sent packing from the White House?

I don’t think so. Joe was whisked away before he could field any questions from reporters.

McEnany told Fox News’ Outnumbered: “No one knows what the news cycle will be. No one knows what will happen and to put this pressure on it and have this buildup where we will all be watching this, it’s an extraordinary way to go about things. A confounding strategy and I’m not sure why they chose to deal with it.”

I think we know the reason: Nine days gives plenty of time for the White House to screen questions and prepare canned answers.

Not that the White House has much to worry about from the White House press corp. That famously adversarial press that took apart Trump’s every word and usually found fault with it? They’re more like Biden’s PR company. You saw the fawning over his COVID anniversary speech. Check out how Politico describes Biden: “Earlier in his political career, Biden had a reputation for committing gaffes, and he and his team had been cautious to ensure message discipline on the campaign trail and during the first weeks of his presidency.”

“Earlier in his political career” … as in waaaaaay back in the past. As if he got over the gaffes sometime in the Carter years.

On March 25, Biden will face the press. But expecting thorough questioning is like betting on a team of midgets to win March Madness. He’ll be tossed so many softballs, he’ll need a batting glove to ward off blisters.

The border’s in crisis. Immigrant children’s lives are being put in danger by Biden’s policies. Shouldn’t the press push him hard on this? Yeah, but they won’t. Because protecting the border, protecting the lives of children, is far less important than protecting the man they helped put in the Oval Office.

Politico calls it “message discipline.” And if there’s anything the powers running things in Washington know, it’s staying on message. Even when sending mixed messages.