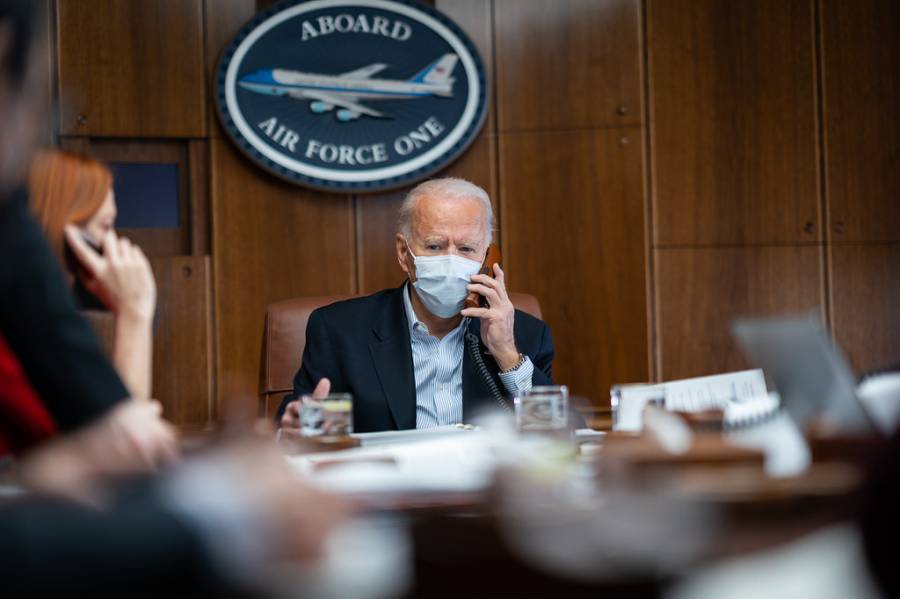 President Joe Biden participates in a phone interview with Univision Friday, Feb. 26, 2021, aboard Air Force One en route to Houston.

Joe Biden is deploying FEMA to the border to help with the flood of young illegal immigrants pouring into the country.

FEMA … as in the Federal Emergency Management Agency. And yet, the White House insists there is no emergency on the border. In fact, the minute he got to the Oval Office, Biden issued a proclamation declaring a formal end to the emergency Donald Trump declared.

It is not an emergency. It is not even a crisis. To the White House, the massive new rush of illegals across our border with the arrival of Biden’s open borders policies is a “challenge.”

Nancy Pelosi used the White House’s favorite new word Sunday morning on ABC News’ This Week. “The facts are these: there are more children. About 600, 700 more children, unaccompanied children, coming over the border. This is a humanitarian challenge to all of us.”

And Nancy, it’s an average of 400 children per day who are caught. Facilities are being so overrun, AP is reporting 3,000 teenage boys will be shipped north to Dallas and housed at the Kay Bailey Hutchinson Convention Center.

We face an emergency at our border. A self-inflicted crisis. A crisis that must also be described as mass child abuse.

Where is the Concern for Children Now?

According to the New York Post, the one-month total of children arriving at the border is nearly as high as the number of kids for all of last year. Even CNN reported that there were more than 3,700 unaccompanied migrant children in Border Patrol custody. This is a record high.

Kids are being stuffed in cages, containers, tents. Leecia Welch of the National Center for Youth Law told CNN some have not seen sunlight in days. CNN describes children as being “terrified.”

Remember the memes and celebrity outrage over Trump putting “kids in cages”? Where are those celebrities now?

Heaven knows what those children experienced on their journey. As detailed by John Zmirak and me in The Politically Incorrect Guide to Immigration, somewhere between 30%-80% of girls and women are sexually assaulted along the way.

Thanks to Biden, business is booming for human and sex traffickers.

This is not Fox News talking. It’s Mexico. According to Reuters, Mexico’s government is concerned Biden’s policies “incentivize migration” and are “stoking illegal immigration and creating business for organized crime.”

One Mexican official, who spoke to Reuters on condition of anonymity, said organized crime began changing its modus operandi “from the day Biden took office.”

Sheriff Mark Daniels of Cochise, AZ, told Fox News Biden’s decisions have CBP so stretched the cartels are in control of some checkpoints.

Drugs are pouring into our country again. Take fentanyl. “We are seeing a dramatic increase in fentanyl seizures this fiscal year, more than 360 percent higher than this time last year,” Acting Customs and Border Protection Commission Troy Miller said last week. The amount seized during the first five months of fiscal year 2021 has already surpassed all of fiscal year 2020.

Cesar Peniche is attorney general of Chihuahua, the Mexican state with the longest stretch along the U.S. border. He told Reuters the higher concentrations of migrants in border areas have encouraged gangs to recruit some as drug mules, and kidnap others for money.

Terrorists See the Open Gate Too

Terrorists, too, have taken notice. According to Rep. John Katko of the House Homeland Security Committee, the Border Patrol has captured people on the terror watchlist in recent days.

“Individuals that they have on the watchlist for terrorism are now starting to exploit the southern border,” Rep. Katko said Monday, “We need to wake up. We need to understand.”

The danger cannot be underestimated. The Latin American cartels have teamed with Hezbollah, the Iran-backed terror organization. The DEA’s “Operation Cassandra” was trying to take down Hezbollah’s drug-running operation into the U.S., but Operation Cassandra was sabotaged by the Obama-Biden Administration. Obama didn’t want to “rock the boat” with Iran during the nuclear negotiations. Iran got billions and a path to a nuke. What’d we get except a flood of drugs and catastrophic spike in overdoses?

In addition to the billion dollars a year Hezbollah is earning to help fund its terrorist efforts, consider the obvious: If the most dangerous terrorist organization on the planet can help smuggle drugs into the United States, what else — or who else — could they smuggle in? Especially now.

The Border is Open … Well, Not Yet

Since taking his oath of office, Biden’s offering a path to citizenship, stimulus checks, health care, education, shutting down construction of the wall, pulling agents from the border, restarting catch-and-release and cutting ICE off at the knees.

One of his appointees even declared in Spanish the border was “open.” Roberta Jacobson, Biden’s point person for the southern border, later clarified she’d made a mistake. The border is closed, she said in Spanish, and that “now is not the moment for migrants to arrive irregularly into the U.S.” In other words, the border isn’t wide open … yet.

The perils of code-switching, and a major gaffe by Roberta Jabobson whilst warning migrants not to make the journey to the U.S.: "So I believe that it's very important to highlight that THE BORDER IS NOT CLOSED…" pic.twitter.com/9Kf7gJzWyG

Yet, according to the White House and Speaker Pelosi, none of these actions has anything to do with the massive influx of illegal aliens.

On Sunday, Pelosi blamed climate change. And if you don’t like that answer, Pelosi blamed Donald Trump. Yes, there is now a surge after Trump left because he left a “broken system.” (White House press secretary Jen Psaki echoed the point Monday, admitting a “big problem” at the border, but blaming the former president.)

Consider how stupid that is. It’s like saying Trump broke a pipe. (After working four years to install new pipe.) Yet the pipe he broke only began leaking after he left … after Biden started hammering away at the pipe. And it’s not just leaking, but gushing.

Even if you accept Pelosi’s ridiculous notion of Trump leaving a “broken system,” a gush through the burst pipe only happens if you deliberately turn the water on full blast.

Truth is, the immigration system was only “broken” by Trump if your “system” is to funnel as many illegal immigrants into the country as possible to fundamentally transform America.

And true enough, Cinco De Mayo has a better chance of being festive than the Fourth of July.

In his speech Thursday night, Biden said that if we Americans were good little boys and girls, and did everything Papa Government says, maybe, possibly, perhaps on Independence Day, we could gather with a handful of family and friends in our backyards for barbecues.

Meanwhile Biden is letting COVID positive illegal immigrants fan out into the country. Texas Governor Greg Abbott says the White House won’t even tell him how many COVID positive people he’s released into his state.

American citizens and legal aliens must comply with mandates for even the possibility of gathering for Independence Day. But come Cinco De Mayo, it seems COVID infected illegals can gather to their heart’s content.

God help the Federal Challenge Management Agency. What is now a flood is quickly becoming a tidal wave.

God help the Border Patrol to protect our border and citizens. Because it seems their bosses aren’t interested.

God help the children. Because the celebrities and Never Trump media have moved on.