As White House officially touts "Biden-Harris Administration," America must ask: "Is Kamala Harris ready or fit to be commander-in-chief?" 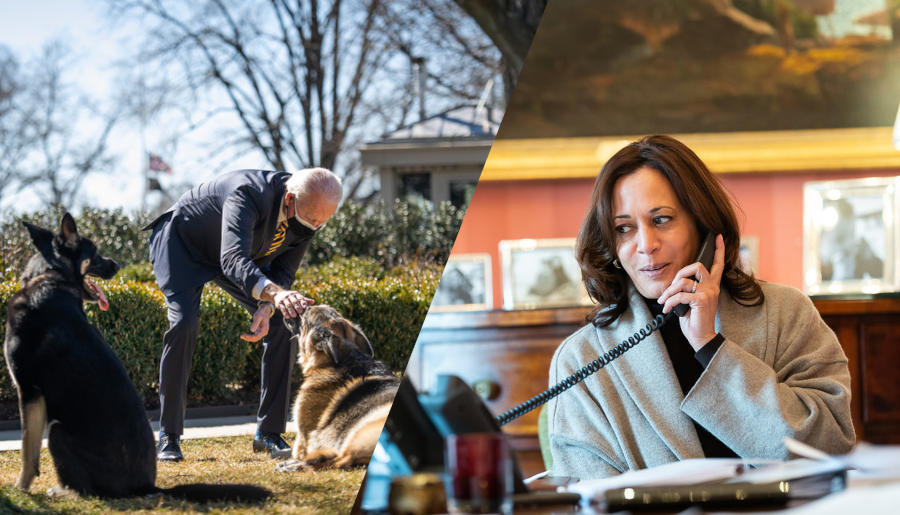 Update: Joe Biden on Wednesday tapped Kamala Harris to head the administration’s response to the border crisis. Given her open border posture, this is like tapping Jeffrey Epstein to chaperone your high school dance. Said Biden, “When she speaks, she speaks for me.” Meanwhile, a rotten tomato to the Associated Press for borrowing the White House’s language for the crisis: “Biden Taps VP Harris to Lead Response to Border Challenges.” Harris, AP reports, will be tackling the “migration challenge” at the border and “work with Central American nations to address root causes of the problem.”

Not even Democrats in her home state of California preferred her as vice-president. Neither did some of Joe Biden’s closest and most trusted advisors and friends. According to Politico, Sen. Chris Dodd … part of Biden’s VP selection committee … didn’t trust her after she strongly suggested Biden was a racist. When he asked her about it, she just cackled: “That’s politics.”

And yet, it is looking increasingly like Kamala Harris is President of the United States, at least functionally, and will make things official before long.

It’s not just because Joe Biden called her “President Harris” again last week. Or because of Biden’s triple-fall on the steps of Air Force One.

Or because this has smelled like The Plan since last summer: Sneak “moderate” Biden past voters, and then shove him aside for Obama and the party machine’s choice.

No, it’s because the White House is now officially abandoning the last pretense that this is the Biden Presidency.

According to a memo leaked to Outspoken, America is now officially under the “Biden-Harris Administration.”

A top communications person in the White House has instructed federal agencies to “Please be sure to reference the current administration as the ‘Biden-Harris Administration’ in official public communications” [The boldface is in the original.]

According to Outspoken, this type of elevation of a vice president is unprecedented.

Already the One Talking to Foreign Leaders

Also unprecedented is the leading role Harris has taken in talking to foreign leaders. She has been conducting solo, introductory calls, since day one. She talked to leaders of major allies like French President Emanuel Macron. Then Israeli Prime Minister Benjamin Netanyahu. Then Norway’s Erna Solberg. And Canada’s Justin Trudeau.

“World leaders expect to hear from the President of the United States,” former acting Director of National Intelligence Richard Grenell told Outspoken, “There are certain times when the Vice President has to step in, but not for the introductory call.”

Harris is also at Biden’s side at important events, like their visit to Georgia in the wake of the mass shooting there, and the first bilateral meeting between the U.S. and Canada. Scroll through the White House Flickr page and see how many photos there are of Biden and Harris together. In fact, take note of how many shots are of Harris in action relative to Biden at work. (Though admittedly, the shots of Biden with his dogs are precious.)

“The fact that the White House is instructing federal agencies to replace ‘Biden’ with ‘Biden-Harris’ after less than 60 days is indicative of the struggle Joe Biden is already having being president,” Grenell told Outspoken. “This is a signal that he can’t do the job alone.”

But Can Harris Do the Job?

Sure, the presidency is a huge job and if you’re Donald Trump and you’ve got a Mike Pence or you’re Bill Clinton with Al Gore, you load their plate.

But has Kamala Harris given any indication at any time she’s capable of sitting in the big chair? That she even deserves co-billing?

Two stories within just the past 48 hours offer a resounding “No!”

We have a crisis at the border. Children are getting hurt. Girls are being sex trafficked. Drugs are pouring into the country. Our facilities are overrun with numbers not seen in decades. A dangerous percentage turn out to be COVID positive, and scores of COVID positive illegal immigrants have been released into the public. The American border is under siege.

Someone asked Harris Monday if she — the Harris of the “Biden-Harris Administration” — was going to the border. “Not today,” she cracked and cackled.

“Do you have plans to visit the border?”

You think Angel Families are laughing? The kids experiencing heaven knows what at the hands of coyotes? How about the health professions concerned about COVID-positive migrants crowding the border? Or the border agents being run ragged? The ICE agents who are seeing their efforts cut off at the knees? The huddled masses? The victims of MS-13 and cartel violence? The mother whose child overdosed last night on fentanyl?

No, the only people laughing are the cartels, human traffickers, the radicals eager to wreck America’s, sovereignty … and Kamala Harris.

Sure, Kamala, the media will give you a pass for mocking the suffering of others … mostly people of color, incidentally. But here’s the thing about the border crisis facing this administration: If your name’s on the marquee, it’s your show. Your responsibility.  You own this and cannot laugh it off.

Not Saluting Our Soldiers

When Harris is not subbing as commander-in-chief in calls with world leaders, she is snubbing our finest and bravest.

It’s become tradition in recent years for our Vice President to return the salute of the soldiers manning the VP planes and helicopters. Joe Biden certainly did when he was Obama’s VP. Harris has abandoned the practice. At least four times in recent days she refused to return the honor guard’s salute when boarding Air Force Two.

The reaction has been harsh.

DISGRACEFUL: @VP Kamala Harris refuses to salute the honor guard at the steps of the aircraft. It is a clear demonstration of her dislike for those in uniform, both law-enforcement and military. pic.twitter.com/7QFHzamnt7

Naturally, the media rushed to Harris’ defense. And yes, Pentagon spokesman John Kirby is correct. “There is no overarching instruction or regulation that requires the President or Vice President to return hand solutes from members of the Armed Forces.”

Also, many pointed out that Harris as Vice President is not technically in the military chain of command.

So no salute is required.  But honoring the Marine honor guard has become tradition. A sign of respect since Ronald Reagan.

The White House tells us it’s now the Biden-Harris Administration. The White House has draped her in its mantle. And in that fresh-found capacity and authority she has made the deliberate, public choice to do away with honoring our men & women in uniform.

It is also indisputable from even the past two days Harris is unfit to be commander-in-chief.

Our military, our border, our nation deserves so much better … no matter what the White House puts on its press releases.