Media can't have it both ways: Either Biden's fine, and thus poking fun at a presidential fall is a time-honored tradition. Or he's not well and it's not funny, and we have to deal with the national security implications. 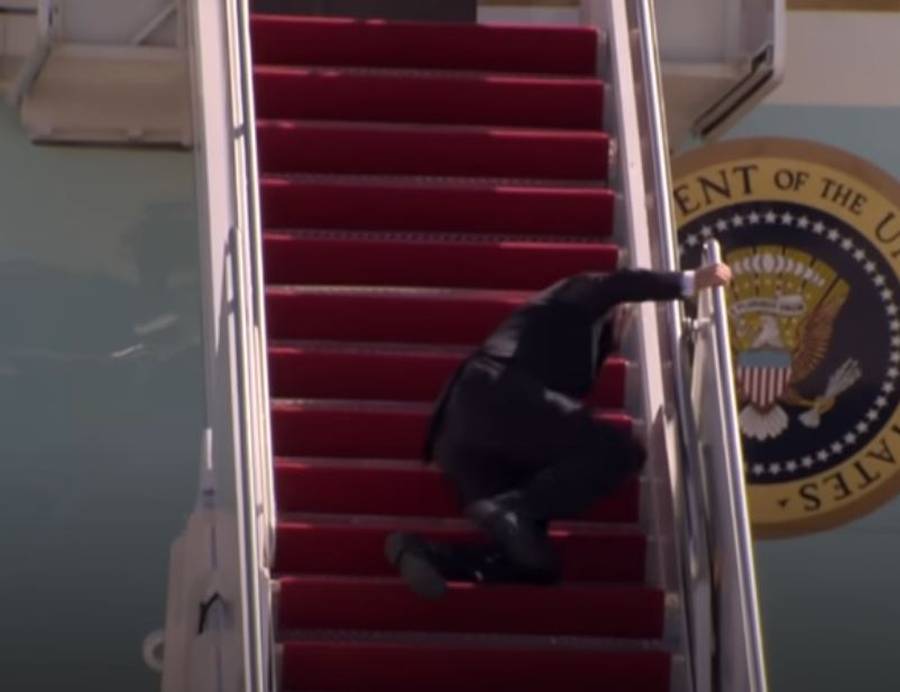 On Friday, Joe Biden fell not once, not twice, but three times while climbing the stairs to Air Force One.

You’ve seen the video. You’ve laughed at the memes.

It wasn’t the wind folks. pic.twitter.com/jYc01dBZCe

For some reason, humans find other humans falling down funny. America’s Funniest Home Videos made a mint off this quirk in the human character. It’s especially enjoyable when the person taking the tumble is someone powerful or famous. The leveling of the high and mighty. Take videos of epic supermodel catwalk tumbles. Or Oscar-winner Jennifer Lawrence at the Academy Awards in 2013. And a year later on the Oscar red carpet.

When it’s a president or would-be president? Entertainment gold. It should be etched in the Constitution: “Congress shall make no law abridging the freedom to laugh at a president face planting in public.”

Yet, Joe Biden falling is a different breed of fish. The media seems aghast at the notion of people enjoying memes of the president’s fall. Yet, shockingly, they are aghast for absolutely the wrong reason.

They are deliberately ignoring the elephant on the staircase. The White House and the media insist Joe Biden is the picture of perfect health. Specifically, a Biden deputy blamed the three falls on a strong wind. On Monday, Press Secretary Jen Psaki blamed the “tricky” Air Force One steps.

MSNBC reporter Monica Alba put it down to a “human moment that happened to a human.” Meet the Press anchor Chuck Todd immediately concurred. “We’ve all run up stairs and had that moment ourselves. And if you haven’t, you aren’t a human being.”

You can almost buy what they’re selling. I actually “get” someone falling down three times in a row. He was moving at a fast clip up the stairs. Fell. Embarrassed and knowing cameras were on him, he jumps up before he’s settled and has a grip on why he fell. Goes down again. Now he’s doubly embarrassed, doubly anxious, doubly eager. Down he goes a third time. As Alba said, a “human moment.”

No biggie. Nothing worrisome to see here. Just one of those things.

This being their argument, they should have no problem with the time-honored tradition of finding humor in the fall of The Most Powerful Man in the World.

Especially, since these same people — including Joe Biden himself — made endless mockery and raised health concerns when Donald Trump took his sweet time getting down a steep, wet ramp in leather shoes at West Point. In fact, by Newsbusters’ calculation, CNN spent all of 15 seconds on how Biden “struggled to find his footing” … after spending 22 minutes, 13 seconds on Trump’s adventure on the West Point ramp.

The media is tripping over itself to downplay Biden’s fall. Yet, right after declaring the triple-fall was no big deal, great issue was taken with folks making light of Biden’s stair stumble.

Most ridiculous was MSNBC analyst Malcolm Nance who claimed memes about Biden’s fall, like Don Jr.’s tweet, could embolden an assassin. Said Nance, the humor “mainstreams the potential for danger.” (Funny. A Central Park production of Julius Caesar showing a Trump-look alike as Caesar getting stabbed to death was perfectly fine.)

Then again, maybe Nance is right. Having fun with a presidential fall is “dangerous.” After all, Chevy Chase made his career at Saturday Night Live impersonating President Gerald Ford falling down. And two women did try to kill Ford. So certainly we must blame Chevy Chase when a psychotic member of the Manson Family and a disturbed woman try to gun Ford down within days of each other. (Yes, I’m mocking the ridiculousness of Nance’s stance.)

Actually, you’ve heard Ford’s name a lot in recent days as people try to “defend” Biden’s fall. Why make a big deal of Biden’s triple fall when Ford became notorious for his stumbles? Two quick points: Ford didn’t fall nearly as often as the Chevy Chase caricature led people to believe. Second, Gerald Ford was arguably the most athletic president of the 20th Century. An All-American lineman at Michigan, Ford was a lifelong avid golfer, skier and tennis player. He also had bum knees from football that were so bad he had them both replaced after he left the White House. Then continued on playing golf and tennis.

In other words, Gerald Ford wasn’t a 78-year-old man weeks removed from tripping over a dog, and plagued with an increasing number of frightening mental lapses.

Biden Didn’t Fall in a Vacuum

Which gets to the real issue: If Joe Biden is as fit as a fiddle then nobody should have any problem with light being made of the fall.

However, Biden is clearly not well. Biden’s fall did not come in a vacuum. It came one day after he had again referred to the Vice President as “President Harris.”

It comes after an earlier trip over a dog broke his foot.

It comes after a series of appearances stretching over months where he’s lost track of what he’s saying, looks like he’s in a fog, and has forgotten basic facts — like the name of his Secretary of Defense and the world famous building he works in.

It comes after avoiding a press conference for the first two months of his presidency, and his staff refusing to allow reporters to ask him questions during his brief public appearances.

It comes as his health is being mocked by Russia’s Vladimir Putin. And China’s slapped around U.S. diplomats at their first face-to-face.

We can be grateful the president does not seem to have been in injured in his fall. But we also have to recognize Biden’s physical stamina and mental acuity is a matter of national security.

And that’s no joke.

If a struggling elderly president falls, and the media doesn’t properly cover it, does it make a sound? Yes. All the way to Beijing, Moscow and Tehran.