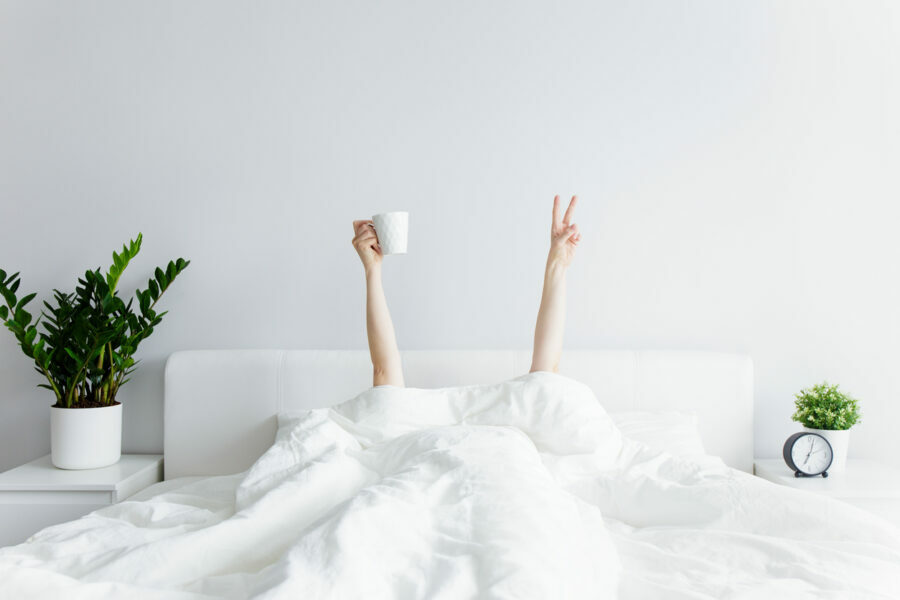 We’ve got a special Brew for you today, blended as smooth as cotton from Giza.

Mike Lindell’s three-day Cyber Symposium gets underway today, live on FrankSpeech.com. Lindell’s team of cyber experts will be laying out what he insists is proof the 2020 election results were electronically manipulated. Specifically, he’ll be revealing “cyber data and packet captures from the 2020 November Election” that will prove millions of Trump votes were switched to Biden.

The My Pillow king is putting his money where his mouth is. If a cyber expert at the symposium can prove him wrong, he or she will walk away with $5 million.

Some 46 states will have representatives there, Lindell says. 80 cyber-experts and over 50 national media reporters will be attending the event in person in Sioux City, South Dakota. This includes cyber-experts from skeptical social media fact checker LeadStories.com.

LeadStories.com lists the questions they want answers for. Look them over when you have a chance. To some extent they are fair. But there is a lot of “full and detailed” demand on a massive amount of technical material. All told, they’re creating plenty of wiggle room to declare the evidence “unsubstantiated” or “incomplete” or “unproven.”

CNN, of course, isn’t even waiting to see what Lindell has. They’re already declaring it a sham. But keep in mind, this is the same CNN that spent four years insisting a few Russian hackers and bots threw the 2016 election Trump’s way. And insisted the Steele Dossier was legit. And mocked Trump for saying the Obama administration spied on him.

Will Lindell’s evidence of foreign interference hold up? We’ll see. Overstock.com founder Patrick Byrne lays out why he thinks the data will hold up.

Do we know the election was hacked? No. Not yet.

Here’s what we do know. In the years and months leading up to the 2020 election, multiple news organizations and multiple Democratic politicians … including Kamala Harris … were shouting to the rafters that the American voting machines and election system were wide open for manipulation.

In fact, The National Pulse just uncovered a 2017 report from the Biden-linked Center for American Progress. In that report, the Center calls for “robust” election audits. They also talk about the vulnerability of our election machines. Here’s one glorious passage cited by Raheem J. Kassam:

Voting machines that record votes and tally them are run on software that is vulnerable to cyberintrusions. Well-resourced hackers, whether funded by foreign governments or criminal syndicates, have the access, ability, and motivation to infect computerized voting machines and tallying systems across America. This can occur even if the machines are not connected to the internet. Attackers, for example, can deploy software such as Stuxnet and Brutal Kangaroo to target offline voting machines.

What? Mike Lindell says that and Dominion sues him for a billion bucks and CNN derides him as a lunatic.

Suddenly, after November 3, these same people act like you have a closet full of tin foil hats to suggest the election system was screwed with. That the witnesses who swore they saw machines connected remotely were lying. Inventor Jovan Pulitzer breaking into Georgia’s election machines during a December hearing? That they just ignored.

Last week, Gateway Pundit posted a story and video it claims is of Dominion whistleblower. The teaser appears to show a Dominion employee agreeing he had the power to access the election system. This in direct contradiction of the Dominion CEO.

Is the video legit? Is it relevant? Maybe, maybe not. Put it this way. Do you think this video would have made the Mueller Report had it been taken Election Night 2016?

Then again, maybe the critics are right. Maybe Lindell should stick to pillows. Maybe those instances of votes switching from Trump to Biden right before your eyes were just cable TV glitches. Maybe nobody remotely accessed the elections, manipulating results.

Just the News has uncovered documented proof that adjudicators in Fulton County, Georgia took Trump votes … and ballots that should have been tossed … and turned them into Biden votes.

In multiple instances ballots that were rejected by the Dominion machines for “overvotes” (marks near more than one candidate) or “spoiled,” the marks for Trump were removed and the vote awarded to Biden.

This proof comes just weeks after an examination of ballot tally sheets compared to the ballots themselves indicated hundreds of votes in Fulton County had been stolen from Trump (and Libertarian Jo Jorgenson) and given to Biden. And that hundreds of other absentee ballots (which favor Biden) had been double-scanned. And how about this, as reported by John Solomon?

Five sequential batches of absentee votes each appeared with the exact same vote count of 392 for Biden, 96 for President Donald Trump, and 3 for Libertarian Jo Jorgensen, a count that state officials admitted was a statistical impossibility.

That’s just the start of the fraud in Fulton County. Biden “won” Georgia by a scant 11,779.

An Email from Wisconsin

Last week, Gateway Pundit released an email it had uncovered from Ryan Chew to Claire Woodall-Vogg in the wee hours after election night. After a sudden, massive, dubious vote spike for Biden erased Trump’s lead. Who are they?

Ryan Chew works for the Election Group, a George Soros-funded operation that worked far and wide to stage an election victory for Biden.

Woodall-Vogg is the Executive Director of the Election Commission of the city of Milwaukee.

Keeping in mind the vote spike, and the reed-thin margin, read this email:

“Damn, Claire. You have a flair for drama, delivering just the margin needed at 3:00 am. I bet you had those votes counted at midnight, and just wanted to keep the world waiting!” 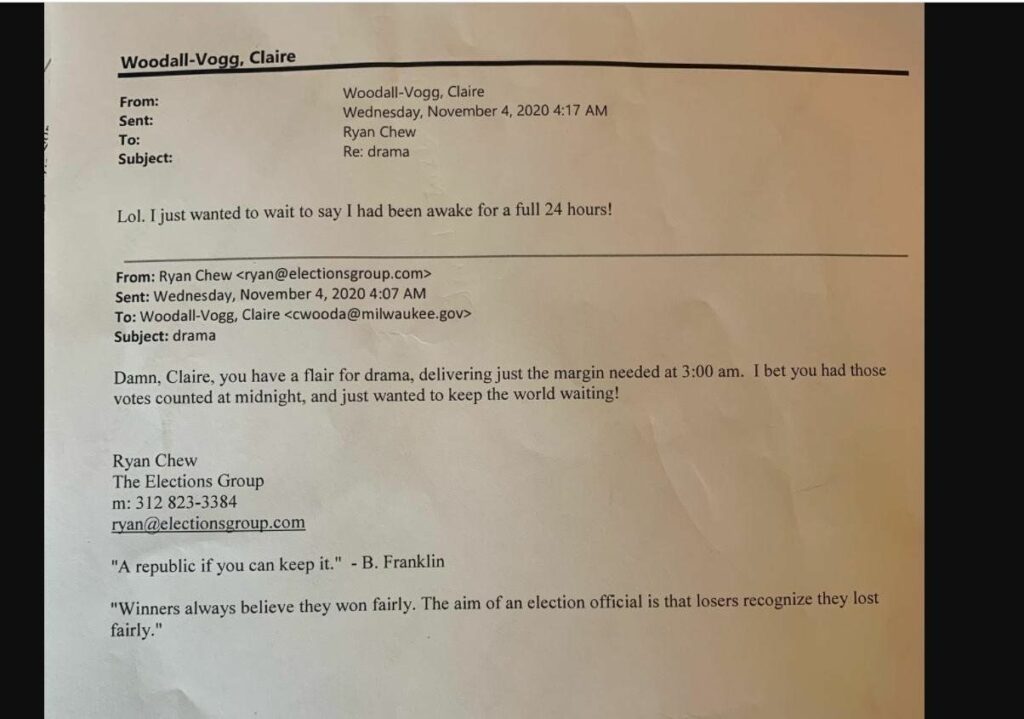 “Maybe that’s innocent, Al,” you may be thinking. “Now, if only there was evidence of Woodall-Vogg doing something peculiar on Election Night.” Funny you say that. Back in November, Gateway Pundit reported on Claire.

Seems she lost an election flash drive. And then was videotaped loading votes … with no GOP election observers on site.

Of course, she insists the lost drive was only gone a few minutes, and that chain of custody wasn’t broken, and that in no way shape or form was the election messed with. And of course, the Democrats running the state said “Okay. Fine.”

That Wisconsin spike? As natural as milk from a cow. Her Milwaukee having an 89% turnout? As crisp and clear as a Wisconsin winter night.

But let’s talk emails. In the wee hours of January 25, 2019, two dozen FBI agents stormed the home of Trump associate Roger Stone. Why? In part because he sent emails before the 2016 election that suggested maybe, possibly, he knew something about the DNC emails that supposedly the Russians had hacked.

Now, imagine if Robert Mueller had found an email from somebody in the Trump organization to a high-ranking, partisan election official in Wisconsin.

“Damn, Claire. You have a flair for drama, delivering just the margin needed at 3:00 am.”

And there was video of this election official running around alone with USB drives.

Five armies of SWAT agents would have hit Trump Tower. CNN would call it the “smoking gun” that the election was fixed. Press Secretary Sarah Huckabee Sanders would have been screamed at day-after-day about when was Trump going to resign.

We are choking on the smoke from election night fires that darken the sky coast to coast. Yet not only are we told there is no fire, we are told we’re crazy for even suggesting there’s smoke. (Even as the arsonists brag to Time magazine about their handiwork.)

Today, Mike Lindell begins a three-day effort to expose what he believes is an election night inferno involving the remote manipulation of votes. He’s so convinced he’s right he’s putting $5 million on the line to prove him wrong.

Americans, if you believe we have not only the right, but the duty to make sure 2020 was clean — win or lose — please pay attention to what is presented with an open mind. (And what happened in Wisconsin, and Georgia, and Arizona, and Pennsylvania, and Michigan, and ….)

If he’s wrong, the worst thing that happens is you get huge discount codes for My Pillow products. If he’s right, the whole world will know the election was stolen. The United States Presidency was stolen.

And it’ll be up to us to do something about it.

Stream publisher James Robison has commented on and urged us to see a video of Mark Levin. “What Ever Happened to Individual Liberty. ‘Soft Tyranny’ is Getting More Aggressive.” Says Rev. Robison, “We must all recognize it is only a Spirit-filled church family that can effectively address the great concerns Mark Levin raises.”