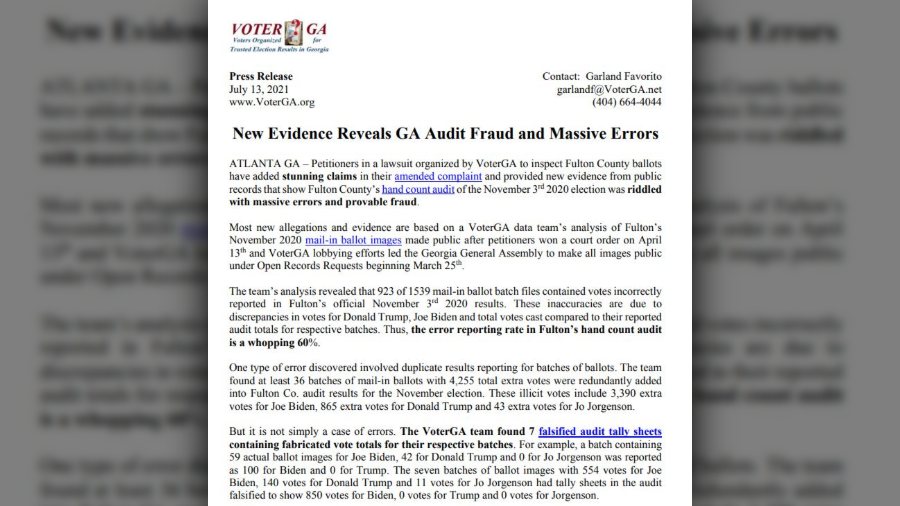 Wanna know why Democrats have been desperate to stop at anyone from looking closely at the November election? You need not look any further than yesterday in Fulton County, Georgia.

The voter integrity group VoterGA revealed some of what it has found when comparing actual ballot images with ballot sheets tallies. And friends, they found fraud. Undeniable fraud. The kind of fraud even Cousin Buck on Facebook can no longer deny.

For starters, the analysis found at least 36 duplicate tally sheets in the county’s hand audit, which added 4,255 illicit votes to the count. That’s including 3390 extra votes for Biden, 865 for Trump and 43 for libertarian Jo Jorgenson.  Meaning, just through this alone, Biden picked up 2,545 votes on Trump.

If that’s not bad enough …

VoterGA found visual proof that ballot tallies were deliberately changed to steal votes from Trump and libertarian Jo Jorgenson to give to Biden. According to the statement from VoterGA, “The VoterGA team found 7 falsified audit tally sheets containing fabricated vote totals for their respective batches.” (emphasis theirs)

For example, one batch shows an actual ballot image vote total of 59 for Biden, 42 for Trump, zero for Jorgenson.  However, the votes were tallied 100 for Biden, zero for Trump. Hear that, Cousin Buck?

Put that in plain English. Somebody deliberately took all of Trump’s votes and all of Jorgenson’s votes in those particular batches and gave them to Biden. They then added on an extra 100 or so for the old guy.

The VoterGA analysis showed 923 out of 1539 mail-in ballot batch files:

contained votes incorrectly reported in Fulton’s official November 3rd 2020 results. These inaccuracies are due to discrepancies in votes for Donald Trump, Joe Biden and total votes cast compared to their reported audit totals for respected batches. Thus, the error reporting rate in Fulton’s hand count audit is a whopping 60%. (emphasis theirs)

That alone means the official results in Fulton County … and thus Georgia … are rubbish.

A Host of Other Horrors

Then there are the missing tally sheets, chain of custody fiascos that by law should have disqualified thousands of ballots, and other issues noted by VoterGA.

This is separate from the 10.5K to 30,000 illegal ballots from people who voted in the wrong county uncovered this week.

Or the “five sequential batches of absentee votes [that] each appeared with the exact same vote count of 392 for Biden, 96 for President Donald Trump, and 3 for Libertarian Jo Jorgensen, a count that state officials admitted was a statistical impossibility.” John Solomon reported on that last month.

We haven’t even touched on the allegations of pristine ballots that appeared to be machine generated, the mysterious vote dumps coinciding with Fulton County officials lying about a water main leak that send GOP and media observers packing, witnesses attesting to all military ballots she saw in Fulton County going to Biden, underage voters, illegal immigrants voting. Non-existent rejection rates of ballots.

To say nothing of the extraordinary percentage of ballots that were adjudicated in Fulton County, potentially allowing partisan workers the opportunity to “fix” the ballots to their liking.

We learned from election supervisor Misty Martin in Coffee County, Georgia how easy that is.

So how did VoterGA get to this point anyway? Because one judge had the guts to actually look at the evidence.

After months of fighting and throwing up every legal challenge imaginable, the county was finally forced in April by Judge Brian Amero to hand over digital images of all the county’s mail-in ballots.

This allowed VoterGA to compare ballots to tallies. Their work continues. After getting a whiff of what VoterGA had found, Judge Amero granted VoterGA’s request to hand examine the county’s mail-in ballots. Democrats and Fulton County officials tried to thwart that effort as well, filing a mess of motions. Police also ignored Amero’s order to guard the building holding the ballots 24/7.  Twice the building was broken into.

Judge Amero rejected the motions and gave the okay for this next step in the forensic audit to go forward.

You want to check for yourself to confirm what VoterGA found? They’ve posted the information.

Biden Talks Voting Issues in Philadelphia, as Fmr. US Attorney Claims Bill Barr Stopped Him From Pursuing Election Fraud There

Meanwhile, at the same time this evidence was presenting showing two ways Biden directly benefited from fraud in Georgia, POTUS made a rare escape from the White House to go to Philadelphia. His task? Bemoan efforts to strengthen voter integrity, and counter efforts by state Republicans to audit the November elections.

The Biden visit comes in the wake of a remarkable assertion by former U.S. Attorney William M. McSwain. McSwain claims in a letter to Trump that he was eager to investigate the vast array of election irregularities and misbehavior in November, but was blocked by former Attorney General William Barr.

McSwain says Barr ordered him to leave the matter to the State Attorney General Josh Shapiro. That’s like giving your stash of coke to Hunter Biden for safe keeping. Shapiro is the Soros-funded radical progressive who declared before the election that there was absolutely no way Biden would lose the state. Expecting him to investigate is like expecting Joe Biden to pass up chocolate chip ice cream on a summer afternoon.

(Update: Barr denies the charge. He tells Politico, “[The letter is] written to make it seem like I gave him a directive. I never told him not to investigate anything.” No, but telling him to pass anything serious he finds onto a local partisan hack who would definite not pursue it, is as much as saying “don’t bother.”)

In a statement Tuesday, Trump blasted the corruption in Philly and called on Joe Biden to support efforts to audit the state’s election.

Joe should say go forward with this, with all of these audits. His visit is a joke. He doesn’t need to visit, all he needs to do is let them do an audit and find out what happened. Who knows, maybe they’ll say the election was on the up and up, but many people would be shocked. Let the audit go forward like it is in Arizona, despite 107 Democrat lawyers trying to stop it and failing.

Let the Forensic Audit go, Joe. Don’t fight it. Show them how honest it was.

But as the news out of Georgia today shows, they can’t. They simply can’t.