The Mayflower Compact is a quintessentially American story, and the philosophical wellspring from which the United States sprung. 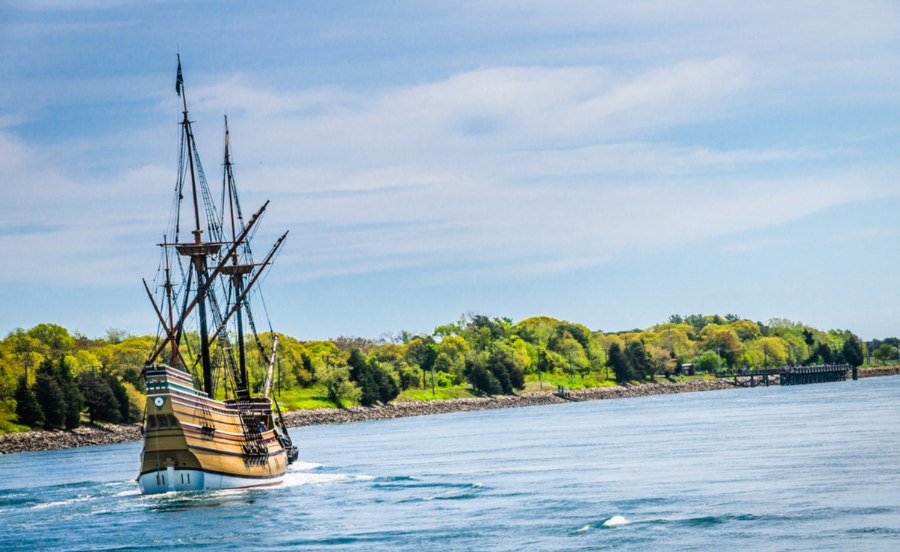 Editor’s note: This article was first published on November 9 at FEE.org. We thought it meaningful to share again today. Happy Thanksgiving!

For the 102 English people aboard the Mayflower, this very week four centuries ago was one they would never forget.

After more than 65 days on a perilous, storm-tossed journey at sea, they sighted land (Cape Cod) on November 9, 1620. They dropped anchor on November 11. In between, they produced a document to establish what historian Rebecca Fraser describes as “the first experiment in consensual government in Western history between individuals with one another, and not with a monarch.”

It is no exaggeration to say that the great American experiment — the achievement of self-government, rule of law and enlightened liberty for all — began not in 1776 but in 1620.

We recognize that 200-word statement today as the Mayflower Compact. Its quadricentennial should be noted and appreciated by freedom-lovers everywhere.

Government Between the Puritans and the Strangers: No King

Fraser’s observation is an important one. Previous statements and declarations in which freedom was a factor were agreements between an aggrieved people and the king or queen who ruled them. Magna Carta, for example, created a new relationship between English nobles and King John in 1215.

The Mayflower Compact, however, had nothing directly to do with the State. It was a private contract between the men among the Pilgrims and the men among the other half of the passengers, called “strangers” by the Pilgrims because they were placed on the ship by the sponsors in Britain to provide necessary skills to help the new colony succeed.

During the voyage, tensions between the Pilgrims and the strangers grew. When storms blew the ship off course and it became obvious they would land well north of Virginia, the strangers nearly mutinied. They argued that the wrong destination voided their agreement to assist the colony.

Government By the Consent of the Governed

Compelled by circumstances (survival hung in the balance) to settle the issue one way or another, the passengers did the adult and civil thing. They put in writing a promise to each other to form a government of consent. Its laws would bind them all without religious or political discrimination. True to the longstanding customs of the day, women could not sign such a legal document but no evidence exists to suggest that if they could, they would have rejected it.

This short video from PBS provides some context:

Philosophers debate the legitimacy of the idea of a “social contract.” It is routinely taught in school these days that we are all bound by one, and that it demands our subservience to government. Personally, I cannot recall ever receiving my copy, let alone signing it. But if such a thing truly exists, the Mayflower Compact surely comes closest to its ideal. No one on the ship was compelled to sign, and the few who chose not to were either too ill to do so or were sailors intending to return to England.

What made the document truly extraordinary was that it applied to a group of people who were three thousand miles from their mother country. The physical reality of all that space — and all the terror, freedom and insularity it fostered — informed everything that occurred in the days and years ahead.

In the end, the Mayflower Compact represented a remarkable act of coolheaded and pragmatic resolve … [T]hey put pen to paper and created a document that ranks with the Declaration of Independence and the United States Constitution as a seminal American text.

The passengers then elected a Governor and went ashore on November 11. A month later, after some exploration, they opted to sail west to set up their permanent home, which they named Plymouth. Fortuitously, if not miraculously, friendly Indians whose names we should honor — Massasoit and Squanto in particular — helped the colony get through rough times. And the colonists learned an important lesson in economics early on when they rejected the starvation policy of communal socialism and embraced private property.

Rebecca Fraser, The Mayflower: The Families, the Voyage, and the Founding of America

Peter W. Wood, America Wasn’t Founded on Slavery in 1619, But on Pilgrims’ Ideals Written in 1620

Sarah Pruitt, How the Mayflower Compact Laid a Foundation for American Democracy

Self-Government, Rule of Law and Enlightened Liberty for All

Personally, I love this story because it is so quintessentially American, so sublimely pro-liberty. Why? Let me summarize:

The Pilgrims fled religious persecution at the hands of a government. They made a deal with investors to privately finance a new settlement across the ocean. Half of the passengers on their ship did not share their religious views but together, the Pilgrims and “the strangers” put their differences aside and signed a social contract to establish a secular self-government. Then they made a peace with the local tribes that lasted half a century. They succeeded and prospered when freedom of enterprise and personal initiative formed the central bedrock of their new society.

In 1776, the American Declaration of Independence asserted that “all men are created equal” and that to secure their unalienable rights, “Governments are instituted among men, deriving their just powers from the consent of the governed.”

To Americans who remembered the Mayflower Compact, this was a glorious echo from a century and a half before.

It is no exaggeration to say that the great American experiment — the achievement of self-government, rule of law and enlightened liberty for all — began not in 1776 but in 1620. We are still on that same voyage and though occasional storms block and even set us back, we remain committed to the ideal.

That, I believe, is what it really means to be an American.

Lawrence W. (“Larry”) Reed is FEE’s President Emeritus, Humphreys Family Senior Fellow, and Ron Manners Global Ambassador for Liberty. Reed served as president of FEE from 2008-2019 after serving previously as chairman of its board of trustees in the 1990s and both writing and speaking for FEE since the late 1970s. Prior to becoming FEE’s president, he served for 21 years as president of the Mackinac Center for Public Policy in Midland, Michigan, and taught economics full-time from 1977 to 1984 at Northwood University in Michigan.