The Lynching Never Ends: Why the War Against Clarence and Ginni Thomas Makes No Sense 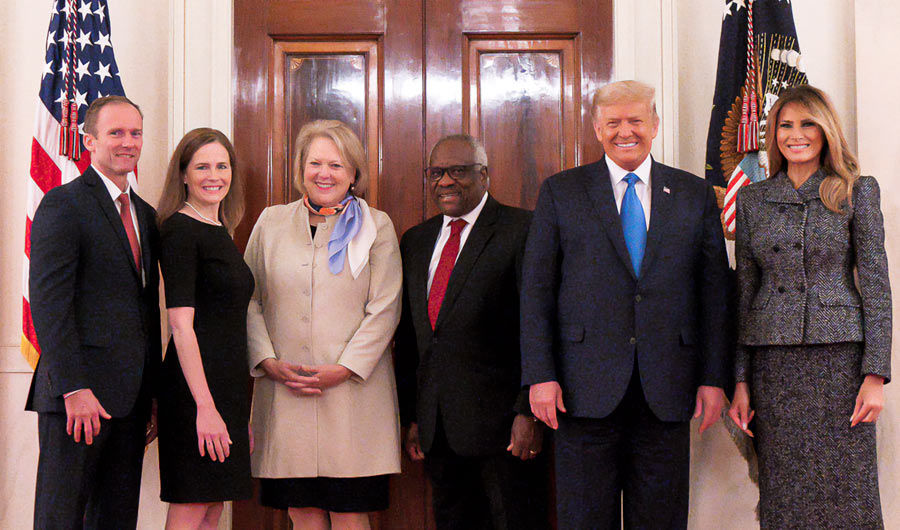 Last week, The Washington Post and CBS obtained 29 emails between Virginia (Ginni) Thomas, wife of Justice Clarence Thomas, and Mark Meadows, then Chief of Staff of the Trump administration. The emails were written in the weeks following the 2020 election.

After Biden was projected the winner, Thomas wrote, “Help This Great President stand firm, Mark!!! … You are the leader, with him, who is standing for America’s constitutional governance at the precipice.”

The Washington Post suggested the messages were a “strategy to overturn the election results.” Thomas has even been called a “radical insurrectionist.” A Yahoo! News headline read: “Clarence Thomas’ wife linked to Jan. 6 insurrection organizers.” And yet, one of Thomas’ messages to Meadows was, “Those who attacked the Capitol are not representative of our great teams of patriots for DJT!!”

None of her messages referenced Justice Thomas or the Supreme Court.

Ginni Thomas is an American citizen and has every right to have political opinions.

Those liberals must have recently had amazing Damascus Road experiences. Suddenly a light shone around them, and falling to the ground, they heard a voice, “Why are you not persecuting families of prominent decision makers in D.C.? Rise and enter into Washington, and you will be told what you are to do.”

All in the Family

Before their incredible “conversion,” Democrats paid no attention to family ties. I’m old enough to remember all the way back to 2020 when they not only looked the other way in the Hunter Biden controversy, but also protected the Bidens. And this was the son of a candidate for President of the United States, who received huge amounts of money from China, Russia, and Ukraine.

The New York Post initially cited a trove of emails revealing Hunter’s nefarious dealings. Later, Miranda Devine wrote the book, Laptop from Hell: Hunter Biden, Big Tech, and the Dirty Secrets the President Tried to Hide. Hunter was getting a $10 million annual fee from a Chinese billionaire for “introductions alone.” In a separate deal with China’s largest energy company, there was a mention of “10 held by H for the big guy.” Wow. They were so creative. Who in the world could “the big guy” be?

Senate Republicans revealed that Hunter received a $3.5 million wire transfer from Elena Baturina, the richest woman in Russia and widow of the former mayor of Moscow.

It was also revealed that an advisor from Burisma, a Ukrainian energy company, thanked Hunter for inviting him to meet his father. Oh, yeah, and they were paying Hunter $83,333 per month to sit on their board (with zero experience in the energy field).

It’s Not Nepotism When Democrats Do It

And then, there’s Nellie Ohr, wife of Associate Deputy AG, Bruce Ohr, who worked for Fusion GPS. That was the firm hired by the DNC and the Hillary Clinton campaign for “opposition research,” AKA digging up dirt on Trump (whether it existed or not), which evolved into the fake Steele Dossier. There are 339 pages of emails obtained by Judicial Watch from the DOJ under the Freedom of Information Act, which clearly show that Ohr sent reams of intelligence to her husband.

Martin Ginsburg (who died in 2010), husband of Ruth Bader, was rather political. Ginsburg’s firm had represented Ross Perot in a case, and they became close friends. After Jimmy Carter nominated his wife to the U.S. Court of Appeals for the D.C. Circuit in 1980, Ginsburg reached out to Perot and other influential friends to assure her Senate confirmation.

Ginsburg was a law professor at Georgetown University and a tax lawyer, specializing in federal tax law. And yet RBG decided major tax opinions during her tenure as a Supreme Court Justice while Martin was still alive. These included Barclays Bank PLC v. Franchise Tax Board (1994), Oklahoma Tax Commissioner v. Chickasaw Nation (1995), United States v. Cleveland Indians Baseball Co. (2001), and Drye v. United States (1999). Don’t you think she could have been influenced by her husband, who was an expert on federal tax laws? Maybe. But nobody cared.

And remember “Hillary Care,” a 1993 healthcare reform package? You want to talk about influence from a spouse? Hillary actually headed it up. We’re not talking about Lady Bird Johnson’s highway beautification or Nancy Reagan’s “Just Say No to Drugs” initiative. We’re talking health care, one of the most important policies in our country, delegated to a president’s wife.

My Personal Encounter With the Thomases

I had the incredible honor of meeting Justice Thomas and his lovely wife, Ginni, in 2010. I was an airline pilot at the time, and they were on one of my flights from Washington Dulles (IAD) to Dallas/Fort Worth (DFW). The agent in IAD had told us they were on-board, so when we got to the gate in DFW, I got off as quickly as I could to watch for them on the jet bridge.

When I saw Justice Thomas get off the aircraft, I fell in alongside him, and as we walked up the jet bridge — at the usual fast pace after being trapped in a tube for several hours — I introduced myself and told him that I wanted the honor of meeting him. I expected a quick half-turn of his head with maybe a half-smile and a quick hand shake, while keeping up the fast pace. I was in complete awe to see him stop in his tracks (despite the “stampede” behind us), put down his briefcase, turn his entire body toward me, look me right in the eyes, and with a warm smile tell me it was his pleasure.

He then introduced me to his wife, Ginni. She seemed like such a sweet, humble, and gracious woman. This was right after she had been in the news for extending an olive branch to Anita Hill by voicemail. There was a controversy amongst pundits at the time on whether she was genuinely trying to reach out, or opening up a wound all over again. I remember when I first looked at her face-to-face, I immediately thought, “Definitely an olive branch.”

And the Two Shall Become One

Look, a husband and wife should be a very close duo, as designed by God. And most individuals holding any position of authority — even presidents or Supreme Court Justices — will have opportunities to be influenced by their spouses (whether it’s intentional or not). But at the end of the day, their decisions don’t have to reflect that influence. They should be able to exercise good judgment, free from personal bias. Pilate’s wife told him, “Have nothing to do with that just Man (Jesus), for I have suffered many things today in a dream because of Him.” But Pilate released Barabbas anyway.

Ginni Thomas is an American citizen and has every right to have political opinions. And under the Electoral Count Act of 1887, questions about an election can be raised through a standard process. By the way, that same process was used by Democrat Representatives Jamie Raskin in 2017 and Corrine Brown in 2020. But I guess those memories were also “cleansed” on the Damascus Road.