The Little-Noticed Horror in the Charlie Gard Case 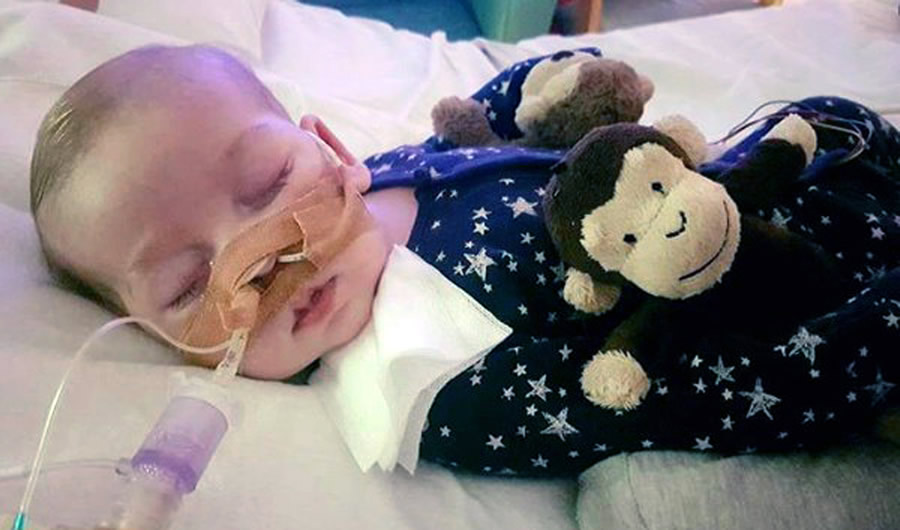 Charlie Gard’s life will offer him “no benefit” if he lives, according to a member of his hospital’s legal team. If he gets the treatment his parents are seeking — and if it works — it would bring him such “significant harm,” it would be “inhuman to permit that condition to continue.” And that’s why his doctors and the court ruling on his life’s worth want him to die.

As Americans wonder how a court in England has the power to decide whether a baby’s parents can get him medical treatment, and as the President and the Pope have weighed in as well, there’s an aspect to the Charlie Gard case that is getting far too little attention. It is unnerving, it is disturbing, and it must be addressed, since it is part of a larger attitude that is incredibly dangerous.

“The Best Thing We Can Do Is Terminate Them”

In short, it is the attitude that some humans do not have the right to live because others deem their existence too difficult or painful or burdensome or pointless. And since they are considered unworthy or unproductive or unnecessary, the best thing we can do is terminate them.

“There is significant harm if what the parents want for Charlie comes into effect,” according to hospital legal team member Katie Gollop. “The significant harm is a condition of existence which is offering the child no benefit.” And, she added, “It is inhuman to permit that condition to continue.”

In other words, it is inhuman for Charlie’s parents to try to save his life – or at the least, extend his life – if he might end up in a “condition of existence” that Ms. Gollop (or the courts) deem to be of “no benefit” to the child.

Who else might fall into that category? Other handicapped children? The elderly with severe dementia? The mentally ill? What other “conditions of existence” should be terminated as well?

In 2015, it was reported that “650 babies died under Holland’s assisted suicide law [in 2013] because their parents or doctors deemed their suffering too difficult to bear.”

The report at LifeSite News continues, “Although the law was designed to help terminally ill patients have a dignified death, the right to die has also been granted to a growing number of people who are physically healthy but have psychological problems. Official figures show that 13 patients suffering from mental illness were euthanized in 2011; by 2013 this number had risen to 42 patients.”

As many as 650 babies are killed by doctors in the Netherlands each year.

The article goes on to say, “And it is not just adults who are being euthanized. According to the Royal Dutch Medical Association, as many as 650 babies are killed by doctors each year because they are deemed to be in pain or facing a life of suffering.”

Read those words again. They are tragic regardless of cause or rationale: “as many as 650 babies are killed by doctors each year.”

To be clear, I do not want to minimize the agony involved in some of these decisions. Many of the cases involved unimaginable suffering for families and individuals, and the choices they made were far from easy.

“Comfortable” With Aiming at Infants’ Death

So, I’m not sitting here as their judge and jury. They answer to a perfectly just God who is also perfectly compassionate.

The moment we take the life of someone whose existence we deem unworthy or unproductive or unnecessary, we are already well down a perilous, slippery slope.

But what I can say is this: The moment we take the life of someone whose existence we deem unworthy or unproductive or unnecessary, we are already well down a perilous, slippery slope.

As Catholic professor Charles C. Camosy noted, “The ‘quality of life’ and ‘benefit from continued life’ judgments being made in the Charlie Gard case have little or nothing to do with the burden of the baby’s artificial ventilation. No, if Charlie started breathing again after ventilation was removed, the judge would not be pleased with the outcome. He, along with many others, have explicitly made the judgment that Charlie’s life overall is not worth living.”

Camosy closed his article with “a worry about where this kind of reasoning is already leading us. Secular medical ethics,” he stated, “is becoming more and more comfortable with directly aiming at the death of infants like Charlie. Indeed, the Journal of Medical Ethics held an ‘infanticide symposium’ back in 2013; the title they used for the special journal issue? ‘Abortion, Infanticide, and Allowing Babies to Die.’”

Where Else Will This Lead?

Really now, if unwanted babies can be terminated in the womb and babies with too-severe conditions can be terminated outside the womb, why can’t a host of others be terminated, from the youngest to the oldest? If it’s OK to let certain babies die, why not take their lives directly?

Or to approach this from a different angle, did the Nazis perpetrate the Holocaust out of thin air, or did they take incremental steps along the way, first deeming other groups unworthy of life?

Writing for Newsweek in 2015, Dustin Ross observed that, “The Dutch can now choose death if they’re tired of living.” What happens when they decide that others are tired of living, especially those who can’t speak for themselves?

One of my closest friends has a grandchild named Jude who suffers from a highly unusual, almost always fatal condition. He nearly died in the womb and has nearly died numerous times in his three years of life so far, with health crises and emergencies and medical interventions being the norm.

It Is the Battle for All of Us

Jude can smile (which he often does) but can’t say any words, and he cannot move on his own. He remains the size of an infant, totally dependent on his family and nurses and doctors.

Yet he has brought incredible joy to his parents and grandparents, all of whom say he is the greatest blessing God has ever given them. And he has changed the lives of thousands of others, including mothers who were about to have an abortion but decided against it after hearing his story, and Christians who had turned away from God but returned to the faith after encountering Jude.

I fear that some judges in England and some doctors in Holland would deem Jude’s “condition of existence” to be of “no benefit” to this dependent child. In response I can only say: Woe be to the world when such thinking becomes the norm. You or I might be the next on the list.