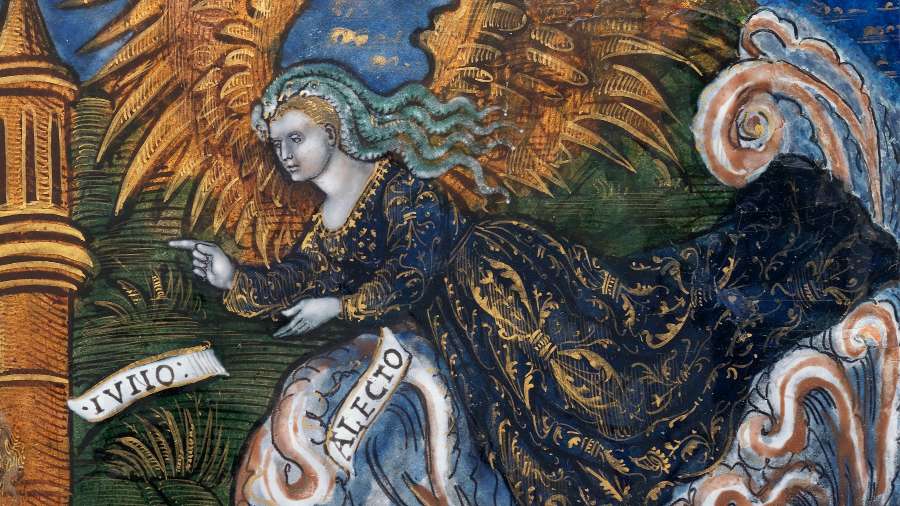 Alecto is a Fury. From ancient Greece, that is. She has snakes for hair, and blood drips from her eyes. Her superpower is fanning mortals into deadly strife. When refugees from the fallen city of Troy tried to form an alliance by marriage with Latins, says Virgil, Alecto possessed the Latin queen and led the women to riot by spewing false charges against the Trojans, and getting the Trojans to kill a beloved pet deer.

Alecto is neither a scientist nor a careful historian. She may appeal to justice, truth, common sense, or “anti-racism” (her new slogan), but if those lines don’t work, she maddens mortal blood directly. Last year, African Americans were the deer in whose name she fomented violence (never mind if they turned up collateral damage in the process, as murder rates soared). This year, she’s going after the Asian-American community, to keep them from forming an alliance with the enemy.

The fury works for the DNC, now, as a liaison between Nancy Pelosi and the Media. She gets most of her new talking points from Robin DiAngelo and Ibram Kendi, though her cell is also on speed-dial to Karl Marx and Bacchus, the Greco-Roman god of madness, pogroms, lynching, and witch hunts.

If the American Left Were Truly Concerned About Justice…

Last summer, Alecto and her sisters Tisiphone and Megaera went into action across America. A man in Minneapolis died in police custody, whether choked or overdosed. Were the American Left in its right mind and truly concerned about justice, they would have tried to figure that out before demonstrating against “systemic police racism.” They would have asked questions like, “Why did George Floyd die?” “Is there anything we can do to stop drug abuse, which is ruining millions of lives that it does not completely end?” “How often do police kill unarmed suspects?” “What would happen to this town if we shamed and emasculated the police?” “How many thousands are killed by doctors or foolish politicians — or abused by teachers — for every innocent person killed by police?”

Never mind that neither the police nor the FBI found evidence that Robert Long killed for racial reasons.

But America asked no such questions, because furies don’t care about justice or reason. Nor do they mind that our leaders are spending America into oblivion, letting floods of unskilled, in some cases criminal, young men from Central America across our borders, or that the murder rate rose in American cities by double digits last year. Alecto loves it. If Chauvin is found “not guilty,” more hell will be to pay in cities ruled by Democratic mayors.

Now Alecto has snapped her fingers and said “Racism” again, and those under her spell are mouthing her slogans across America: politicians, school officials, even ministers of the Gospel.

A young sex addict in Atlanta shot nine people. Two were white and one Hispanic, but never mind them. “Trump drummed up animosity against Asian Americans,” Alecto whispers, and my governor, Jay Inslee, repeats these sentiments at press conferences. It’s all because Trump called COVID “China flu”!

Never mind that neither the police nor the FBI found evidence that Robert Long killed for racial reasons. Never mind that many attacks on Asians in America are carried out by ethnic groups that seldom belong to the Trump Coalition. A chorus rang out on all sides, “Racism!” “White supremacy!” “Asian Lives Matter!”

The furies may not be good scientists, but they are savvy politicians. Despite the madness they spread, they are as calculating as the lower depths of Screwtape’s hell. They know where power lies.

Some African-Americans and Hispanics seemed to have had enough of the Democratic Party. And Kendi is calling for “anti-racist” measures to bring about “equity,” and institution after institution are heeding his call. Asians are beginning to realize what that means. (The fact of left-wing racial discrimination is well-known among educators whom I have worked with to get qualified students into top schools.) It means top universities are set to discriminate against them even more than they already do. It means HR is going to pick people by skin color, and count their own acts of blatant racial discrimination as a virtue.

Might Asian Americans be thinking of leaving the Democratic Party? Time for Alecto to whisper “white supremacy” in peoples’ ears.

If a drug addict in Minnesota, or masseuse in Georgia, dies in a tragic manner, that is excuse enough to set armies of activists marching. The school district where our children (who are themselves Asian American) studied thus sent out a mass email announcing, without any evidence, that the murders in Atlanta were about “racism,” and pushing Alecto’s divisive narrative by reciting historical white sins. (Never mind what redlining had to do with recent Korean immigrants!) An “insurrection” in the Capitol justified 30,000 troops and barbed wire. Who knows what a mad gunman in Atlanta will justify, to scare Asian Americans back into the Democratic fold?

The Real Source of Violent Animosity in America

The devil sends his minions into the world in pairs. Communist revolutionaries proselytized a young Adolf Hitler at a work site in Vienna, then (he says) tried to shove him off the scaffold. Adolf hated their international ideals, but deliberately emulated their violence. Likewise, right-wing rioters on January 6th mimicked BLM and Antifa mob actions over the previous eight months. That, not plain talk about the crimes and threat of the Chinese Communist regime, is the real source of violent animosity in America.

Spit your venom on someone else, Alecto. We know your game.

Back to Hades with you, where the fire will fry your cell phone and Nancy Pelosi will have to speed-dial some other demon when she needs a favor.