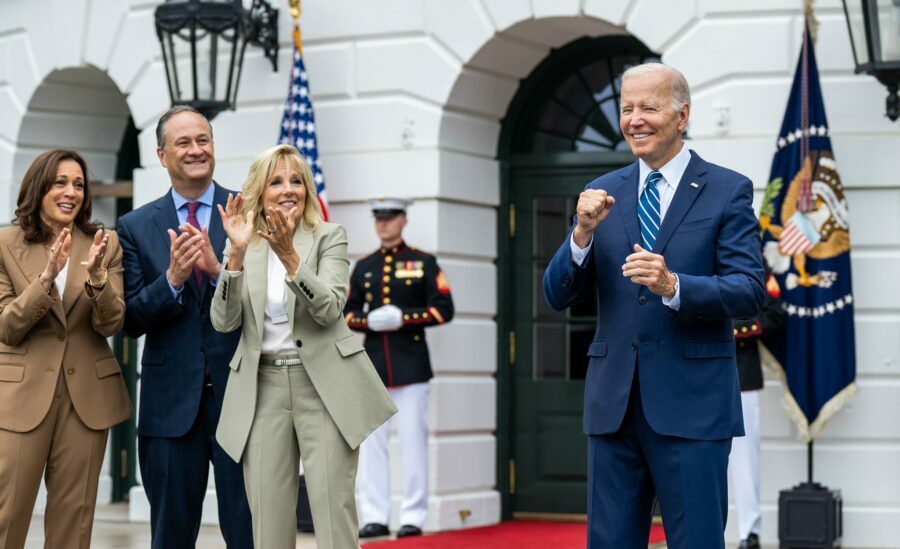 Photos that beg for a caption.

It’s Monday, and your Brew is piping hot!

Stunning Accusation:  Biden is Like a “Small Child,” Has to Be Hopped Up on Pills Before Public Appearances

However obvious the story, it’s still stunning. On Friday night, Tucker Carlson reported that before public events Joe Biden has to be pilled up to (barely) hide the ravages of dementia. He cited a witness who personally saw the drugs administered several times.

Now before taking the medication, this person said Biden was, quote, “like a small child”. “You could not communicate with him. He changed completely because he was on drugs and he clearly still is on drugs.

The “small child” reference is no surprise. Even when hopped up, Biden is always using phrases like “I’m not allowed,” and “they’ll be mad if I … .” We also have those note cards, which spell out instructions for Biden as if he were a five year old. “YOU sit in YOUR Seat.” And when you are answering to the Easter Bunny, well …

Even the drugs can’t hide the dementia. On Thursday, Biden once again tried to shake the hand of someone who wasn’t there.

"His fitness, his vigor, is beyond question."

He did the same thing in April, with the media insisting he was gesturing. Unfortunately, the world knows better.

Who’s allowing this? According to Carlson, the administering of the drugs by White House staff is overseen by Biden’s wife, “Dr. Jill” Biden. This is not the act of a loving spouse helping her husband with diminished capacity get through the day. The point is to fool the American people while maintaining power. Two words for that: “Spousal Abuse.”

Meanwhile, Biden is getting heat for fist-bumping Saudi crown prince Mohammed bin Salman. Look at the bright side. At least the crown prince was actually there.

Joe Biden’s effort to let men hang out in girls’ locker rooms or compete in women’s sports has been shot down by a federal judge, at least temporarily. The Biden directive allowed transgender workers and students use school bathrooms matching their professed gender identity. And to compete on the sports team of their choosing.

20 states sued, arguing the directive prevented states from enforcing their own laws against transgender bathroom use, and banning males from competing against females.

Oklahoma Attorney General John O’Connor, one of the plaintiffs, said the ruling “is a major victory for women’s sports, and for the privacy and safety of girls and women in their school bathrooms and locker rooms.”

Transgender “Woman” of the Year

In a slap to every female athlete at their school, the University of Pennsylvania has nominated biologically male swimmer Lia Thomas as NCAA’s “Woman of the Year.” Because nothing says “grit, skill and grace” like leaving the men’s team and hopping into the women’s events to use your massive biological advantages to crush the girls. Then having the nerve to compare yourself to Jackie Robinson.

Tennis legend Martina Navratilova joined the outrage, tweeting, “Not enough fabulous biological women athletes, NCAA?!? What is wrong with you?!!!!!!!?”

I Know It’s the French, But Still …

America’s representatives at the French Ambassador’s residence this week. pic.twitter.com/4QpjSiuMBw

Not quite Jefferson and Franklin, is it?

Stream co-founder Jay Richards had the line of the weekend.

I object to the teal colored shoes with the dark blue dress. https://t.co/0qXvlCSGIs

Time to play “I Thought That Was a Conspiracy Theory!”  You know the rules. You say something about COVID, or COVID vaccines, or the 2020 Election. You’re labeled a crazy conspiracy theorist. You get suspended from Twitter. A year later, the mainstream media tweets out a news story confirming what you were saying.

A study found that 42% of people with regular menstrual cycles said they bled more heavily than usual after their Covid vaccination. https://t.co/mEspNV8ctO

Actually, this tweet is a two-fer. It’s also today’s entry in “Just How Woke and Ridiculous is the Media?” Rep. Lauren Boebert picked up on it:

The word you’re looking for is WOMEN, @NBCNews. https://t.co/7JsY79JuoR

Know Her Name: Pamela Hemphill. 60 Days in Prison for Doing What Colbert Staff Did, Unpunished

69-year-old breast cancer patient Pamela Hemphill arrived at the Federal Dublin Prison Thursday to begin serving her 60-day sentence. Her heinous act? On January 6, the MAGA-loving granny entered the Capitol building and  …. um … well … um. That’s it. She took the 60-day sentence as part of a plea deal rather than risk the 10 years she could have gotten.

Jan 6th defendant Pamela Hemphill arriving at FCI Dublin Prison in CA to start serving her 60 day sentence as part of her plea deal with DOJ. Her last words …”God is with me”

You feel any safer knowing she's locked up?

Stephen Colbert’s staffers illegally trespassed after hours, after being warned earlier to leave, and harassed conservative lawmakers. What sentence did they get? Having to work on a failing late night show.

Did Hemphill urge people for two days to storm the Capitol? No. Ray Epps did. And what did he get? Arrested? Solitary confinement? Two months in the slammer? No. All he got was a lovey-dovey profile in the New York Times.

Is AOC Accusing Pelosi of a J6 Cover-Up?

By the way, AOC admitted last week that … well, more like whined about how … U.S. Capitol police were “opening the doors wide” for protesters on January 6. She claims they were “supporting” the people who breached the building. Then she put on her tin hat: “But then everyone decided it was too politically risky to investigate thoroughly, so they brushed it under the rug.”

Is AOC accusing Pelosi, DOJ and J6 of ignoring conspirators in the so-called “insurrection”? As grandmas do hard time for simply walking in the building?

Or is she unwittingly admitting that if Pelosi, the J6 witch hunt and DOJ actually looked at Capitol Police treating the protesters as average citizens coming to the People’s House, they can’t accuse the protesters of being domestic terrorists who “breached” the Capitol?

One of the most chilling and fascinating articles to come down in a while. The actual history of Margaret Sanger’s lays bare the direct connection between abortion and the occult and child sacrifice. John Zmirak latest is a must share.