The Brew: Heroes and Villains and Lunch Dates 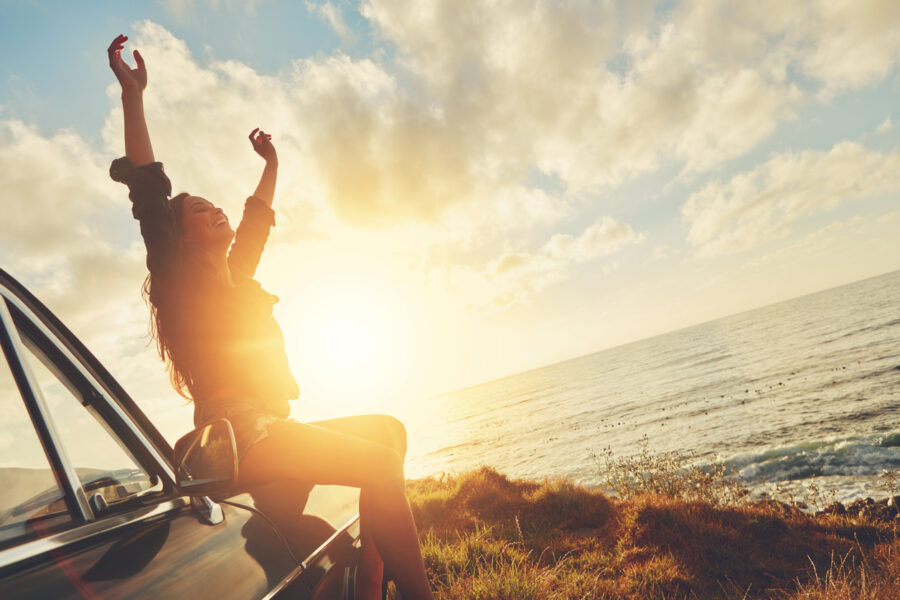 A lot to get to, but first a message from our sponsor.

A man walked into the food court of an Indiana shopping mall Sunday and opened fire. Three people were killed. The toll wasn’t catastrophically higher because a legally-armed citizen shot the killer dead before he could take more lives.

Amazingly, the Left is griping that Elisjsha Dickens, the citizen who ended the massacre, has been called a “Good Samaritan” by Greenwood Mayor Mark Myers and police chief James Ison. Let’s see: Helping a stranger who’s already been mugged versus protecting strangers from getting murdered. Are they suggesting Dickens should have waited until after they were shot to help out? Or are they just mad that he stopped more people from getting killed? That poured cold water over the Left’s gun narrative, you see.

Uvalde Report on Police Response Out

I can think of no event in recent memory that has more people shaking their head in confusion than the response of local police and other law enforcement on the scene of the Uvalde school massacre.

An investigation into the failed police response was released Sunday night, right on the tail of a massive amount of video detailing what did … or should we say didn’t … go on.

How in the world do you have that many heavily armed, heavily trained officers standing around as if they are waiting for Taylor Swift to emerge from a backstage door, instead of going after some punk who was shooting little children?

Stream contributor Timothy Furnish has studied the film and read the report. Please check out “Sheep and Lions at Uvalde.”

Swamp Mayor Complains About Illegal Immigrants in Her City

D.C. Mayor Muriel Bowser is complaining about illegal immigrants filling up the city’s homeless shelters. She blames Texas governor Greg Abbott, whom she says “tricked” the illegals into boarding buses heading to the Swamp. The town where no one in government is doing anything to protect the border. From illegals who have no problem at all violating our laws by crossing the border.

What’s Bowser have to complain about anyway? D.C. is a “sanctuary city.” Virtue signaling is all well and good, until people actually take you up on it, right, Mayor?

If you had a dime for every time you’ve been told — just during the J6 hearings — that the 2020 Election was the most secure election ever, you could afford a can of California gas.

The reality is quite the opposite.

John Solomon of Just the News has had his nose to the grindstone for 18 months, doing the work that the mainstream media — and for that matter, Liz Cheney — should have been doing. He’s now up to 21 different investigations that prove irregularities, illegalities and outright fraud. He’s collated them in a new article called “Bombshells Undercut ‘The Big Lie’.”

But you want to talk sedition and betrayal, Liz Cheney? Let’s do that.

Two New Tales of Treachery During the Trump Administration

Gen. Milley Remains Mum on Allegation He Made Subordinates Take an Oath to Ignore Trump Orders

Meanwhile, remember Bob Woodward’s claim in the book Peril that Chairman of the Joint Chiefs of Staff Mark Milley commanded subordinates to ignore orders from President Trump until they ran the orders by Milley first. In fact, according to the book, Milley made the subordinates swear an oath.

If true, this would mean Milley overthrew the civilian chain of command. Mutiny. Sedition. A coup.

Since the book came out, Republicans have been demanding Milley answer to those allegations. He ignored them for nine months, saying he hadn’t read the book. He ignored specific questions sent to him in April. Last week, Sen. Charles Grassley and Rep. Jim Banks took to the House and Senate floor.

Said Banks: “I’m calling on General Milley to set the record straight. General Milley is accused of secretly seizing the president’s military powers. That is the most serious crime. If he is innocent, he has a duty to say so.”

Said Grassley: “On April 11th, with twelve pointed questions, we gave General Milley a second bite of the apple to clear the air. General Milley, honor your word. Answer the questions. Come clean with the American people.”

Added Grassley: “Years of oversight have taught me this lesson: evasive answers usually offer revealing clues to the truth.”

Dr. Deborah Birx — aka “The COVID Lady With All The Scarves” — admits in her new book Silent Invasion that she hid vital information from President Trump to better push her preferred COVID response policies. She also altered CDC data.

“I couldn’t do anything that would reveal my true intention,” she writes “to use the travel ban as one brick in the construction of a larger wall of protective measures we needed to enact very soon.”

Birx knew she wanted a massive lockdown, but knowing Trump would resist because of the inevitable damage to the economy, she obfuscated her intentions. From that came the infamous 15 days to slow the spread deception, though she knew full well the lockdowns would last far longer.

She deceived the President of the United States — the man we elected to look after the nation as a whole.

As The Post Millennial reports, Birx was scornful of Trump’s efforts to protect the economy. In other words, utterly disinterested in the damage that would come from her lockdowns. The cure — as Trump correctly warned — became worse than the disease.

Metaxas and Peterson Meeting. Who Would You Have Lunch With?

Last week we came upon an intriguing Facebook post from Stream friend Eric Metaxas. Seems he got a chance to break bread with philosopher Jordan Peterson. While no doubt much of the conversation between these two fascinating figures was consumed with the (then-pending) nuptials of Ben Affleck and Jennifer Lopez, I’m sure some time was spent exchanging lofty thoughts. 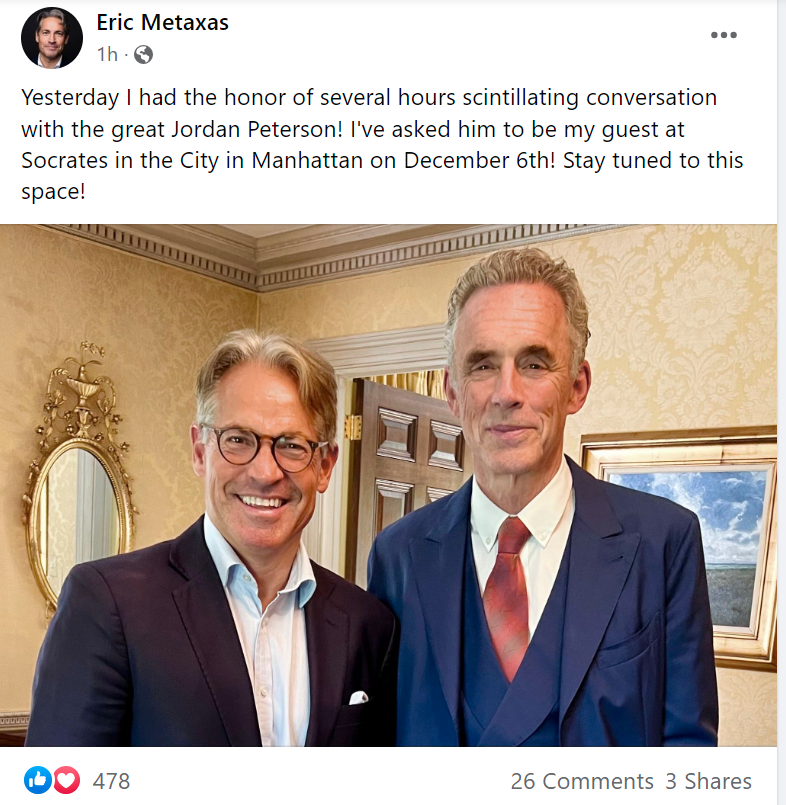 We’ll have to wait until December to hear Metaxas and Peterson bat around ideas the way the rest of us might bat around a beach ball.

But it got me thinking. Of all the people currently engaged in public discourse, who would you want to have lunch with? Both Metaxas and Peterson would be excellent choices. But whom would you pick?

I was going to say Trump, but then he might want to order in McDonalds, and I’m really trying to cut down.

Stream editor Tom Gilson with a fascinating deep dive into a familiar passage where Jesus is challenged by the Sadducees: The conclusion: “There’s No Denying It: Jesus Says Marriage is for Man and Woman Only.”