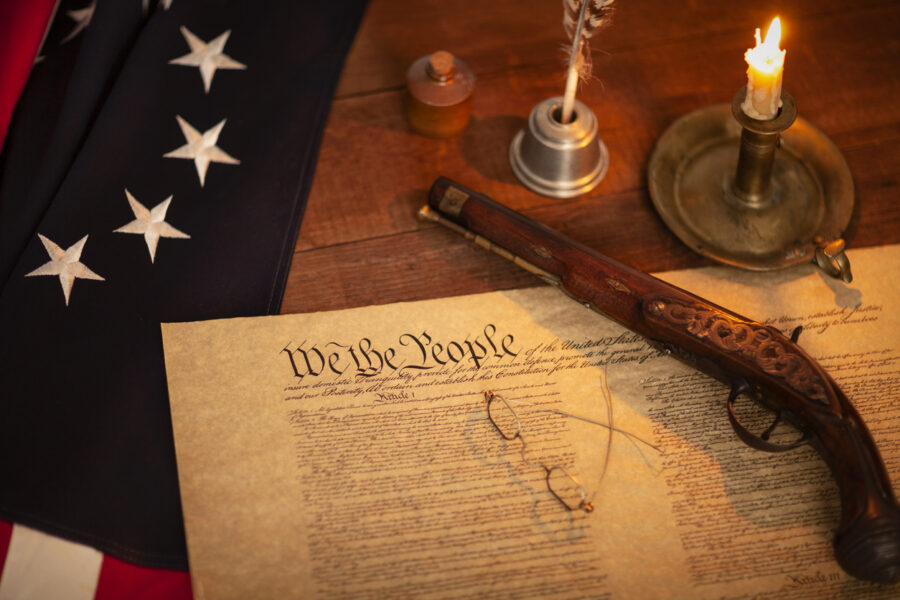 A big day for the 2nd Amendment yesterday.

In a landmark decision, the Supreme Court affirmed the 2nd Amendment is, in fact, still part of the Constitution. The Court struck down a New York law that made getting a concealed carry permit prohibitively difficult.

The Court’s ruling has far-reaching implications in the fight by the Left to take guns away from law-abiding Americans. For example, the “red flag” law just passed by the Senate as part of its gun control legislation? Might as well grab the Wite-Out, honorable gentlemen and ladies.

Naturally, the Left has gone bonkers over the decision. Particularly those who can afford their own security guards or have taxpayer funded protection. Take New York Gov. Kathy Hochul, whose hysterical response (as crime goes mad in her largest city) has gone viral:

I’m sorry this dark day has come, that we’re supposed to go back to what was in place since 1788 when the Constitution of the United States of America was ratified. And I would like to point out to the Supreme Court justices that the only weapons at the time were muskets. I’m prepared to go back to muskets.

And those muskets at Lexington and Concord, and all the way to Yorktown, threw off the yoke of tyranny being enforced by the most powerful army on the planet. (Perhaps the problem for leftists is that the colonists were successful.)

But amusingly, Monica Crowley pointed out that this same Kathy Hochul wailed a different tune about guns when it suited her politically.

“Hi @GovKathyHochul- remember when you were in Congress and proudly touted your ‘A’ rating from the NRA? Good times.”

I wonder. Is the Left going bananas because they’re really that concerned about restrictions on concealed carry? Or are they terrified the 6-3 vote signals the conservative court isn’t about to roll over for the mob, and Roe is indeed doomed?

John Zmirak, who’s been educating us all with his amazing series on the direct connection between the right to bear arms and religious liberty, has offered up a unique take on the decision in his “Supreme Court Issues Pro-Life Decision … on the Second Amendment.”

Hive insects. That is how leftists today, and with them RINO Republicans, really see you. So of course they want you defanged, passive, unable even to defend yourself against crime. But it’s not how God made you, or how you are meant to live. Thank the Lord our Supreme Court has resoundingly affirmed that.

Fear not, 2nd Amendment haters. The Administration will keep plugging away, making it increasingly difficult for citizens to protect themselves. For example, by targeting ammo. The White House is refusing to deny it has plans to halt civilian sales of excess ammo from the government’s Lake City, Missouri ammo plant. The plant has been making ammo for the Army since 1941, and selling the excess to John Q. Citizen. Will that soon stop? The White House ain’t denying it, as The Federalist reported Wednesday.

Another tactic? The government buying up ammo. Did you know the IRS, Railroad Retirement Board and other federal agencies are buying ammo as fraternities buy up beer?

Rep. Matt Gaetz says the IRS has bought $750,000 of ammo this year alone. Said Gaetz, “Call me old fashioned, but the heaviest artillery the IRS would need is a calculator.”

Woody Guthrie once sang “Some will rob you with a six gun. And some with a fountain pen.” Apparently, some will try to rob you with both.

Meanwhile, a new poll from the Trafalgar Group/Convention of States shows the public has caught on to the Left’s game plan. A majority of both Republicans and Independents think “red flag” gun laws have the potential to be abused by local authorities and government officials. Only 15% of Democrats are worried about abuse. It’s easy to understand why. Because taking guns away from people the Left doesn’t like is not “abuse.” It’s called a “perk of being in power.”

Federal prosecutors told a judge Wednesday that they want convicted child sex trafficker and Jeffrey Epstein partner Ghislaine Maxwell to serve between 30 and 55 years in prison.

Fine. Whatever. But names. We want names.

A sentencing hearing will be held Tuesday.

We’re still waiting on the names.

Jussie Smollett has given his first interview since being sentenced for lying to police in his hoax attack-slash-lynching. To refresh, he claimed that white dudes in MAGA hats attacked him, calling him racial and homophobic slurs … in the middle of a sub-zero Chicago night. Turns out he staged the thing with two Nigerian-born pals of his. Smollett admits in this new interview with “Sway in the Morning” that his infamous interview with ABC’s Robin Roberts was “performative in nature.”

So that’s what it’s called now. I can’t wait. “The J6 committee hearings aren’t a Soviet-style show trial,” Nancy Pelosi might say. “They are ‘performative in nature.'”

Speaking of Nancy, her husband Paul Pelosi has been charged with DUI causing injury in connection with his May 28 (alleged) drunk driving incident in Napa Valley. If convicted, he could face a minimum of five days in prison and five years probation.

Here’s a fun double header for ya. Dr. Michael Brown wrote “Trump Has Too Much Baggage” and the GOP should look to someone else in 2024. I countered with “I Beg to Differ, Dr. Brown. Trump Has a ‘Unique Set of Skills’.”

Which argument carries the day?

Meanwhile, here’s a huge head’s up. Fox News host Pete Hegseth had a wonderful chat with James and Betty Robison about faith, family and his new book on saving the education system called Battle for the American Mind. We will be posting that video Tuesday!