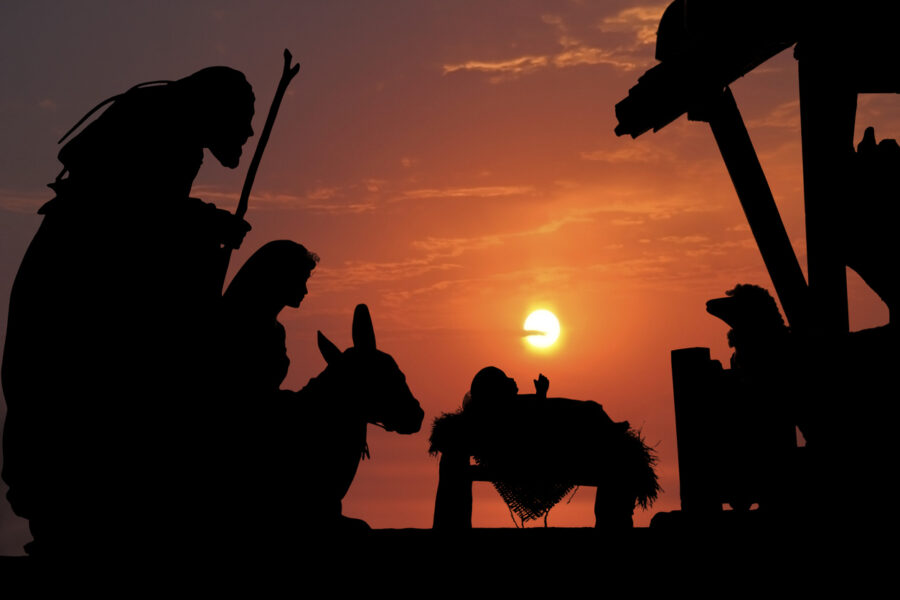 A lot’s going on, what with descendants of King David arriving in town to take part in the census ordered by Caesar Augustus. It’s a big news day for The Bethlehem Brew. So let’s get right to it.

Looking for a place to stay in Bethlehem? Fuggettaboudit. Crowds here for the census have the Inn booked to the max.

“You’d think with the price of feed straw going through the roof this year, you’d see fewer travelers,” one local resident remarked. “At this point we’ll be sticking new arrivals with the animals.”

Indeed, that is the case with Mary and Joseph, a young couple from Nazareth, who just completed the five-day journey on donkey despite Mary being on the verge of giving birth.

You think Roman soldiers are tough? They’ve got nothing on this girl Mary.

Please join us in praying for a safe delivery.

Local shepherds tending to their flocks claim to have been visited by an angel of the Lord during the night. Before you ask, there’s no evidence the lads have been drinking. Terrified at first by the celestial sight, the shepherds claim the angel told them, “Do not be afraid. I bring you good news that will cause great joy for all the people.”

What? The supply chain problems have been solved and market shelves will be loaded with goods? No, even better.

According to the angel, a savior — the Messiah himself — has been born right here in Bethlehem. Yeah. In Bethlehem. Sure, the prophet Micah said, “But you, Bethlehem Ephrathah, though you are small among the clans of Judah, out of you will come for me one who will be ruler over Israel, whose origins are from of old, from ancient times.” But really. Look around. Do you really think the Messiah would be born here?

The shepherds report we should be able to find this baby “wrapped in cloths and lying in a manger.”

The Sky’s Filled With Song and Light

Adding credence to the shepherd’s story, local residents report hearing what they describe as a “heavenly host” filling the air with song. Over and over, they sang: “Glory to God in the highest heaven, and on earth peace, good will toward men.”

Angels aren’t the only odd happenings in the sky. The massive star that’s appeared above town has locals gasping in wonder, and the learned debating its meaning.

Keep your eye out for magi from the east said to be on the hunt for this young king. According to sources in the palace, these magi went to Herod, and spoke of seeing a star rise signaling that a new king of Israel had been born.

Bad move. Given Herod’s ruthless treatment of those he sees as a threat, those magi might as well have painted a target on the child’s back. Whoever he is.

Herod asked his chief priests and scribes where the Christ was to be born. They, too, cited the words of the prophet Micah that this ruler would be born in Bethlehem. Herold told his flunkies to find the child so he, too, could worship him. If you believe that, I’ve got a bridge over the Jordan to sell you. “Let’s Go, Herod.”

And who are these Magi? We have conflicting reports. Some say they are from Persia, priests of Zoroastrianism. Others say they’re from nearby Arabian Nabataea.

Some jokesters are suggesting they’re actually three kings from the orient. That’ll make a nice song, but bad history.

But what these magi are bringing is no joke: gold, frankincense and myrrh.

Update: A Child is Born!!

The Bethlehem Brew can now confirm: The shepherds did indeed find the child lying in a manger just as the angel of the Lord had said. He is the son of the young bride Mary, and the child’s name is Jesus. No doubt by now you have come across these shepherds spreading word of Jesus’ birth around town and you share in their amazement. “Newborn King” is now trending.

The magi also have arrived in Bethlehem, found the young Jesus, and bowed down to worship him. Afterwards, the magi were heard to say they will not be returning to Herod, having been warned to stay away in a dream.

Mary’s husband Joseph was also reportedly warned in a dream about Herod’s intentions. We will not reveal where the family has fled.

What we can reveal is before fleeing, the family went to Jerusalem to present the child to the Lord.

According to eyewitnesses, there at the temple they encountered a man named Simeon. Simeon had been promised by the Lord he would not die before he had seen the Lord’s Messiah. When he spotted the child, his heart swelled with joy.

“For my eyes have seen your salvation, which you have prepared in the sight of all nations: a light for revelation to the Gentiles and the glory of your people Israel.”

Oh, how this world can use light and glory.

The Messiah has been born in our little Bethlehem. And nothing will ever be the same again.

This is good news of great joy, indeed.

In my musical “Bethlehem,” I tried to imagine what was going through Joseph’s mind as he picked up his crying baby that first Christmas night. Here’s the result:  “A Father’s Love (Joseph’s Song).” Please check it out! And have a wonderful, glorious Christmas.

‘A Father’s Love,’ Downloaded From God, Uploaded to iTunes