The Battle for the Soul of a University 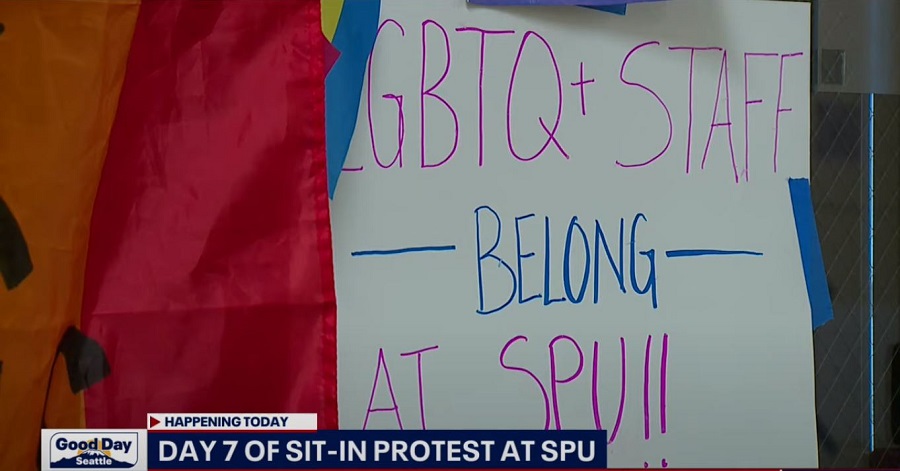 Seattle Pacific University (SPU) is engaged in a battle for its soul and future. For two years in a row, their board of trustees has taken a position at odds with most of their faculty, staff, and students. The board wants to retain SPU’s historic policy of not hiring LGBTQ+ individuals. Everyone else is yanking them in the other direction.

SPU is affiliated with the Free Methodist Church. The church’s policy is that “marriage, between one man and one woman,” is “the only proper setting for sexual intimacy.” Similarly, SPU has a Statement on Human Sexuality which “affirms that sexual experience is intended between a man and a woman.”

Things got heated in April 2021 when SPU’s board first announced it would retain the school’s historic policy. The faculty responded with a 72% vote of “no confidence” in the leadership of the school’s board. The board had taken up the issue in response to a lawsuit from Mr. Jéaux Rinedahl, a part-time nursing professor. Rinedahl alleged that he was not hired for a full-time position because he’s gay. The matter was settled out of court just a few weeks ago.

Rinedahl’s lawsuit sparked enormous controversy at SPU, as evidenced by the faculty’s strong “no confidence” vote. In response, SPU’s board agreed to reconsider their position. They formed a 14-member working group tasked with studying the issue and making recommendations. Those recommendations were delivered this April, setting up the board’s latest vote in May.

The working group’s recommendations were that SPU abandon its historic policy. Kevin Neuhouser, a sociology professor who co-chaired the LGBTQIA+ Work Group, explained:

What we argued for was a change in the hiring policy without the university coming out with a statement of affirmation. We weren’t trying to tell conservatives, ‘The university is going to say that you’re wrong.’ All we were asking from the conservative side was that they make space at the table for voices that disagreed with them.

In other words, they weren’t asking SPU to affirm, for example, a gay lifestyle. Just to make space for an employee here or there that might practice otherwise. Of course, the other side would say that a change in the hiring policy would, in effect, be an affirmation of LBGTQ+ lifestyles.

SPU faculty are claiming that these two trustees broke a confidentiality agreement by leaking the working group’s recommendations to the Free Methodist Church. Had they not done so, SPU could have changed their hiring policy and remained in good standing with the church. The leak was designed, the theory goes, to give cover to the board of trustees. To give the trustees an excuse to shoot down the recommendations of the work group and retain the historic hiring policy.

The SPU faculty are represented by a faculty senate — typical for universities, though the roles of such senates can vary widely. April Middlejans is the Chair of SPU’s Faculty Senate. She said:

What has been most distressing to the SPU community is, in fact, the way these two trustees used the power of the church to influence (or, I would argue, violate) the shared governance process we have been engaging all year as we attempt to resolve the current crisis.

The faculty senate has now issued a resolution urging the board of trustees to drop its LBGTQ-restrictive hiring policy. That resolution passed with over 80% of faculty voting in favor. On May 24, about 200 students walked out of classes to protest the board’s decision. They were shouting, “We want gay staff! We want gay faculty! Whose campus? Our campus!”

Students have now been occupying the administration building in protest. Two weeks later, they’re still there. Though classes are out of session, local students and alumni plan to continue the sit-in through the summer. Supportive staff and faculty members have been bringing the protesters food.

SPU students have started a GoFundMe page to finance a lawsuit against their board of trustees. To date, they’ve raised over $25k, with a $50k target. They’re asking for a hiring policy change by July 1. If they get it, they say they’ll donate their GoFundMe money to SPU. If not, they’ll bring a lawsuit for breach of fiduciary duty.

It’s an interesting approach, but I doubt it’s legally persuasive. Religious employers are allowed to discriminate in their hiring practices to remain consistent with their mission. Were the students to disenroll from SPU in large numbers, the revenue hit to the university would be substantial. That strikes me as a more effective form of leverage, if they’re willing to go there. Though SPU has a substantial endowment (~$126M), tuition revenue is almost certainly their lifeblood for regular operations.

On the other side of the ledger, SPU does receive some direct financial support from the Free Methodist Church, but it’s quite meager: About $324,000 over the past 40 years, per university figures. That’s about $8k per year. But there may be other financial benefits from the association. Like donors whose support would otherwise disappear.

We know that three trustees, including the recent chair, have left the board since the vote in late May. One took to LinkedIn to express his disagreement with the board’s decision.

This is all still unfolding, but it does raise the question: How long can the trustees hang on? Yes, they run the university. But if your employees oppose you in large and increasing numbers, it becomes challenging to lead them.

I wonder if lax hiring practices, particularly among the faculty, led to an employee base that’s disconnected from the school’s religious identity. Even on the board itself, only one-third of trustees are required to be Free Methodist Church members. It’s not uncommon for this fraction to be considerably higher (even 100%). It’s also not uncommon for the Christian ministries faculty to be strongly affiliated with the denomination. This becomes a ballast to prevent drift.

The key thing to watch for now is who stays and who goes. Trustees, administrators, faculty, staff, students. A large number of departures could prove to be a catalyst for change in one direction or another.