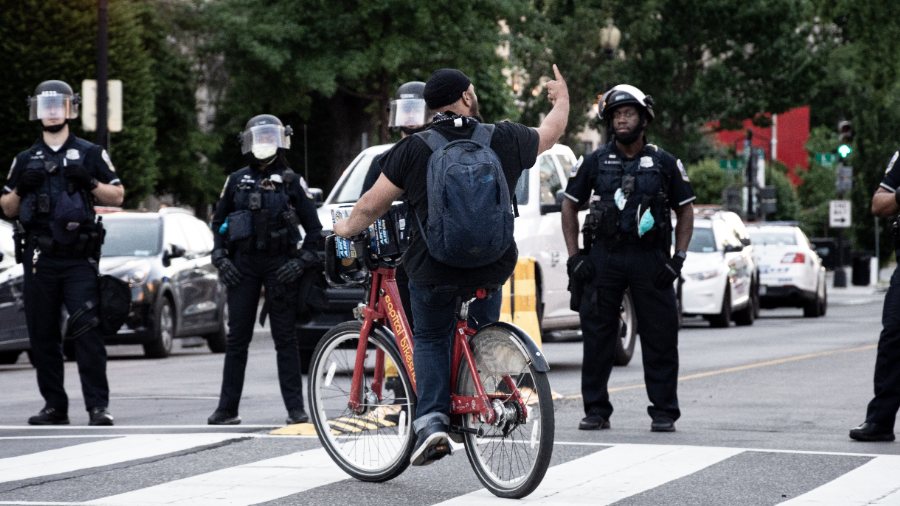 A man gestures at police officers at a Black Lives Matter protest in Washington D.C., May 31, 2020.

Someone put crazy pills in the water again last night, so let me say something wild and subversive:

Thank you for risking your neck on the front line. Thank you for helping make America livable. Thank you for facing down the mobs that have been trashing our cities. And to the hundreds of officers who have been injured in the riots so far: we love and appreciate you.

Yes, Some Officers Abuse Their Authority

Yes, I know that some in criminal justice abuse their authority. The only time I testified in court was against a cop who beat a man in the head for no great reason. A former prison guard tells me that in the old days, the prison elevator would sway as guards thumped inmates. (Reforms have changed things since, he says.)

And it is dreadful to watch George Floyd die. I hear a drumbeat of rage against the police, including from some friends. Buildings have been torched, including buildings for low-income residents. Neighborhoods have been trashed. Mobs have robbed businesses blind, upscale chains and Mom-and-Pop shops. Business owners have been beaten up. Police who also have loved ones, have already been killed.

Which is why we need you. Many people like to burn, beat, steal, drink, fight and lie, and will gladly use injustice as an excuse to commit injustice. Often one or more parents failed to stick around and teach their child how to give instead of just taking. Others have been brainwashed by radicals in the education system into believing that America is a racist state, that capitalism needs to be destroyed, or some other excuse to feel righteous as they pound on a shop owner. Most of these riots have occurred in cities run for decades by our liberal elite, inspired by the soaring rhetoric of Martin Luther King, but tempted towards more radical ideologies. We see how those ideologies play out.

America has almost 700,000 police officers. Each is a sinner. By the law of averages, some are bound to be rotten human beings, a few even sociopaths. Society screens, trains, and sends them out to protect civilization from throngs who would destroy it. Sometimes society makes mistakes. But no group of human beings would find easy that most necessary task of keeping some folk from acting like werewolves. Given the size of our country, and the number of drunk, violent, and downright feral folk in it, no amount of screening or training will prevent some injustices from occurring.

Objectively, Police are a Relatively Trivial Danger to Non-Offending Civilians

You say, “But so many cops are crooked or racist!”

I can’t pretend to know the inner thoughts of anyone but myself. But in the outer world of objective reality, police officers seem a relatively trivial danger to non-offending civilians.

On a typical day, several black men kill other black men, and several white men kill other white men. On a weekend in Chicago, it’s much worse. You will only hear about these killings if certain people, who decide what is news, suddenly decide that every life matters after all. In other words, you will not hear about them.

Fatal acts by white police officers against unarmed and non-threatening black suspects, as in the case of George Floyd, are extremely rare.

Fatal acts by white police officers against unarmed and non-threatening black suspects, as in the case of George Floyd, are extremely rare. The vast majority of men  shot by police are armed and in the process of attacking someone. More than twice as many of those shot are white as black. Surprisingly, Blacks and Hispanics are more likely to shoot and kill suspects of their own race than are Whites. (Likely because cop and suspect are drawn from the same community.)

My Brother Felt Called By God to be a Police Officer

Sunday I talked with a retired police officer with some 40 years of experience: my brother. He says he was physically attacked “thousands” of times, often by drunks. He has rushed into burning vehicles to save the driver, taken hypothermic teenagers off rafts, gone into motorcycle bars by himself to pull out a thug that had just busted someone up badly, and faced down angry mobs alone. He credits his survival to divine intervention and the prayers of members of his church.

God called him to serve as a police officer, he said, as a young man. Now that he is retired, he insists on that calling even more emphatically.

But never mind rescues in the middle of a flooding river. Think of drunk drivers. How many of your children, mothers, would be dead if police didn’t risk their necks in traffic to pull over speeding drunks? Do you want the millions of violent men now behind bars to be out on the street, unrestrained? Emasculating the police is in their professional interest. If you enjoy riots, a police force muzzled and fearful is just the ticket.

What If We Faced the Same Pressures in Our Workplaces?

And who has the right to cast that first brick?

I am a teacher. How would teachers look, if our every move were monitored by cameras and then any careless action were posted online and promoted by a broad, angry, and unscrupulous community of radicals who wished to portray us as hateful bigots?

I once helped intervene in a fight between a teacher and student in which the teacher was the aggressor. He wasn’t fired, since he was the only teacher in the school who tried to help that kid, who had few friends among his classmates. What would that scene have looked like if it had been posted online? Parents might have stormed the gates. Our school might have folded. And it wasn’t a bad school. We tried to help both teacher and student.

Thanks to smart phones, we see how an anecdote can lie, and how a lie can destroy a city. Now no one needs to say, “The Jews are poisoning the wells!” We watch the video of a single case online, and false generalizations justify themselves.

Society (especially cities run by Democrats) has sown the wind, and is reaping a whirlwind. Left-wing ideology railed against “patriarchal marriage”: Marriage is almost dead in the inner city. The media, educated under posters of Martin Luther King, Gandhi, and sometimes Malcolm X, encourages us to spot white racism under every rock, especially a few months before an election. Criminals were even let out of prison in time to join the mobs.

Then to keep us safe, society commissions that thin blue line.

To be effective, police foster a team spirit that, unchecked, can morph into groupthink or an us-versus-them mentality — which may explain why those three other officers failed to act.

No need to be sentimental. Every officer is also a sinner, subject to the same forces of social dissolution that act on society as a whole. Dealing with the roughest elements of society can have a hardening effect over time. And to be effective, police foster a team spirit that, unchecked, can morph into groupthink or an us-versus-them mentality — which may explain why those three other officers failed to act. It is an inherently difficult balance to find and keep, day after day.

But let us thank America’s officers of all races and creeds, for trying to keep that balance. Thank you for keeping the beast in us (and yourselves) mostly in check. Thank you for putting up with insults, spit, and often punches, and keeping our communities safe.

I’ll even say thanks for those speeding tickets. They were well-meant, I realize.

Reader, last night, fellow citizens possessed by the devil may have trashed your hometown. Here’s a suggestion. Grab a broom and some work gloves, and join the crowd of all races cleaning up the next morning. Show the world that America is not dead yet. And bring some flowers along. Give them to an officer of the law, and tell him “thank you” from all of us.

David Marshall holds a bachelor’s degree in the Russian and Chinese Languages and Marxism, a master’s degree in Chinese Religions, and a doctoral degree in Christian Thought and Chinese Tradition. His most recent book is Jesus is No Myth: The Fingerprints of God on the Gospels.