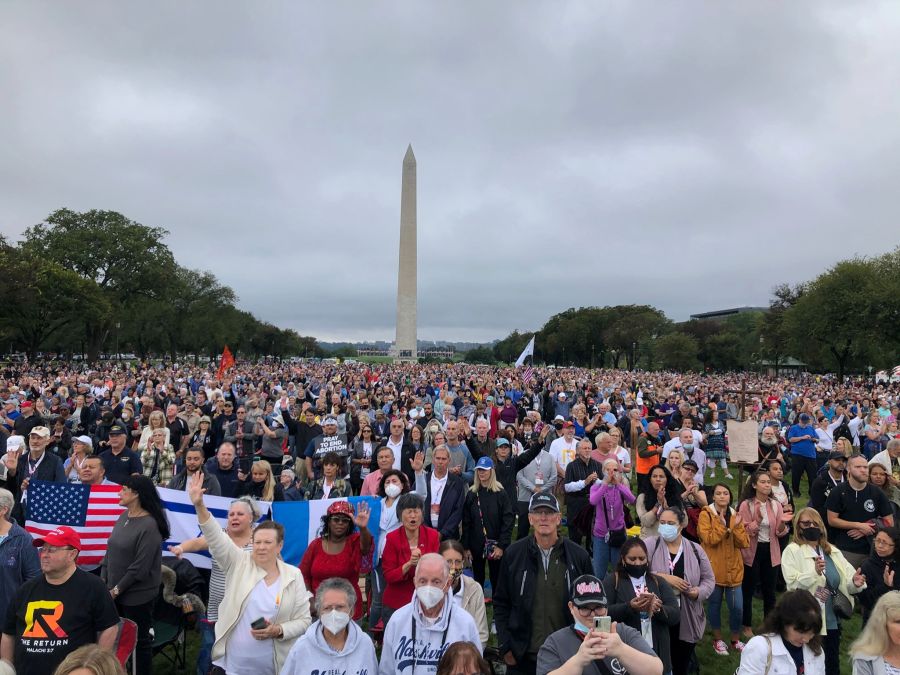 Did you hear about the large Christian gatherings in Washington, D.C. this weekend? Did you see the news reports about the mayhem? The looting? The vandalism? The calls to “Burn it down!”? Did you hear the speakers calling for acts of violence and destruction? Oh, you didn’t? That’s because tens of thousands of Christians did gather in D.C. this weekend, but they came to pray for the nation and repent for their sins.

The two main events were The Return, which began Friday night and ended Saturday night, and Franklin Graham’s prayer march, which was held from noon to 2 p.m. Saturday afternoon.

Both events attracted tens of thousands, and The Return was watched by a reported global audience of tens of millions. But there were no angry voices. No calls for violence. No fistfights. Or brawls. Or looting. Or shooting at police.

In fact, at The Return, where I participated on Saturday, there was hardly any police presence at all. It was not needed. I didn’t even see any counter-protesters.

The goal of The Return and Prayer March 2020 is not to impress people. The goal was to get the attention of our Father in heaven.

And while a constant theme of the events was the broken condition of America and the urgent need for repentance, that repentance started with the participants, with each of us. We, the followers of Jesus, have sinned and fallen short. We who are called to be light of the world and the salt of the earth have not lived up to our high and lofty calling.

That’s why The Return began its Saturday morning program with pastors and leaders asking for God’s mercy and confessing their sin. Repentance starts with us.

Significantly, Saturday was also the day when President Trump announced his nomination of Amy Coney Barrett to replace the late Ruth Bader Ginsburg. Who could have foreseen this? These events were planned months in advance, at which time no one had any idea that Justice Ginsburg would pass away, let alone pass away during this sacred season on the biblical calendar.

Even the timing of Trump’s announcement seemed propitious. As I tweeted, “So, Ruth Bader Ginsburg passes away at the beginning of the Jewish New Year, as the shofar blast is heard, & Amy Coney Barrett is announced as her replacement as shofars were being blasted at The Return event in DC, watched by 10s of millions globally. Coincidence?”

On this same day, Saturday, September 26, 2020, major prayer gatherings were held in the Philippines and other nations as well. (An Asian leader told me at The Return that three million Indonesian Christians participated in a prayer event just hours earlier.)

The Scale of Justice, a Plea for Mercy

But this is exactly what we must do. We are in the midst of a global pandemic, a global shutdown, a time of global shaking — and that means there nothing more important we can do than pray. All the more does this hold true in America, where deep divisions are literally tearing us apart.

But the goal of these gatherings is not to impress people. The goal is not to put on a performance and please the crowds. The goal is to get the attention of our Father in heaven. Only He can turn the hearts of a nation. And only He can hold back His judgment and wrath.

In Jewish tradition, the constellation sign associated with Tishrei, the seventh (and current) month of the biblical calendar (but the first month of the traditional calendar), is a pair of scales, symbolizing the scales of justice.

The symbol of the month of Tishrei is a pair of scales.  How fitting are the scales of justice to this month!  On the Day of Judgment, Rosh Hashanah, our good deeds and mitzvos (commandments) are weighed against our sins.  If we have more mitzvos than sins, we are inscribed for another year of life.  Obviously, this is not a quantitative evaluation, that is, the number of offenses verses the number of good deeds.  The judgment takes into account the quality of our deeds.

That’s why we plead for mercy. That’s why we repent so deeply. That’s why, in the synagogues, beginning Sunday night, Jewish prayers will focus on pleas for mercy and lengthy confessions of sin. There is no boasting of our own righteousness in the sight of a holy God.

That’s why these gatherings in D.C., with minimal press coverage and without the drama of the protests and the riots, could well be the thing that saves the nation. And while the media may not have paid sufficient attention, we trust that God Himself did.

That is what really matters.

Editor’s note: Be sure to watch Dr. Brown’s recent interview with Stream publisher James Robison: Can We Vote for Trump Without Hurting Our Christian Witness?