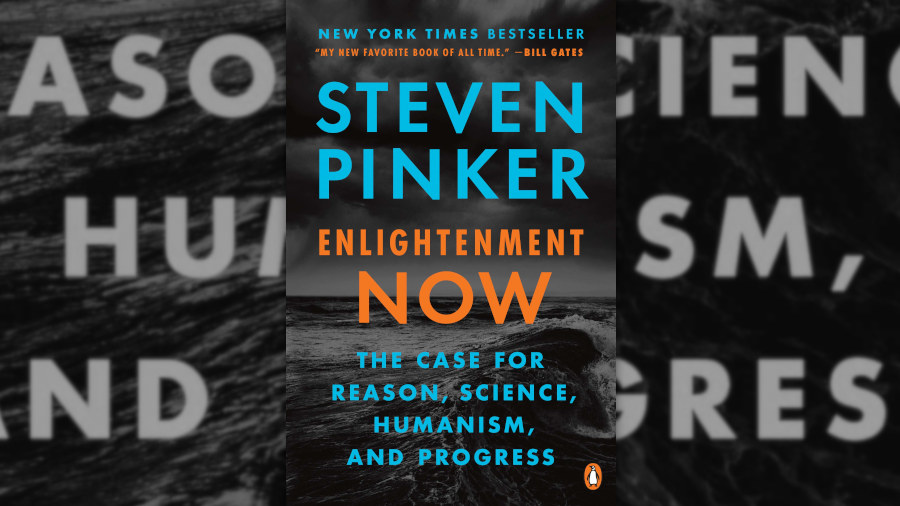 Last year, Harvard psychologist Steven Pinker published a book called Enlightenment Now. If you think the antichrist will lead a War on History before training his guns on the Kingdom of God, this book may be a sign of the times.

The forces of ignorance have already undermined historical literacy, so glowing reviews of Pinker’s argument were not hard to find. But few gushed over Enlightenment Now with greater enthusiasm than Bill Gates: “It’s my new favorite book of all time!”

Gates has some excuse for fawning. He’s a computer nerd, not a humanities scholar. Perhaps it is humble to trust a famous Harvard professor in such matters, even if the prof’s expertise is also in the wrong field.

But someone as worldly as Gates, with a Catholic wife, and who sponsors work in Africa where Christians have done so much for so many, ought to know better. Just as computers “evolve” only through human action, so serious reform of the human soul is best guided by the One who formed it in the first place.

The Ideals of the Enlightenment

Pinker offers facts and argument. Gates focuses on the former. Pinker’s book, he says, “opens with an argument in favor of returning to the ideals of the Enlightenment — an era when reason, science, and humanism were touted as the highest virtues. … I’m all for more reason, science, and humanism, but what I found most interesting were the fifteen chapters exploring each measure of progress.”

It is undeniable that in many ways, life on this planet has greatly improved even over the few short years I’ve walked across it. I’ve often swum in the clear waters of a once-polluted Lake Washington behind my hometown of Seattle, for instance, sometimes glancing at the house Bill Gates built on the far bank. The apple I’m eating as I write these words in northern China is vastly improved over the shrunken, sour specimens poor ladies used to sell passengers when their buses stopped in small towns back in the ’80s.

Billions of similar anecdotes offer a generally-convincing picture of progress. The main problem with the book is the humanistic buns that hold the meat contained in these fifteen chapters. I mean Pinker’s crumbly, wafer-like argument, placed on either end of his book to sandwich the data, that the Enlightenment is responsible for these blessings.

Christianity and the Enlightenment

Gates should know better even from his own field. Scientific progress was increasingly rapid for hundreds of years before the dawn of the Enlightenment. Blaise Pascal, who blazed early paths in computer science, died more than a century before Kant wrote his famous essay touting the Enlightenment. And while Pinker mentions Pascal as if he represented the Enlightenment, in fact he was a zealous Christian who lived long before it dawned.

And Pascal used reason — as had believers for millennia — to argue powerfully for the Christian faith.

Gates cares about progress, and with his wife has contributed to it. Mothers see babies live past two. Fruit tastes sweeter. Lakes are cleaner. Dirty clothes can be washed automatically while you post photos of your beagle doing cartwheels on Facebook. One would have to have a heart of stone to deny that most of this is good news indeed. Thank God, and everyone who “gives a cup of water” in Christ’s name, or even in the name of kindness.

But where does progress truly originate? Gates accepts Pinker’s explanations too quickly. Has war really gone out of style thanks to humanistic moralizing? Gates summarizes: “War is illegal. This idea seems obvious. But before the creation of the United Nations in 1945, no institution had the power to stop countries from going to war with each other. Although there have been some exceptions, the threat of international sanctions and intervention has proven to be an effective deterrent to wars between nations.”

What Do We Make of the Current Relative Peace?

Let me mention three problems with this account of the present relative lull in fighting.

First, the power that best prevented war after World War II, was the United States with its allies. America and company stopped the Kim crime family and their Chinese backers in Korea. American power tamped down warfare for a time, as Great Power politics predict. In the same way, each time a new emperor unifies China, a great dynasty enjoys a period of relative peace.

Second, we nevertheless almost had a nuclear war or two. That would have blown the top clean off Pinker’s cheery charts.

Third, Pinker fails to take into account the cyclical nature of fighting. Oddly, he begins his chart with the year 1945. Why not start with the Enlightenment itself? Because war, not peace, broke out in its immediate wake. For all we know, this present peace is just a calm in the eye of the storm. If China attacks Taiwan, Indian and Pakistan rumble, or Israel and Iran come to blows, most eyes will turn to the White House, not the U.N., for a solution.

The fact that Pinker happens to write during what may be the eye of the storm is hardly evidence that Enlightened humanism saved us.

The Soil of Biblical Tradition

Furthermore, most of the progressive movements Pinker lauds began long before Kant, Voltaire or Hume. And most sprang from the soil of biblical tradition. The statue of a man beating a sword into a plowshare in front of the U.N. portrays an image from the prophet Isaiah.

History is messy. But I think Jesus explained progress better when he described himself as the “light that has come into the world.” Having written about one or two minor aspects of how Jesus has changed the world for the better here before, I would gladly debate the big picture with Dr. Pinker.

Gates is fair enough to mention two other problems with his “new favorite book of all time.”

First, he wishes that as a psychologist, Pinker had written more about why we tend to focus on bad news. Indeed, it is odd that so many shrinks suppose they can explain the rise of science, the end of the Cold War or Christianity when they know little about such topics.

Second, Gates notes, Pinker is “quick to dismiss the idea of robots overthrowing their human creators.” Gates doesn’t expect Terminator to show up at our doorsteps. But he does admit concern about what controls AI, and the social implications of automation.

Interesting that Gates’ main criticism of Pinker’s book lies in Gates’ own field. And that Pinker has so little to say about his own field. In the end, Enlightenment Now casts only a weak light on history. But it reveals a God-shaped shadow of egoism on the soul of many intellectuals. It is in that shadow that our enlightened thought-molders seem to hide from the true Light that has come into the world.

Dr. David Marshall is author of several books, including Jesus is No Myth: The Fingerprints of God on the Gospels, and How Jesus Passes the Outsider Test for Faith. While living at present in coastal China, David has also hunkered down long-term in Japan, Taiwan and England, as well as his native Seattle and adopted Southeast Alaska. David holds a B.A. in the Russian and Chinese Languages and Marxism, an M.A. in Chinese Religions, and a Ph.D. in Christian Thought and Chinese Tradition.