Wow! J.J. Abrams Smuggles 3 Conservative Truths Out of Liberal Hollywood and Into #StarWars 7

I caught Star Wars: The Force Awakens on opening night and loved it — and not just for the solid acting and special effects.

I’m grateful to the makers of Star Wars: The Force Awakens twice over. The galaxy far, far away is once again home to deftly scripted heroes you want to root for rather than spank and send to their rooms for mass murder and awful dialogue. And then there’s this: Big-time Democratic donor J.J. Abrams and his team somehow managed to smuggle three conservative truths out of the liberal death star that is Hollywood and into The Force Awakens.

Since the movie was designed to be a crowd-pleasing blockbuster, it was bound to convey many of the truths that right-of-center America prizes, truths we tend to take for granted in such movies — that good and evil aren’t mere social constructs; that fighting and killing in the cause of a just war is right and praiseworthy; that pluck and hard work should be rewarded. On and on we could go with truths written on the human heart and that, by the grace of God, even many Hollywood liberals still share.

But The Force Awakens goes a step further by embodying three truths that are deeply conservative, and widely misunderstood and ignored.

1. The Force Awakens gets that free societies require strong families and fathers.

At the end of The Return of Jedi, the freedom fighters have overthrown the dark and dictatorial empire, but a generation later all those gains are in peril. (Spoiler alert) One reason: Han Solo and Princess Leia’s son has gone over to the dark side and placed his Jedi gifts in the service of a new Sith Lord. The backstory: Leia and the good-hearted but semi-lawless Solo had a difficult marriage and, at some point, Leia sent their young son off to be trained as a Jedi by her brother, Luke. 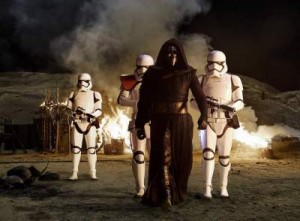 At some point the arrangement went sideways and their son was seduced by the dark side. Now, years later, she tells Han that she regrets sending their son away. He needed his father in his life more than the opportunity for Jedi training.

I’m guessing the scene resonates with most audience members, liberal and conservative, because it’s rooted in a truth about fathers written on the human heart and widely confirmed by human experience. All the same, political progressives don’t get to claim this truth for their ideology. They may feel genuine personal affection for the idea of intact families. Some of them are excellent fathers themselves. But their policies and ideas have had the unfortunate and mostly unintended consequence of undermining the family.

Progressives have attacked the idea of male headship in the family. They have championed the idea that gender differences are mostly a social construct to be redefined to meet personal desires. And they have long promoted welfare policies that render fathers economically redundant, fueling a rise in absentee fathers and out-of-wedlock births far beyond anything that existed before these ambitious welfare programs came along fifty years ago.

The rate of intact families among the poor of America used to be similar to what it was among the middle and upper classes. All that changed with the welfare state. Liberals are willing to live with this. Conservatives aren’t.

The conservatism in The Force Awakens runs deeper still here. Leia urges (another spoiler alert) Han to seek out their lost son and plead with him to abandon the dark side and return to them. The attempt is noble and well intentioned but, suffice it to say, the attempt goes very, very badly. It’s not that sudden conversions can’t happen. It’s that a single father-son talk rarely undoes years of negligent parenting and habits of evil. Virtue and freedom for excellence are not created overnight. They require a rejection of the progressive feel-good ethos that says “if it feels good, do it.” They require a commitment to unfashionably conservative things like self-discipline, self-denial and duty. There are progressives who embrace these things in their personal lives, including the filmmakers behind this movie, but this doesn’t change the fact that these values are hallmarks of conservatism, not progressivism.

2. The Force Awakens understands that libertarian anarchy is a poor defense against the totalitarian impulse.

In Star Wars: The Force Awakens, the First Order holds a massive Nazi-like outdoor rally, and in a ringing speech to the gathered throng, General Hux excoriates the Republic for its chaotic disorder. Although he’s clearly a villain, his criticism is partly true. The glimpses we get into life under the Republic suggest a galaxy that enjoys precious little rule of law for the poor and a great deal of chaos. The scavenger orphan Rey, who turns out to be the movie’s lead character, survives against organized crime only with luck, pluck and an unusual facility for turning her staff into a defensive weapon. General Hux shrewdly exploits this anarchic disorder in the service of his totalitarian ambitions.

Conservatives share with libertarians a passion for smaller government and human liberty, but conservatism emphasizes that only ordered liberty — characterized by the rule of law for rich and poor alike — is a sufficient defense again the totalitarian impulse. Where the rule of law fails through rampant crime, political corruption and government-business cronyism, many will embrace a promising new source of order even if it’s wearing the steel-toed boots of the militant fascist.

The Force Awakens could have simply pitted totalitarianism against freedom, but it went a step further, making the fundamentally conservative and more complex distinction between law-of-the-jungle freedom and ordered liberty.

3. The Force Awakens gets that in politics, there are no permanent victories.

The Return of the Jedi ended with the evil empire utterly vanquished, and it might have looked like smooth sailing for the restored Republic as far as the eye could see. But a generation later, the Republic is unraveling and The First Order, the latest manifestation of the dark side of the force, is pressing its advantage.

There’s a parallel to this in our world. After the Soviet Union fell a generation ago, there was a lot of silly talk about “the end of history,” with democratic capitalism viewed by some as the unchallenged victor in the battle of ideologies. But a few short years later radical Islam strode onto the world stage, socialism reasserted itself in various corners of the globe, and Russia morphed into a brutal, dysfunctional kleptocracy.

Conservative commentator William F. Buckley, Jr. said there are no permanent victories in politics, only permanent battles. Ronald Reagan said freedom is never more than a generation away from being lost. This is a conservative insight because it’s anti-utopian. Conservatives get that the human heart is bent, that each generation must cultivate the virtues of ordered liberty, and that there’s no getting to a new man beyond the fall through some cleverly progressive political arrangement. The creative team who scripted The Force Awakens may be Hollywood liberal, but they are apparently far enough along the spectrum toward conservatism to get this old truth.

The film’s top two scriptwriters, J.J. Abrams and Lawrence Kasdan, are both Jewish, and the creator of the Star Wars universe, George Lucas, was raised Methodist.* Who knows? Maybe they absorbed the biblical stories of sin and redemption, of proud kingdoms brought low by folly and rescued by mighty warriors aided by, and serving, the force above all other forces. Maybe they absorbed those old truths so thoroughly that they couldn’t help but work them into their movies. The filmmakers have at least two more Star Wars films to make. May the Force, the true Force, be with them.

Jonathan Witt is managing editor of The Stream, a former professor of English and American Literature, and author, with Jay W. Richards, of The Hobbit Party: The Vision of Freedom That Tolkien Got, and the West Forgot. Follow him on Twitter @JonathanRWitt.

* In an earlier version I mistakenly said that Lucas was Jewish. H/T to Kathryn Judson for the correction and for calling my attention to this helpful look at Lucas’s religious outlook, which he has described as “Methodist Buddhist.”

COVID-19 and the Trolley Problem: You’re on the Tracks and the Government is Controlling the Switch