On Wednesday, the Supreme Court will hear oral arguments in Zubik v. Burwell, a challenge by Catholic nuns from Little Sisters of the Poor to the Obamacare mandate forcing them to violate their faith by providing contraception. Contraception such as the morning-after pill can act as an abortifacient, so the nuns do not want to include it in employees’ health coverage.

With the advent of Obamacare, there is no reason why employees can’t turn to that as an alternative to their employers’ health insurance if they want contraceptives. After all, Democrats entitled it The Affordable Care Act because it is supposed to be a viable, affordable new option. Regardless, even without insurance, contraception is extremely inexpensive, merely $9 a month at Target for anyone and costs nothing for women who visit Planned Parenthood and claim they are low income. Planned Parenthood provides doctors at no charge to low-income women.

The nuns argue that the mandate violates the Religious Freedom Restoration Act, since the government has not proven that this compulsion is the least restrictive means of advancing a compelling interest. A less restrictive means of providing inexpensive contraception would naturally be Obamacare.

The government already exempts 1 in 3 Americans from this mandate, and permits big government agencies and municipalities like the U.S. military (the world’s largest employer), New York City and companies like Exxon, Pepsi Bottling, Chevron, and Visa the freedom to decide not to comply with the mandate, even just for reasons of cost or convenience. Yet the government refuses to exempt the Little Sisters from the same mandate based on their religious beliefs. About 45 million Americans1 are on “grandfathered” employer plans2 that are required to comply with some of the ACA, like covering dependents up to age 26, but are exempted from the contraception mandate.

Strangely, the Supreme Court previously ruled in Burwell v. Hobby Lobby Stores that closely-held, for-profit businesses do not have to provide contraceptives to female employees under the mandate. This despite the fact there is nothing religious about the businesses, other than being owned by Christians with strong religious objections. It will be difficult for the Supreme Court to allow that exemption but not one for the nuns. There, the court ruled that it was acceptable for the government to provide alternative coverage.

In January of 2014, the Supreme Court issued an order granting an injunction to the Sisters of the Poor while their lawsuit was pending, allowing them to avoid the Obamacare contraceptive mandate while the case was being decided, provided they produced evidence of their religious nature and objection. But this has left everything in limbo, unclear whether they would even receive the waiver.

Obamacare mandated that insurance companies must provide preventive services and health screenings for women, but did not specify what that would cover, leaving it up to federal agencies to interpret, so The Department of Health and Human Services promulgated the rules requiring contraception.

The case has been consolidated with similar challenges from other Christian nonprofits; religious non-profit schools, colleges, hospitals, charities and Roman Catholic clergy. They include Priests for Life, Southern Nazarene University, Geneva College, Roman Catholic Archbishop of Washington, and East Texas Baptist University. It ended up with the name Zubik v. Burwell, due to plaintiff Most Rev. David A. Zubik, the Roman Catholic bishop of Pittsburgh, and defendant Sylvia Mathews Burwell, the Secretary of Health and Human Services. Plenty of amici briefs have been filed.

With the late Justice Antonin Scalia no longer on the court, there is a very good chance the Supreme Court will split 4–4. When that happens, the lower court’s opinion is affirmed, but it doesn’t set a precedent and the lower courts remain split. So the decision would stand in the circuit where the challenge was brought only, the Tenth Circuit Court of Appeals, which ruled against the Little Sisters. The other likely outcome is the swing vote on the court, Anthony Kennedy, will side with the four liberal justices against the Little Sisters, making the mandate law across the country.

The Becket Fund for Religious Liberty, the law firm defending Little Sisters of the Poor, recently launched a website explaining the case and addressing what it perceives are misrepresentations by the government. Below is a cartoon from the site explaining the dilemma. 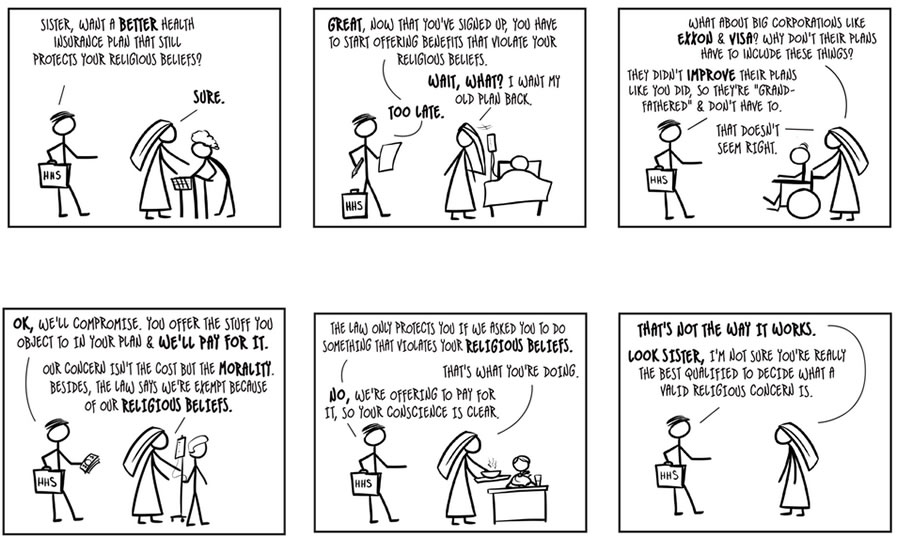