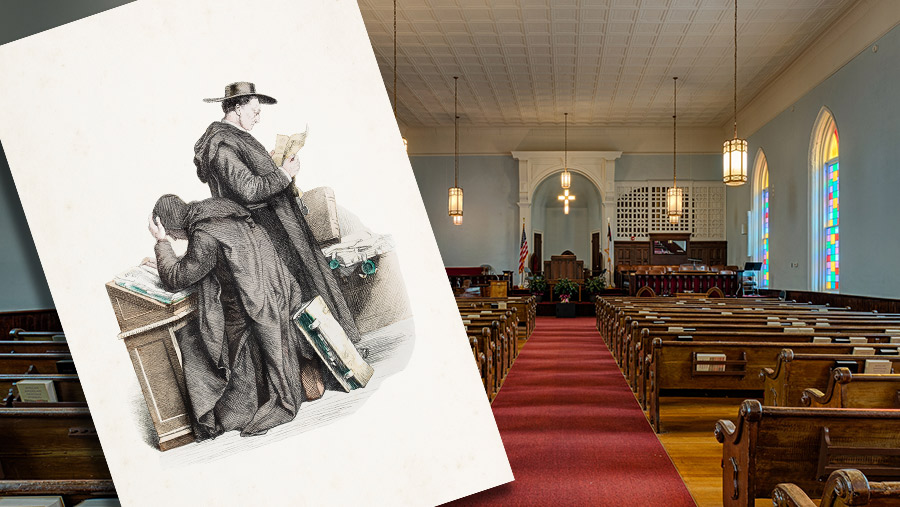 Last night a standing-room only crowd showed up at the National Press Club to hear Rod Dreher explain what exactly he means by the “Benedict Option,” the subject of his just-released book.

The event, sponsored by the Trinity Forum, opened with Pete Peterson, dean of Pepperdine University’s School of Public Policy, acknowledging the irony for most of the attendees at the Washington, DC event: Many of those most concerned with discussing the Benedict Option have institutions that engage the political sphere.

Christians of all stripes and professions were present. There were homeschooling moms, evangelical pastors, college students with their ties on crooked, monks in brown robes, journalists, and at least one U.S. senator.

Dreher opened by addressing one of his critics’ common complaints. “I am an alarmist,” he told the crowd, but he believes he has good reason. He says that we’re on the same path as secular Europe and that a pseudo-religion of Moralistic Therapeutic Deism is hollowing out Christianity in America, leaving us “spiritually depleted and morally exhausted.”

“It’s not the world, but a world that is coming to an end,” Dreher warned, citing Pope Benedict XVI’s statement that we are living through a period of disruption comparable to (or “the greatest spiritual crisis since”) the fall of the Roman Empire.

And like Rome, the greatest threat to the church in America is not from without, but within. Dreher looks to Saint Benedict, who founded the monasteries that went on to preserve civilization through the Dark Ages. Benedict included a small pamphlet as a rule of life for his monks, and Dreher makes the bold claim that this plain directive saved Western civilization as the monasteries followed its directions.

The challenge, as Dreher sees it, is how to function as Christians whose souls are formed by the church rather than by corrosive cultural forces, whether they be liberal dogmatism or radical individualism.

The actual content of Dreher’s proposal seems modest when compared to the buzz surrounding his book. Eight values cribbed mostly from the Rule of St. Benedict work together to bind Christian communities closer to Christ and each other. They are: order, prayer, work, asceticism, stability, community, hospitality and balance.

Dreher quickly emphasized that the Benedict Option must include evangelization and serving our neighbors. “It’s a strategic separation from the everyday world,” a paradox Dreher describes in biblical terms as “a people set apart in order to bless the world.”

Dreher cited Jeremiah 29 as the model for Christians in exile to settle, integrate, but not assimilate. The challenge, as Dreher sees it, is how to function as Christians whose souls are formed by the church rather than by corrosive cultural forces, whether they be liberal dogmatism or radical individualism. Dreher stressed that this is a middle way between fundamentalism’s complete isolation and accommodationist apathy.

While some conservative Christians are relieved to find Trump in office rather than Hillary, Dreher warns that this doesn’t mean Christians are guaranteed religious liberty protections. He notes that no executive order on religious freedom has come from the Trump White House yet. Still, Dreher said that “even if Donald Trump were some combination of Pericles and Billy Graham,” Christianity in America would be in crisis because “the problem is us.”

Dreher warns that Christians will be assimilated living so closely with the corrosive influences of the world, and current strategies are failing. “Winsomeness must never be a veil that conceals our cowardice from ourselves,” Dreher said. He urges political engagement to be locally focused, with national efforts for important work such as defending religious liberty.

The prognosis he gives American culture is dire, but not despairing. His argument is animated by hope, which he said is “memory plus desire,” the imaginative vision of what Christian flourishing could be in a time of great testing.

The discussion between Dreher and his critics was respectful, but showed clear dividing lines. Dreher’s critics on the left and right have different but comparable issues with his analysis.

Kirsten Powers said she “wondered about the timing” for his alarms. “Why is this the breaking point?” she asked. “Is it that white Christians aren’t in charge anymore?”

“Spiritual disciplines, living in community … this is just what being a Christian is. Why do we need to call it something special?” Powers asked.

Dreher responded by saying that college professors are telling him that there is something different about the next generation of Christian college students. They are coming to school unformed and unable to answer basic questions on the Christian faith. He acknowledged that many things are much better now, particularly for women, gays and minorities, and he doesn’t have any illusions about past utopias.

But, he replied, “Today we don’t have a common standard by which to judge our behavior and repent.” Dreher cited the civil rights movement, where Martin Luther King, Jr. was able to appeal to an unjust white society on the grounds of a shared Christian framework.

Peter Wehner was more appreciative of Dreher’s work overall. He noted that “Rod is a true believer in an increasingly complacent time” who offers a “challenge to those who have not been formed by love for Christ.” But he said Dreher was “too broad” and “imbalanced” in his analysis, particularly when he cites the Enlightenment as the source of all ills.

“The problem is the human heart,” Wehner said, “not enlightened liberalism.”

To counter Powers’ claim that the Benedict Option is a “selfish” withdrawal from the society, Dreher emphasized how strong Christian formation is necessary in order to empower Christian hospitality.

“Spiritual disciplines, living in community … this is just what being a Christian is. Why do we need to call it something special?” Powers asked.

Dreher agreed that the Benedict Option is basically “a call for the church to be the church,” but that we need it because young people especially are unformed, have no practices, and could be easily swayed by the dominant culture. He poignantly cited the failure of the white church to confront racism in the mid-20th century and warned that something similar could happen today. “Countercultural Christianity might prevent it.”

The Importance of Christian Formation

Dreher concluded the discussion with a personal anecdote from his own faith formation. As a new Catholic Christian in his twenties, he recounted, he had volunteered once in a soup kitchen but decided that he “was really more of an intellectual and should read books on theology.” He never volunteered there again, content instead to make his faith a matter of right thinking.

When as a reporter he found himself covering the sex scandals of the Catholic Church, his orthodox knowledge was not enough to sustain him. He eventually came back as a member of the Orthodox Church. But the experience taught him the need for orthopraxy — embodied practices, especially those that involve working with our hands — to shore up orthodox Christian belief.

Dreher’s analysis is dark and perhaps flawed, but his vision of the church and the power of Christian communities is joyful and captivating. At its best, his book will encourage a conversation among Christians about how the to live faithfully in our current climate, and that, as the crowd last night can attest, is a good discussion to have.

The Religious Right Drove People Away and Helped Create the ‘Nones’

Pro-Lifers Are Scapegoats, Just like the Babies They Try to Save

Is Christianity in America Toast?